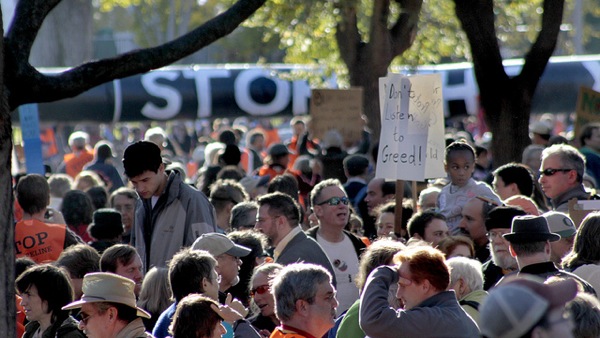 Protests at the White House in 2011 against the Keystone XL pipeline. Credit: tarsandaction/CC by 2.0

Without action from Congress, the president is unable to make a comprehensive effort to combat climate change. Nonetheless, the piecemeal new goals are the most far-reaching attempt yet by a U.S. president to coordinate national planning of mitigation and adaptation efforts on greenhouse gas emissions and climate change.

At a major speech here in Washington, the president also directly commented on the contentious Keystone XL pipeline, proposed to bring particularly dirty “tar sands” oil from Canada to refineries in the United States. For the first time, Obama said Keystone-related emissions would affect his decision to approve the project, directly linking the U.S. national interest with climate change.

“This was a milestone speech in two aspects: President Obama made clear he’s not afraid to tackle coal as the primary culprit of climate change, and he made a major pivot in how he framed Keystone,” Daphne Wysham, co-director of the Sustainable Energy and Economy Network at the Institute for Policy Studies, a Washington think tank, told IPS.

“He’s no longer talking about jobs or energy security, but rather linking our national interest to whether the project would have a major impact on the changing climate. This puts the issue into an entirely different court – and one where we believe we can win.”

Obama said the new measures would get the United States back on track to cut its greenhouse gas emissions by 17 percent below 2005 levels by 2020. The president originally set this goal three years ago, but Congress has since failed to institute policies that that could allow for such a decrease.

The centrepiece of the plan is a crackdown on carbon pollution from power plants, both planned and – in a highly anticipated move – existing. In the United States, power plants are responsible for some 40 percent of carbon emissions.

“We limit the amount of toxic chemicals like mercury and sulphur and arsenic in our air or our water, but power plants can still dump unlimited amounts of carbon pollution into the air for free,” the president stated Tuesday. “That’s not right, that’s not safe, and it needs to stop.”

While Obama’s new assertiveness was lauded by environmental and health groups here, advocates were particularly electrified by the surprise indication of the president’s views on the Keystone XL proposal. While currently in the approvals process, the pipeline will ultimately require Obama to personally certify that the project is in the “national interest”.

"On the international level, the promises for action, while welcome, are too little too late."
-- Saleemul Huq

“[O]ur national interest will be served only if this project does not significantly exacerbate the problem of carbon pollution,” the president said. “The net effects of the pipeline’s impact on our climate will be absolutely critical to determining whether this project is allowed to go forward.”

Much of the president’s new vision revolves around the ability of the Environmental Protection Agency (EPA) to enforce regulations under a key piece of decades-old legislation known as the Clean Air Act.

While the EPA was supposed to issue new rules for regulating power plant emissions in April, it missed that deadline. That failure almost prompted a lawsuit from environmental groups, which halted their plan only when it became clear in recent days that the president was planning this major address.

Even with the EPA now mandated to develop rules to limit emissions from existing power plants, that process will take at least two years, and experts say implementation could take a decade. Still, industry analysts are suggesting that the knowledge of an official timetable will now lead owners of some coal-fired power plants to decide against repairing plants that could operate only for a few additional years.

On Monday, Daniel Schrag, a White House science advisor, made waves by declaring that the president should use Tuesday’s address to declare a “war on coal”, a phrase that conservatives are now using to batter the president’s new plan. For environmentalists, however, this combative stance towards coal is welcome.

“The president has a lot of power through executive action, and EPA regulations on carbon are going to be essential in the broader transition from coal to clean energy,” Whit Jones, an activist with the Energy Action Coalition, an advocacy umbrella group, told IPS from outside the president’s speech here in Washington.

“Ultimately we will clearly need to demand Congressional action, but this is still a very exciting first step. Once the president shows strong action on climate change, we will expect him to follow up and continue the transition away from fossil fuels.”

Further, the implications of the president’s coal proposals will extend beyond U.S. borders.

“Today’s speech takes previous actions much farther, to call for an end to almost all U.S. government support for public financing of coal plants overseas,” the Institute for Policy Studies’ Wysham said. “That would rule out, for instance, coal-fired plants in India and South Africa, two of the most recent recipients of World Bank funding for coal projects.”

The new plan goes well beyond power plants as well, with the president laying out steps to bolster the development and use of renewable energy, strengthen energy and fuel efficiency, and end energy subsidies for fossil fuel companies.

Some of these proposals will require approval by Congress, however, where conservative lawmakers have moved quickly to disparage most of the new proposals. The top conservative leader in the House of Representatives, John Boehner, dubbed the plan “absolutely crazy”.

“On the international level, the promises for action, while welcome, are too little too late,” Saleemul Huq, a senior fellow in the Climate Change Group at the International Institute for Environment and Development, a London think tank, said Tuesday.

“While it is good to see a leader of the world’s richest country and biggest cumulative polluter finally promise to take actions, after over a decade of refusal to do so, the problem has become much bigger while the U.S. was ignoring it.”