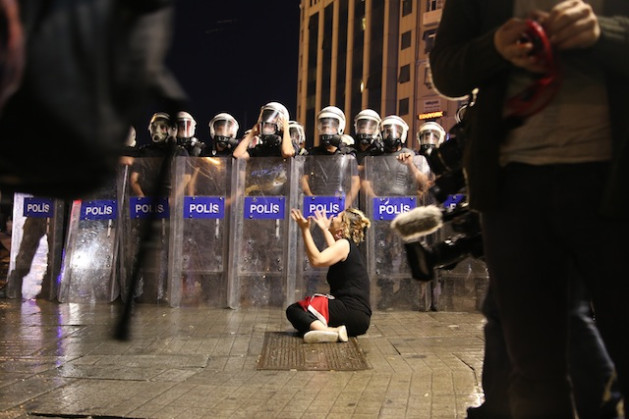 In a statement on Jun. 18 Pillay said, “The atmosphere is still…highly combustible, it is important that authorities recognise that the initial extremely heavy-handed response to the protests, which resulted in many injuries, is still a major part of the problem.”

The Turkish Medical Association last week reported nearly 7,500 protest-related injuries since the occupation of the park began at the end of May, and at the time of writing six have died.

Pillay urged the Turkish government to take “all necessary measures to ensure that police forces do not resort to excessive use of force… The aim should be to minimise damage and injury, and respect and preserve human life.”

The protests began as a peaceful complaint over land use in Gezi Park – an island of green in the middle of the concrete Taksim Square – but expanded swiftly into an anti-government uprising in many cities around Turkey.

One of the 50 original Gezi Park protesters, who asked to be identified only by her first name, Bengi, told IPS: “I have been a part of the protest from its very beginning. I’m not surprised at the police violence, as Turkey has a tradition of violence, suppression and police brutality.”

She acknowledged that attempts over the last decade to move closer to EU succession have led to a decrease in open state hostility, “so in a sense this reaction could be seen as strange.”

Expected or unexpected, the violence has been extreme and has grabbed media attention and the eyes of the world’s leading rights bodies, with watchdogs like Amnesty International and Human Rights Watch strongly condemning the actions of heavily armed security forces against peaceful demonstrators.

Bengi sees this violent response as a direct result of Prime Minister Recep Tayyip Erdoğan’s “wayward” decision making. “The Prime Minister has shown a lack of effective management, and simply wants to prove to the people that what he says will be done.”

Many have questioned Erdoğan’s administration of the police force since the protests began, including the widespread use of gas canisters against the population.

Two protestors are reported to have died due to gas canisters; Abdullah Comert, 22, a youth member of the opposition Republican People’s Party, was killed after being struck in the head by a canister in Hatay, close to the Syrian border in southern Turkey, while cleaning worker Irfan Tuna died after having been subjected to powerful tear gas in Kızılay Square in Ankara.

The U.N. high commissioner drew specific attention to the use of these canisters by police forces in her statement on Jun. 18.

“Reports that tear gas canisters and pepper spray were fired at people from close range, or into closed spaces, and the alleged misuse of rubber bullets, need to be promptly, effectively, credibly and transparently investigated,” she stressed.

The Turkish Medical Association says many of the injured have reported respiration disorders caused by tear gas, and musculoskeletal system injuries (soft tissue injuries, cuts, burns and fractures), which are related with close-quarter shots of tear gas canisters and rubber bullets. They also reported tear gas being released into a clinic in Ankara.

“We started hearing a lot of calls around 2011 from places like Egypt, how there were canisters being used by police to injure people and suppress popular resistance movements.” Many of these canisters, she said, carried “Made in USA” labels.

“There are now reports coming out of Istanbul that canisters produced by NonLethal Technologies, based in Homer City, Pennsylvania and Defense Technologies based in Casper, Wyoming, have been found on the ground in Gezi Park,” Heinz added.

Facing Tear Gas has helped promote a petition, authored by American-Turkish lawyer Kerem Gulay, that calls on three U.S. congressmen to propose legislation that could stem the flow of tear gas to countries that are violently stifling peaceful protests.

The petition cites the fact that some 150,000 canisters were used across Turkey between May 28 and Jun. 16, and that in the same period 12,000 people received medical care for exposure to multiple forms of tear gas. The primary target of the petition, Senator P. Leahy from Vermont, was unavailable for comment.

While the U.S. represents a spigot that can be tightened to choke the supply of these products to Turkey, Bengi is unsure that such a call has resonated with the Turkish population yet.

“Right now people are still trying to shake off the shock of sustained use of tear gas. Their anger is entirely focused on the Turkish government,” she said.