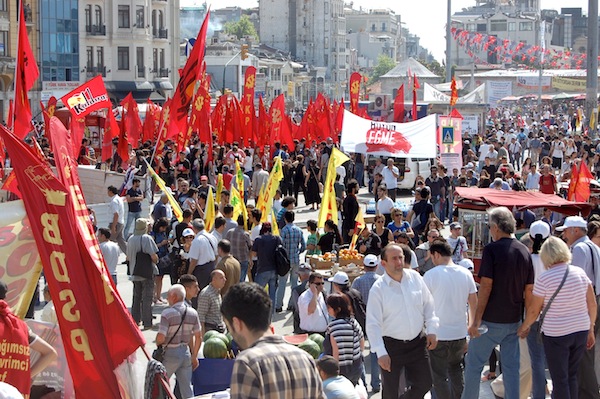 Protesters gather in Taksim Square in Istanbul, not far from Gezi Park, where protests were sparked last week against the government's most recent urban redevelopment project. Credit: Jillian Kestler-D'Amours

ISTANBUL, Jun 6 2013 (IPS) - Few imagined that the symbolic act of standing in front of bulldozers in Istanbul’s Gezi Park in an effort to block a development project near the city’s central square would have caused the reaction it did.

The defiant act – and the Turkish police’s violent response – pushed thousands of Turks out into streets across the country over the last week to decry their government’s increasingly authoritarian controls, lack of public accountability, police violence and numerous urban development projects that are irreversibly changing the face of the country.

For many, the plans to uproot trees in Gezi Park are just the latest in a long string of urban projects that ignore the cultural and historic heritage of Istanbul. More over, these projects are built at the expense of the poor and fail to consider residents’ input.

“The poorer people are being driven out of the centre of the city and pushed to the edges,” explained Kevin Robins, an Istanbul-based urban planning researcher. “On the other hand, [there is] the taking over of more and more inner-city areas for the young, affluent middle-class.”

“The mixture…of classes that existed in Istanbul is now being eroded quite dramatically,” Robins told IPS, describing the phenomenon as “polarisation”.

"The mixture...of classes that existed in Istanbul is now being eroded quite dramatically."
-- Kevin Robins

“There’s a general feeling that there’s an attack on the way of life,” he added.

According to a report last year in The Guardian, redevelopment projects are slated for some 50 neighbourhoods in Istanbul, and in 2012 alone, 7.5 billion Turkish liras were allocated to urban renewal across the city.

Last week, Recep Tayyip Erdogan, the Turkish prime minister and head of the ruling Justice and Development Party (AKP), unveiled his controversial plan to build a third bridge – a 1,275-metre suspension bridge, with an expected price tag of six billion dollars – across the Bosphorus, linking the European and Asian sides of Istanbul.

Opponents to the plan say the bridge will destroy some of the only remaining green areas in the city and have condemned the government’s lack of consultation with local community groups.

Erdogan has also pushed for building a shipping canal across the Bosphorus, calling it “a project of such immense size that it can’t be compared to the Panama or Suez canals”. In May, the government signed a contract to develop a third airport in Istanbul, with a capacity of 150 million passengers.

In recent years, residents of many Istanbul neighbourhoods, especially those home to impoverished, minority groups, like the Tarlabaşı or Sulukule areas, have also been pushed out to make way for real estate developers and luxury housing projects.

So-called gecekondu neighbourhoods – unlicensed shantytowns established decades ago by migrants from eastern Anatolia who moved to Istanbul for work opportunities – are particularly vulnerable to being displaced for the sake of development, with the government and its agencies not only confiscating land but also evicting and sometimes relocating residents to the city’s outskirts.

According to political scientist Mine Eder, the rapid pace at which the Turkish government has launched these urban redevelopment projects is what sets gentrification in Turkey apart from other developing countries around the world.

“There’s a deliberate demolishing to create more money, and really, to create this exclusionary zone for the rich. There is a whole re-appropriation, re-definition, and privatisation of the public space,” explained Eder, who teaches at Istanbul’s Boğaziçi University and specialises in the impact of gentrification on minority groups in Istanbul.

“[Erdogan’s] vision is driven by this sort of obsession with tourism and Istanbul becoming this big, giant, commercial centre,” Eder told IPS. “That vision is behind that unquestionable bulldozer construction. ‘Bulldozer neo-liberalism’ is a term that sort of encapsulates the whole thing.”

Nor is the government’s aggressive push for urban development projects limited to Istanbul.

On the road leading from the airport to Turkey’s capital city, Ankara, tall apartment blocks are being erected on numerous hilltops, construction cranes pepper the skyline, and huge billboards, sponsored by the government’s housing authority, TOKI, aim to entice potential homeowners.

By 2023, the 100th anniversary of the founding of the modern Turkish republic, Turkey hopes to be among the top ten economies of the world and reach a gross domestic product (GDP) of two trillion dollars and 500 billion dollars in exports annually.

According to Eder, the protests in Gezi Park signal a historic moment in the reign of the current AKP government, forming the strongest and most unified opposition movement in recent years to these unsustainable economic and urban development projects.

“Until now, there was absolutely no one who could actually sit, metaphorically, in front of that bulldozer, and say you can’t go in here,” she said. “Now, they’ve done it.”