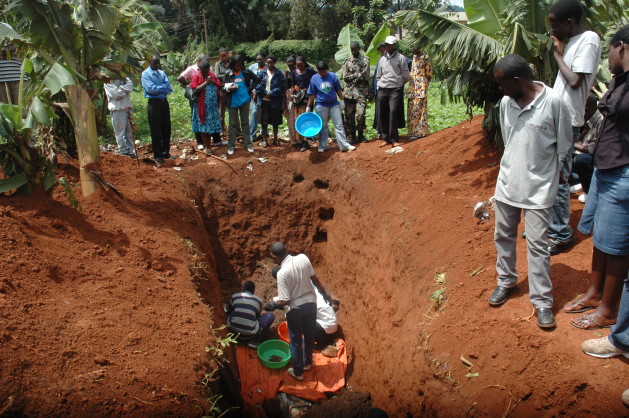 Rwandan genocide survivors exhuming the bodies of their relatives killed and buried in a mass grave during the 1994 100-day massacre. Credit: Edwin Musoni/IPS.

ARUSHA, Tanzania , Aug 27 2013 (IPS) - The International Criminal Tribunal for Rwanda (ICTR) based in Arusha, Tanzania, is due to conclude its business at the end of 2014 following several deferrals. A United Nations Security Council Resolution set up the tribunal in 1994.

Analysts have globally recognised the ICTR’s role in bringing perpetrators of the 1994 Rwandese genocide to justice. However, for a variety of reasons, they also believe that the tribunal has not entirely fulfilled its mandate.

With a year and a half left of its tenure, the ICTR has tried 75 people, sentenced 46 and acquitted 12. Of the 46 defendants who have been sentenced, 17 cases are still pending before the Appeals Chamber, although most of these appeals are at an advanced stage.

Human Rights Watch (HRW) has been a regular observer of the ICTR’s proceedings which started in 1997. Carina Tertsakian, a researcher in the Africa division of HRW commended “the important role” played by ICTR in bringing those accused of being most responsible for the genocide of Tutsis in Rwanda. According to her, the Rwandese justice system would not have been able to apprehend such senior leaders of the former regime.

According to the United Nations, the genocide claimed at least 800,000 lives particularly amongst the Tutsis.

But Tertsakian admits that the ICTR has had some weak areas. “We believe one of the main weaknesses of the ICTR is that it has not opened a single case for war crimes committed by members of the former rebel group, the Rwandan Patriotic Front (the RPF is now in power in Kigali) even though this was well within its mandate,” she told IPS.

In Kigali, genocide survivors have united under a group called Ibuka, which means ‘remember’ in Kinyarwanda. They give credit to the tribunal for sending a strong message to the architects of the genocide, particularly those still in hiding, but also express some disappointment.

“The ICTR worries them, which is a cause for celebration.  But it is not much if you consider the vast means at the tribunal’s disposal,” said Naphtal Ahishakiye, Ibuka’s executive secretary. He is dismayed that nine of the accused are still at large, including billionaire Félicien Kabuga who is often referred to as the principal funder of the genocide.

According to ICTR spokesperson Roland Amoussouga, the tribunal has cost 1.6 billion dollars as of  Dec. 31, 2011.

Ibuka has also denounced certain judgements. “In a number of cases, the tribunal acquitted defendants or handed down sentences that were too lenient, even where reliable evidence was put before it,” said Ahishakiye, who also believes that the ICTR “has contributed practically nothing to Rwandese reconciliation.”

The same criticism was made by the Rwandese government on Jun. 21 this year after a UN debate on international criminal justice. “The ICTR, particularly the Appeals Chamber has, on several occasions in the last months, acquitted a number of members of that cabinet, some of whom had been heavily sentenced at the first instance,” protested Rwandese diplomat Olivier Nduhungirehe.

ICTR officials have to date refused to comment on these “purely political” criticisms.

Those opposing the new regime in Kigali also have their grievances with the ICTR. The United Democratic Forces (UDF), a party created in exile and which is struggling to get registered in Rwanda, claims that the main failure of the Arusha tribunal is to have not sought the perpetrators of the Apr. 6, 1994 strike on the plane carrying then president Juvenal Habyarimana.

“The lack of will to try those responsible for the attack which triggered the genocide is for us a massive failure. It is clear that there was political pressure from some quarters,” said Jean-Baptiste Mberabahizi, spokesperson for the party exiled in Belgium. He denounces this as “the justice of the victor over the vanquished.”

According to French academic and Great Lakes specialist André Guichaoua, “assessments of the qualitative and quantitative achievements of the ICTR may be mixed, but the tribunal has paved a way forward.” He believes that “the prosecutor’s office, judges and their personnel tried the principal architects of the genocide, created jurisprudence and set standards in matters of justice and truth.”

Guichaoua, who was the expert witness in several of the ICTR cases recognises that the tribunal “gave priority to the pursuit and trial of the architects of the genocide” of Tutsis.

But, he pointed out to IPS, the lack of legal proceedings for crimes allegedly committed in 1994 by members of the former rebel forces now in power in Kigali “has undermined the credibility (of ICTR), the scope of its rulings, the unveiling of truth and the comprehension of facts.”

Guichaoua believes that successive prosecutors of the tribunal, with the consent of the UN Security Council, have all succumbed to Kigali’s stonewalling. For this reason he believes the ICTR’s mission has not been fully accomplished.