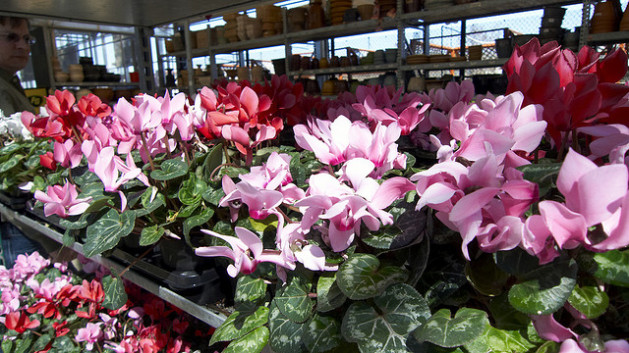 Cyclamens on sale at Home Depot. Credit: AWA/cc by 2.0

WASHINGTON, Aug 14 2013 (IPS) - Major U.S. retailers are selling garden plants that are billed as “bee-friendly” but laced with pesticides known to be toxic to bees, according to a preliminary study, the first on the issue, released Wednesday.

Researchers with Friends of the Earth U.S. and the Pesticide Research Institute say that more than half of the nursery plants studied contained residues of “neonicotinoid” pesticides, a substance increasingly thought to be contributing to mass die-offs of global honey bee populations.

"It turns out these systemics have major risks that EPA did not fully understand. Now the agency is in a defensive stance … It will be difficult to reel these products back in, but it can be done.” -- Peter Jenkins of the Centre for Food Safety

“At the levels observed in our report, the high percentage of contaminated plants and concentrations suggest this problem is widespread,” Lisa Archer, a co-author of the new report and director of Friends of the Earth U.S.’s food and technology programme, told IPS.

“Unfortunately, too many home gardeners have likely become a source of exposure to pesticides that have been shown to harm, weaken and kill bees. It’s pretty shocking that consumers who may be purchasing these plants specifically to help bees could in fact be poisoning them.”

Many others may share that shock. Also on Wednesday, these groups delivered a petition signed by some 175,000 people to major retailers, urging them to stop selling neonicotinoid-treated plants.

Following on a half-decade of mysteriously bad news, last winter was one of the worst on record for U.S. commercial bee populations, with beekeepers reporting mortality rates of 40 to 90 percent and the collapse of nearly a third of hives. Normal “over-wintering” mortality rates should be around 10 to 20 percent, experts say.

In the United States, around a third of the food supply (and two-thirds of food crops) is dependent on bee pollination. Broader ecosystems arguably have even more to lose, with some 80 percent of flowering plants relying on bees for their survival.

Neonicotinoids (or “neonics”) are known as a systemic pesticide, water-soluble substances that can travel throughout a crop via its roots, remaining within the plant for multiple seasons. Today, neonics make up the most common class of pesticide in the world, including treatments for nearly all commercially sown grains in the United States.

Yet a growing body of scientific evidence is suggesting that low levels of exposure to neonics could be making bee populations more vulnerable to a host of other problems, including parasites and a changing climate, or even simply making it through the winter months.

While scientists have increasingly focused on the potential impact of the agricultural use of neonics, Wednesday’s study is the first to try to gauge the use of these substances in home and industrial ornamental gardens. The report notes that “many of the seedlings and plants sold in nurseries and garden stores across the U.S. have been pre-treated with neonicotinoids at much higher doses than are used on farms.”

The study sample was very small, just 13 plants known to be highly appealing to pollinators, and the researchers are calling for more extensive research. The plants were purchased at three nationwide retailers in three areas of the United States and then analysed by an independent laboratory.

More than half the plants sampled were found with some level of neonic concentration, ranging from 11 to 1,500 microgrammes per kilogramme. Some plants were found to be carrying two or even three types of neonics.

While the lower levels of that spectrum would likely not kill bees, Archer notes that smaller amounts could have significant impact.

“Adverse effects are definitely possible even with lesser amounts, including impacting on bees’ fertility and ability to navigate, as has been proven in lab settings previously,” she says.

“Bees already have enough problems as it is, so our hope with this study is that retailers can now take action and lead on this issue, to ensure that consumers at least have access to neonic-free plants.”

Archer is unaware of the extent of knowledge within the nursery retail industry about the potential impact of neonics on bee populations, but says she’s willing to give companies the benefit of the doubt that they were unaware of the issue to date.

A spokesperson for Home Depot, a home services giant that operates some 2,250 stores, told IPS that his office hadn’t yet reviewed the new study. “But we certainly appreciate the importance of the bee population,” he said, “so we’ll be reaching out to the study groups to learn more.”

Lowe’s, another large-scale retailer included in the new study, did not respond to a request for comment by deadline.

Last month, U.S. lawmakers introduced national legislation aimed at taking emergency interim measures to safeguard U.S. beehives, after some 50,000 honey bees reportedly died following an ornamental application of neonic pesticide in a business parking lot. If passed, the bill would halt the use of neonics until the U.S. Environmental Protection Agency (EPA) – the body that approved their use in the first place – undertakes a scheduled reappraisal of the pesticides in 2018.

“Twelve years ago, EPA became so enamoured with systemic insecticides that they approved hundreds of these products,” Peter Jenkins, an attorney with the Centre for Food Safety, an advocacy group that sued the EPA over the issue this spring, told IPS.

“But it turns out these systemics have major risks that EPA did not fully understand. Now the agency is in a defensive stance … It will be difficult to reel these products back in, but it can be done.”

While some suggest that conservative pushback could doom the currently pending pollinator legislation, Jenkins points to recent evidence of notably broad bipartisan support for such action.

To a great extent, global precedent on neonic use is currently coming from Europe. The European Union is slated to pass a two-year moratorium on the use of three types of neonics, pending additional research, while the majority of home garden retailers in the United Kingdom have already stopped selling neonic-treated plants.

“If retailers can do this in the U.K., they can do it here,” Friends of the Earth U.S.’s Archer says. “According to the American Gardening Association, more than 80 percent of consumers are interested in purchasing environmentally friendly products, so we’re hoping retailers will see this as an opportunity to be leaders in pollinator protection.”