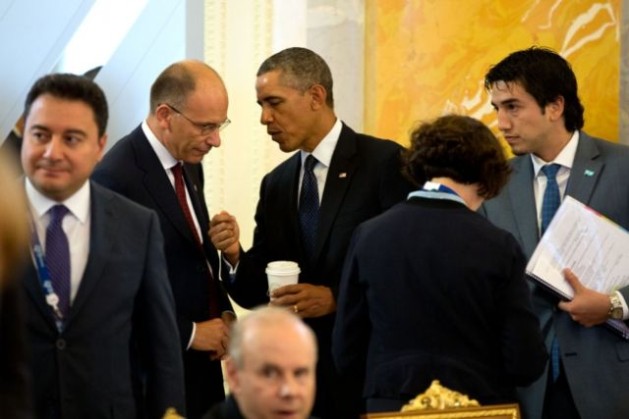 NEW YORK, Sep 19 2013 (IPS) - When U.S. President Barack Obama tried to drum up momentum for airstrikes in Syria to punish and deter the use of chemical weapons, he failed to gain much of a following.

At the G20 summit in St. Petersburg – which featured leaders from 20 of the world’s top economies – the U.S. proposed a statement to condemn Syria’s use of chemical weapons. But over half the other participants – from the BRICS (Brazil, Russia, India, China and South Africa), the European Union, Argentina, Indonesia, Mexico and Germany – chose not to sign.

"The Obama administration recognised its limits and was ready to change course rather than head into a very risky option of war.” -- James Paul

Domestically, a range of public opinion polls reflected U.S. citizens’ growing distaste for military interventions. The New York Times and CBS, for example, asked 1,011 people from Sept. 6-8 whether the U.S. should take the leading role in trying to solve international conflicts, and 62 percent of respondents said no.

Since World War II, the U.S. has been a “provider of last resort” in acting alone or with a coalition to address international problems, Kupchan told IPS. But now, the U.S. public is more focused on domestic issues and increasingly wary of intervening abroad.

“The U.S. simply doesn’t have the same sway that it used to,” said Kupchan, who cited a process in which power is slowly diffusing on a global scale. “In some ways, Syria is emblematic of these more long-term trends.”

The recent case over Syria was also interesting at grassroots levels. While Obama and British Prime Minister David Cameron pushed for intervention, public representatives in Congress and Parliament held them back.

“Not since the Vietnam War era had we seen such decisive influence from the grassroots over international policy,” said James Paul, former executive director of Global Policy Forum (GPF).

“Washington did not command the beliefs or the respect of world public opinion… Governments wanted to go along, but could not without losing their support. Even Gulf monarchs have to think about how the public will receive their policies,” Paul told IPS.

The idea that the U.S. is “failing” to lead unilaterally is a stigmatised one in U.S. society, whereas the U.S.’s main competitors have recently trumpeted ideas of diplomacy and multilateralism.

Chinese President Xi Jinping, for example, has been touting the phrase “win-win cooperation”, in which countries engage each other as partners, and Russian President Vladimir Putin criticised the notion of “American exceptionalism” in his recent New York Times op-ed.

“There are big countries and small countries… (but) we must not forget that God created us equal,” wrote Putin.

Russian Foreign Minister Sergey Lavrov took the initiative in brokering a diplomatic deal between the U.S. and Syrian President Bashar al-Assad – which forces Assad to turn over his chemical weapons arsenal to the international community at the expense of a U.S. military attack. But Obama took criticism at home for backing into such an agreement.

“Today, the U.S. has less leverage, less respect and less flexibility than it once had,” said Paul. “But we must see the Syria outcome not as a U.S. failure, but rather as a kind of success, in that the Obama administration recognised its limits and was ready to change course rather than head into a very risky option of war.”

Nonetheless, many U.S. officials are wary of Russia’s Putin, who granted the U.S. whistleblower Edward Snowden asylum in his country. Putin’s recently established anti-gay laws also cast him under a negative light in the West.

“There is a certain predisposition in the United States to look askance at partnerships with non-democracies,” said Kupchan of CFR. “That’s simply part of America’s ideological equipment.”

However, engaging diplomatically with Russia over Syria may improve bilateral relations and give new momentum for the U.S.-Russia “reset”. It may, for example, allow U.S. and Russia to renew negotiations for nuclear disarmament.

“But if this agreement stumbles, and it appears that Russia acted in bad faith, it will do more harm than good,” warned Kupchan.

Paul said that the U.S.-Russia deal finally puts the spotlight back on diplomacy at the U.N., paving a way for U.N. special envoy Lakhdar Brahimi to have another try in negotiating a political settlement to end Syria’s deadly civil war.

“When the great powers use the U.N., we can breathe a sigh of relief,” argued Paul. “Hopefully, the Syrian people can anticipate peace and political renewal. Western publics, by opposing war, have made this (opportunity) possible. “

On the heels of the G20 summit in Russia was another meeting in Bishkek, Kyrgyzstan, which gathered heads of state from the Shanghai Cooperation Organisation (SCO) – an assembly of former Soviet nations and China. SCO leaders have also pioneered new ideas for development and trade across Eastern Europe and Asia. When the U.S. applied for observer status to the SCO in 2006, its application was rejected.

The SCO reflects the increasing role of regional organisations and alliances to deal with international issues in a “multipolar” world. Such organisations include the European Union, the African Union, UNASUR, ASEAN and the Gulf Cooperation Council, among others

Asked if diplomacy or coercion will be the norm in a “multipolar” world, Kupchan said, “I think it could go either way. You could say that in a world in which there are multiple centres of power, those centres of power can address global challenges only through multilateral cooperation. As a consequence, you can expect more of it.

“An alternative view would be: in a world in which there is a diffusion of power, there will be more competition for primacy and status, and as a consequence, you will see less multilateralism and more geopolitical rivalry.

“But I’m enough of a realist to say that the default position will be growing rivalry, and only through really good policy and steady efforts will we tame that rivalry through multilateral cooperation,” argued Kupchan.