UNITED NATIONS, Sep 4 2013 (IPS) - The United States, which is preparing to launch a military strike on Syria, is being cautioned by several former world leaders and Nobel Peace laureates to seek a political solution to the ongoing crisis – and forego armed intervention in the beleaguered Middle Eastern nation. 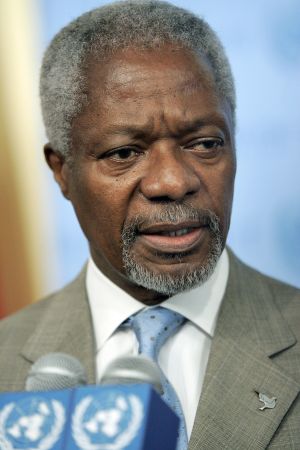 Former U.N. secretary-general Kofi Annan argues that there is “no military solution” to the crisis in Syria. Credit: UN Photo/Paulo Filgueiras

Former U.N. Secretary-General Kofi Annan, who described the 2003 U.S. invasion of Iraq as “illegal” and a violation of the U.N. charter, unequivocally declared Wednesday there is no military solution to the crisis in Syria.

Six Nobel Peace laureates, speaking on behalf of the Nobel Women’s Initiative (NWI), called upon the United States and its allies to use the international legal system, primarily the International Criminal Court (ICC), to respond to the use of chemical weapons in Syria.

At the same time, the Brussels-based International Crisis Group (ICG) said if the United States goes ahead with the military attack, it will have taken such action for reasons largely divorced from the interests of the Syrian people.

“The administration has cited the need to punish, deter and prevent use of chemical weapons – a defensible goal, though Syrians have suffered from far deadlier mass atrocities during the course of the conflict without this prompting much collective action in their defence,” said ICG.

Even as the administration of U.S. President Barack Obama has decided to bypass the Security Council, Annan said the 15-member U.N. body has “a moral responsibility to find common ground, putting the well-being of the Syrian people at the forefront of its decisions.”

This is the only way, he said, to end the violence and achieve a peaceful settlement based on an inclusive political process.

But the Security Council remains deadlocked, with Russia and China threatening to veto any resolution endorsing military action against Syria.

Speaking on behalf of the 11-member group called ‘The Elders’, Annan said: “We urge all member states to await the report of the U.N. inspectors on the use of chemical weapons in Syria and the deliberations of the Security Council before drawing conclusions and deciding on the course of action.”

In a statement released Wednesday, Annan said the Elders are appalled by the use of chemical weapons against civilians in Syria.

“We strongly condemn the use of such weapons as inhumane and criminal. Those responsible must be held accountable both individually and collectively,” the statement read.

The group says U.N. inspectors should determine the facts and the United States should await their report to Secretary-General Ban Ki-moon. There is no timeline for the release of the report, which focuses primarily on the chemical arms attack in Syria on Aug. 21.

The United States says it has evidence to prove that Syrian security forces were responsible for the attack but President Bashar al-Assad has accused rebel forces of using weapons of mass destruction (WMDs).

The Syrian conflict has raged for two and a half years with over 100,000 people killed, many thousands injured, two million refugees and over four million people internally displaced within Syria.

“There is no military solution to this conflict. Therefore every effort must be made to stop further bloodshed and to re-energise the political process to put an end to the conflict that has devastated and brutalised Syria,” Annan said.

“We hope that U.S. legislators, like their British counterparts, will recognize that there is no public appetite to resolve this problem through more bombs and more violence,” said Jody Williams, who won the Nobel Peace prize in 1997 for her work against the use of anti-personnel landmines.

“Americans know that any intervention, far from being a strategic move, will only lead to more loss of lives and even possibly to retaliation against Americans,” she added.

Last week, British Prime Minister David Cameron lost a vote – on military intervention in Syria – in the House of Commons.

The laureates say the use of chemical weapons is a “war crime that should be addressed by the international legal system created precisely for such events”.