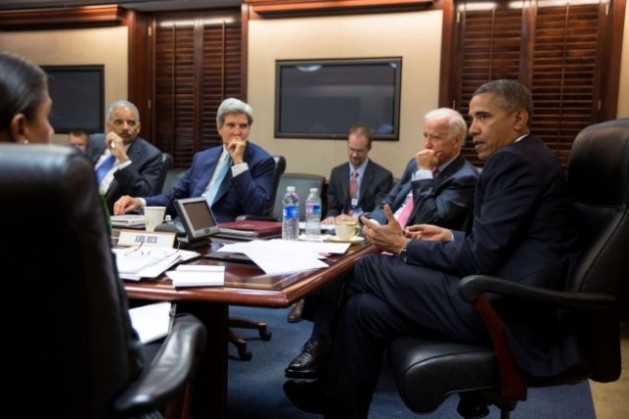 WASHINGTON, Sep 4 2013 (IPS) - In an important boost for President Barack Obama, two key Republicans and the Israel’s lobby’s two most influential groups Tuesday announced their support for a proposed Congressional resolution authorising limited military strikes against Syria for its alleged use of chemical weapons.

“I believe that my colleagues should support this call for action,” said Rep. John Boehner, the Republican speaker of the House of Representatives, after emerging from a White House meeting with Obama. The Republican majority leader, Eric Cantor, who also took part in the meeting, echoed his endorsement.

Several hours later, the American Israel Public Affairs Committee (AIPAC), which advertises itself as “the most influential foreign policy lobbying organisation on Capitol Hill”, came out with its own endorsement, implicitly linking military action to past pledges by Obama to prevent Iran from obtaining a nuclear weapons, by military means if necessary.

“This is a critical moment when America must …send a message of resolve to Iran and Hezbollah – both of whom have provided direct and extensive military support to [Syrian President Bashar Al-] Assad. The Syrian regime and its Iranian ally have repeatedly demonstrated that they will not respect civilized norms,” the group said.

“That is why America must act, and why we must prevent further proliferation of unconventional weapons in this region,” it added.

A key Jewish group, the Conference of Presidents of Major American Jewish Organisations, also came out in favour of military action based on much the same argument.

Referring to the Assad regime’s alleged use of chemical weapons against an opposition stronghold outside Damascus that the administration has said killed more than 1,400 people, the group declared, “Those who perpetuate such acts of wanton murder must know that they can not do with impunity.

“Those who possess or seek weapons of mass destruction, particularly Iran and Hezbollah, must see that there is accountability,” according to the Conference. “Failing to take action would damage the credibility of the U.S. and negative impact the effort to prevent Iran from achieving a nuclear weapons capacity.”

The endorsements came on the second day of what some administration officials called a “full-court press” to persuade lawmakers to back the resolution when Congress officially returns from its August recess next week. They do not guarantee its passage, but are seen as key milestones along the way.

They marked the latest developments following Obama’s surprise decision this past weekend to seek authorisation to carry out limited strikes against Syria – an action which most observers had expected would have taken place by now – from Congress.

That decision was bitterly denounced by neo-conservatives and other hawks, such as Republican Sens. John McCain and Lindsay Graham, as an abdication of leadership and the latest in what they regard as a disastrous series of moves by Obama to extricate the U.S. from the Middle East.

It followed the unexpected defeat in the British House of Commons last Thursday of a preliminary motion by Prime Minister David Cameron to authorise military action against Syria.

The vote, which effectively deprived Washington of its most loyal military ally, stunned the administration. With many lawmakers from both sides of the aisle here also pressing for a vote, Obama, who had seemed increasingly determined in the preceding days to carry out cruise-missile strikes from warships in the eastern Mediterranean as early as last weekend, apparently decided to yield to their demands.

Still, the White House has said Obama retains the authority as commander-in-chief to go ahead without Congress’ approval.

Obama announced his decision in a televised address Saturday and subsequently submitted a draft Authorisation to Use Military Force (AUMF) which will serve as the basis for the Congressional debate.

If approved in its present form, it would give Obama the authority to use the military “as he determines to be necessary and appropriate in connection with the use of chemical weapons or other weapons of mass destruction in the conflict in Syria” in order to “prevent or deter” their “use or proliferation” and “protect the United States and its allies and partners against the threat posed by such weapons.”

Hawks, the most visible of whom have been McCain and Graham, initially said they could not support the resolution because it was too limited in purpose and did not appear to be “part of an overall strategy that can change the momentum on the battlefield, achieve the President’s stated goal of Assad’s removal from power, and bring an end to this conflict.”

After meeting with Obama at the White House Monday, however, the two men came out in support of the resolution both because, in McCain’s words, a no vote would be “catastrophic” for Washington’s international credibility and because of their understanding that the president was committed to “very serious’ strikes against Syria beyond the “shot across the bow” that he had spoken of earlier in the week.

In addition, they suggested that Obama had assured them that Washington will step up military aid to Syrian rebels, something which he has long been reluctant to do.

But appeasing the hawks may make it more difficult to overcome the concerns of the anti-war faction in his own party, as well as the embryonic coalition of libertarians, neo-isolationists, and fiscal conservatives among Republicans, especially in the House of Representatives whose members are traditionally more sceptical of foreign entanglements than the Senate where Obama should have an easier ride.

While the top two House Democrats have endorsed the proposed resolution, others have said they will support it only if it is drawn more narrowly, such as explicitly excluding the use of ground troops and setting limits on its duration in time and its geographical scope to within Syria’s borders. Of course, if Obama agrees to such limits, he risks losing support from the hawks.

As for the Republicans, Boehner and Cantor are considered relatively weak leaders who have repeatedly failed to keep their caucus in line on many issues. Newer members, many of whom associate themselves with the “Tea Party” movement and are reflexively anti-Obama, been particularly unruly.

Moreover, with public opinion among both Democrats and Republicans – although Republicans are somewhat more evenly split – running against military action, Obama could face a difficult climb in getting the House behind him. A Pew Research Centre poll conducted over the weekend found 48 percent of respondents opposed to airstrikes on Syria, while 29 percent approved.

Still, active lobbying by AIPAC and the Israel lobby which, until Tuesday, had publicly maintained a discreet silence about how Washington should react to the alleged chemical attacks, could prove decisive to the outcome in Congress.

The New York Times this weekend called AIPAC “the 800-pound gorilla in the room” whose unquestioned influence was needed by the administration to prevail. (Significantly, the Times omitted the quote in updated online versions of the story.)

While the group argued in a reference to the alleged chemical-weapons attack that “barbarism on a mass scale must not be given a free pass,” it suggested that Iran and its nuclear programme – which successive Israeli governments have denounced as the number one threat – loomed as large or larger in considering how to respond.