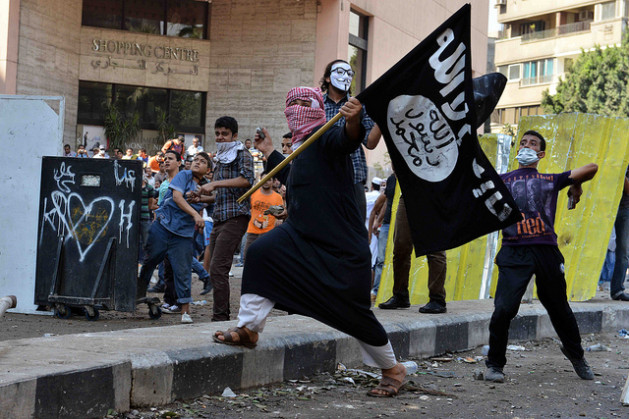 As more MB leaders are detained and as communications between the leadership and rank and file are interrupted, younger and perhaps more radical members of the MB will hit the streets. Credit: Hisham Allam/IPS

WASHINGTON, Dec 27 2013 (IPS) - For the first time in its 85-year history, the Egyptian Muslim Brotherhood Wednesday was declared a terrorist organisation. The provisional government’s decision, presumably with the military junta’s approval, came after two deadly bombings in Mansura and Cairo.

The government offered no proof of the MB’s involvement in the bombings; in fact, a radical group by the name of Ansar Bayt al-Maqdis (Defenders of the Holy Mosque) claimed responsibility for the attacks. The MB denounced all violent acts, especially against security officers.

The MB is not just a political organisation, as these hardliners maintain. It’s the most visible and credible face of civic Islam in the country.

The government’s action against the MB will have far-reaching implications, both short-term and long-term, for Egypt and ultimately for the U.S. Declaring the MB a terrorist organisation is a short-term victory for the hard-liners within the junta and the provisional civilian government who have vowed to crush the MB. But it is a Pyrrhic victory because since the 1940s, every Egyptian government that clashed with the MB failed to crush it.

The MB is not just a political organisation, as these hardliners maintain. It is a social, religious, educational, healthcare, and cultural movement. It’s the most visible and credible face of civic Islam in the country. It is also the largest and most-disciplined Islamic political society in the Arab and Sunni Islamic world.

The MB has penetrated Egyptian society, especially in the lower middle class and poorer neighbourhoods, through a myriad of non-governmental organisations. These groups provide food, healthcare, childcare, and education for free or at affordable costs. Furthermore, millions of middle class, professional Egyptians benefit from the medical services of MB-run hospitals and clinics.

When compared with expensive private hospitals or low-quality government hospitals, MB health facilities offer the only appealing alternative available to most Egyptians.

The government’s short-sighted decision branding the MB a terrorist organisation will force all these services to stop, leaving millions of Egyptians without health, education, and welfare services. These abrupt hardships would push people to the streets, creating a new wave of unrest, violence, and instability.

The military junta is blindly lashing out against the MB because it has failed to quell the daily demonstrations against its deepening dictatorship. The recent convictions and imprisonment of three Tahrir Square secular icons is another sign of the military’s visceral and ruthless intolerance of all voices of opposition, secular or Islamist.

The government’s action is not expected to stop public demonstrations against the military despite the rising wave of arrests of MB members and sympathisers. As more MB leaders are detained and as communications between the leadership and rank and file are interrupted, younger and perhaps more radical members of the MB will hit the streets. Egypt will experience a heightened level of chaos and insecurity.

Chances for an inclusive political settlement are rapidly diminishing. The military junta would be foolish to think they could devise a stable political system without including the MB. Political Islam is an organic component of Egyptian politics dating back to 1928 when the MB was founded.

General Sisi might ride the wave of anti-MB hysteria all the way to the presidency, but riding the tiger is a risky proposition, as the modern history of Egypt has shown. He should learn from the military dictators who preceded him as presidents that repressing the MB and jailing and executing its leaders have failed to make it go away. The wave of violence that is expected to follow the junta’s decision would ultimately force the government to reconsider its decision.

Declaring the MB a terrorist organisation will also have serious negative implications for the United States. Hard-line supporters of the military will likely accuse the U.S. of coddling the MB, and MB supporters would turn against the U.S. for its perceived support of the military. U.S. personnel and facilities in Egypt will be targeted by regime thugs and by potential terrorists.

The U.S. State Department’s mild rebuke of the junta’s action – voicing its support for “an inclusive political process” and calling for “dialogue and political participation across the political spectrum” – will fail to satisfy either the military or the MB. Washington should make it clear to the junta that political stability in Egypt cannot be achieved by excluding the MB and its affiliates from the political process.

In fact, Washington has been engaging the MB since the early 1990s when the organisation decided to shun violence and participate in Egyptian politics through elections despite frequent objections from the Mubarak regime. The U.S. should continue to do so regardless of the junta’s ill-advised decision.