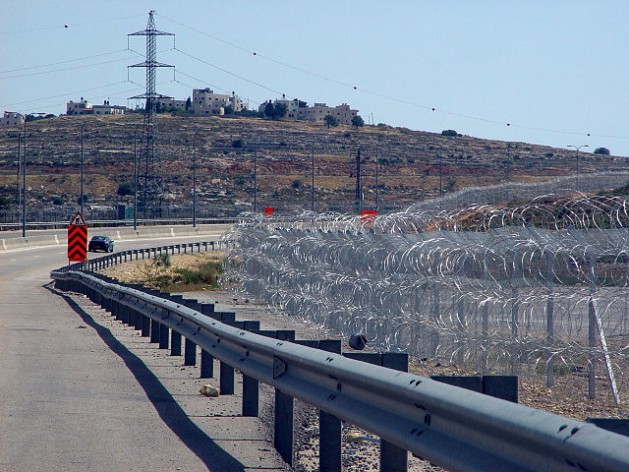 A stretch of Route 443 near the Giv'at Ze'ev intersection. Barbed wire fencing forms a section of the Israeli barrier on the West Bank. Credit: Etan J. Tal CC BY 3.0

ROUTE 443, Occupied West Bank, Dec 29 2013 (IPS) - The full moon sets; another dawn rises over Route 443. For over 40,000 Israeli residents and settlers commuting daily between Jerusalem and the Tel Aviv metropolitan area, it isn’t yet rush hour.

For hundreds of Palestinian construction workers who reside along 443, it already is. To get to construction sites inside Israel, they rise in the dead of night.

Route 443 is one of Israel’s major traffic routes. About 15 kilometres of the 28-kilometre trunk road meanders through the occupied West Bank, including four kilometres on the outskirts of occupied East Jerusalem.

In a landmark ruling four years ago, Israel’s Supreme Court annulled a military order which, for eight years, had completely barred Palestinians from travelling on 443.

Route 443 is the story of the 46-year occupation of Palestine writ on forbidding signposts.

“We still can’t use 443,” rants Seif al Jamal from Beit Surik, a Palestinian village not far from the Modi’in checkpoint to Israel. “We wake up at 3:30 am instead of at 6 am.”

To enter Israel, entrepreneur Muhammad Farraj must pass through a checkpoint which blocks the access road linking his nearby village of Beit Sira to 443, drive on 443 a few metres, park by the roadside, and cross the Modi’in checkpoint on foot.

Such are the vicissitudes of Israel’s military rule. A simple 20-minute drive becomes a two-hour journey. For Route 443 is the story of the 46-year occupation of Palestine writ on forbidding signposts.

Signposts sometimes are incongruous. “It’s strictly prohibited to cross the road other than at a clearly marked Palestinian crossing,” reads one.

But there’s no crosswalk on 443’s four lanes, and traffic is at full speed. So the labourers literally run for their lives to reach the checkpoint.

In theory, Palestinians can drive along 443. In practice, it’s an exasperating experience. One can spend a whole day crisscrossing 443 without spotting a single Palestinian licence plate.

Route 443 was built in the 1980s for Israeli drivers seeking to escape the regular morning and evening traffic jams plaguing Highway 1, the Jerusalem-Tel Aviv thoroughfare.

At the time, residents from the 22 adjacent Palestinian villages joined forces with the Association for Civil Rights in Israel (ACRI) and petitioned the Supreme Court against confiscation of land for the purpose of laying out 443.

The petition was rejected on the grounds that Route 443 was meant to also serve the 35,000 Palestinians who live alongside it.

During the Oslo process (1990s), as the road to peace seemed assured, Palestinians used 443 to commute to the administrative and economic centre of Ramallah.

But in 2000, the Intifadah uprising erupted. Within two years, seven Israelis were killed in Palestinian attacks on Route 443. Scores were wounded.

As a result of deteriorating security conditions, the Israeli military authorities in the area closed 443 to Palestinian traffic.

Following the promulgation of the military order, Palestinian villagers and ACRI submitted a new petition to the Supreme Court challenging the legality of the sweeping travel ban, arguing that the collective punishment contradicted not only international humanitarian and human rights laws, but also the Court’s own previous judgment.

When the Court revoked the ban, the ruling stressed that the ban was “unauthorised and disproportional”, and that “freedom of movement constitutes a basic liberty, and it is a duty to undertake all necessary measures in order to preserve it in territory held by Israel.”

Yet at one fell swoop, the Court ordered the Israeli Defence Forces to find “another means” of ensuring the security of Israelis.

“The military commander in the area decided on such restrictive security arrangements that, in effect, Palestinians must mount at one point, and disembark very close by,” says Tamar Feldman from ACRI. “Besides, the passageway to Ramallah is closed.”

The military authorities did comply with the verdict, but the same security measures which were enforced during the Intifadah are still in place, Feldman stresses.

“The verdict was celebrated as a human rights achievement, yet legitimises the military’s own discretion powers while giving a sense of justice.”

Nothing’s changed. While driving up and down 443 though the Judean Hills, it’s hard to escape the sensation of being trapped along a frontline – sometimes on both sides of the road.

A web of electronic fences, watch towers and walls of concrete slabs – parts of which merge into Israel’s ‘Security Wall’ – insulates the driver from potential sniper attacks, concealing minarets of mosques, as if 443 itself ran inside Israel, not within the swath of land which Palestinians envision as part of their future state.

Painted murals confer on the driver the illusion of a wall with a view.

Israelis are warned not to enter Palestinian villages. And if by mistake they do, a signpost reads ominously, ‘Israeli, beware, if you reached that point, you erred!’

Access roads to 443 from the villages are shut down with fences, metal gates, dirt barriers, roadblocks and blockers.

Palestinians are directed to alternative routes underneath 443, some of which are paved especially by Israel.

Most Israeli motorists justify the de facto ban and separate road system – “in case some lunatic shoots at us,” many charge.

“Layers of legislation, policies and practices have created a system of segregation and separation which discriminates the Palestinian population,” says Feldman.

Driving along 443 also allows the traveller to reflect on how the lay of the land has shaped the conflict. Perennial fixtures of the Israeli occupation pass before the eyes, be they the Bet Horon settlement or the Ofer military prison in which hundreds of Palestinians are detained.

Occasionally, it’s the weather that’s the real master of the land. When earlier this month a snowstorm hit the area, both Palestinians and Israelis were barred from driving along 443.

Some Israeli motorists felt so secure that they insouciantly stopped on the roadside to revel in the first snow, within striking distance from the incarceration facility.