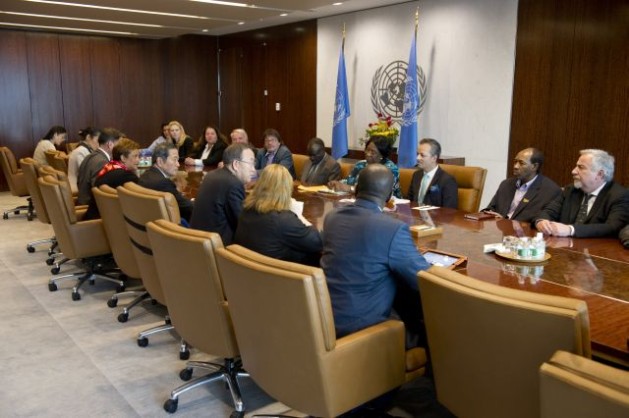 UNITED NATIONS, Dec 7 2013 (IPS) - The United Nations will commemorate Human Rights Day next week amidst charges the world body is unilaterally proposing drastic changes to working conditions and salaries of staffers without due consultation – and in violation of their basic rights.

The Geneva U.N. Staff Union is protesting “the withdrawal of the right to union recognition by Secretary-General Ban Ki-moon and his refusal to honour negotiating rights for elected representatives of his employees.”

Meanwhile, the United States has proposed an eight-percent pay cut while the UK, on behalf of the largest contributing countries, has asked the secretary-general to further slash costs.

All this, he said, “is taking place at a time when staff are unable to negotiate on their conditions of work.”

The staff unions of the United Nations have deployed a number of colleagues to New York in order to put their views to the 193 member states and reverse the trend, Richards added.

According to the latest U.N. figures, there are more than 44,000 staffers in the U.N. system, of which over 60 percent are in field locations overseas.

Asked for her comments, Barbara Tavora-Jainchill, president of the U.N. Staff Union in New York, told IPS, “We are absolutely with Geneva on this.”

“U.N. workers are also human beings and should be granted the same rights [as all others]”, she said, even as the United Nations plans to celebrate Human Rights Day on Dec. 10.

The irony of the commemoration is that those participating in an “unofficial event” protesting the violation of rights will include the staff of the Office of the U.N. High Commissioner for Human Rights in Geneva.

On specific union-related matters, Tavora-Jainchill said, “We believe the U.N. can only effectively promote the defence of human rights all over the world if the rights of staff members are effectively protected.”

She recalled that as far back as Nov. 17, 1947, the General Assembly approved resolution 128 (II), titled “Trade Union Rights (Freedom of Association)”, which endorses the principles proclaimed by the International Labour Conference in respect of trade union rights.

That resolution, she said, also includes a sub-section which reads “the effective recognition of the right of collective bargaining… for all human beings irrespective of race, creed or sex.”

On Jun. 14, 2013, Ban and his management team walked out of talks with U.N. staff unions, removing their right to negotiate with management, according to Richards.

“This has left both sides unable to work together to improve conditions of service at a time when U.N. staff are increasingly becoming targets,” he said.

Asked for comment, the United Nations did not respond by press time to staff union charges.

In the last 10 years, 555 staff members have been attacked, with over 200 killed, mostly while serving in various overseas U.N. missions.

After protests from staff unions about the withdrawal of recognition, Ban has set up a working group to discuss a future framework for staff relations.

Human Rights Day has been chosen as a day of protest “in order to mark the fact that while U.N. staff are required to advocate human rights to the rest of the world, the same rights are lacking within the organisation”.