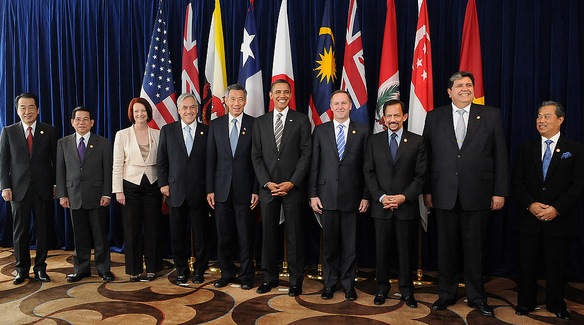 Members of the Trans-Pacific Partnership in 2010. Credit: Gobierno de Chile/CC by 2.0

WASHINGTON, Dec 10 2013 (IPS) - Internal government documents leaked Monday offer a sombre picture of ongoing negotiations towards a major free-trade area covering much of the Pacific Rim. The area is a key objective for the administration of President Barack Obama but has been harshly criticised by a broad spectrum of global civil society.

While U.S. trade officials have insisted on December as a deadline for agreement on the 12-member Trans-Pacific Partnership (TPP), a new briefing written by one of those 12 governments suggests that negotiators remain far apart on several notable policy areas. The picture that emerges is one of an intransigent U.S. Trade Representative (USTR) being increasingly isolated in the negotiations.

“[T]he U.S. is exerting great pressure to close as many issues as possible … However the Chapters that were reviewed by the [chief negotiators] did not record much progress,” the memo, reportedly written within the past two weeks by one of the governments party to the TPP negotiations and published on Monday by WikiLeaks, stated.

The U.S. chief negotiator “met with all 12 countries and said that they were not progressing according to plan. One country remarked that up until now there had not been any perceivable substantial movement on the part of the U.S., and that is the reason for this situation.”

TPP negotiators are currently in Singapore for what has been widely seen as a closing round of talks towards the TPP, which has been seriously debated for almost four years.

The narrative of looming success received additional momentum following Saturday’s small but significant agreement under the World Trade Organisation (WTO), the global body’s first accord since its creation in 1995. Following that success, seen as an important fillip for multilateral trade mechanisms, ministers from the TPP countries flew straight to Singapore, where they’re holding talks through Tuesday.

“The latest leaks reveal the USTR continues to bully Asian countries into accepting some of the worst corporate expansions in any international agreement,” Arthur Stamoulis, executive director of the Citizens Trade Campaign, an advocacy group here, told IPS.

“It’s good to see that many countries are continuing to resist these provisions, but it’s discouraging to see the U.S. going to the mat so strongly for this corporate power rush. It will be interesting to see whether they do the same for labour rights, human rights and the environment.”

The memo’s authenticity has not been substantiated, nor is it known which government’s views it may reflect. A spokesperson for the USTR on Monday told the media that some elements of the document are “outdated” or “totally inaccurate.”

Either way, the document’s substance depicts a pessimistic narrative and calls the possibility of meeting an end-December deadline “very difficult” to imagine.

“This leak guts the sense of inevitability about TPP that the negotiators have been so relentlessly building,” Lori Wallach, director of Public Citizen’s Global Trade Watch, a consumer watchdog group, said Monday. “It shows, thankfully, how far from agreement the countries are and it puts people in all of the involved countries on notice about just how dangerous this deal would be for them.”

The TPP negotiations process has been pilloried by civil society due to its secrecy, with much of the public’s knowledge of the substance of the talks coming from leaks such as Monday’s.

On the other hand, some of the world’s largest multinational companies have reportedly been given prime access to the discussions, and critics have warned that corporate interests have had an irrevocable impact on the broad sweep of the TPP’s evolving outline. The U.S. Chamber of Commerce, the country’s largest business lobby group, has wholeheartedly embraced the TPP’s opportunity, stating it would “pay huge dividends for the United States.”

But supporters and opponents alike agree that the stakes are high. If eventually signed, the TPP would provide a blueprint for U.S. trade arrangements for the foreseeable future, and as an open-ended agreement, it could also expand as required.

Still, the new leaked memo outlines dozens of outstanding disagreements, many substantive and most involving the United States, in at least 15 broad chapters. On several important issues, such as environmental and labour safeguards, it appears that the discussion has barely even begun.

One of the most controversial issues appears to be a strong push by the United States to require the creation of an independent mediation mechanism for disputes between investors and states. Such “investor-state tribunals” have been a regular part of bilateral U.S. trade deals since the 1990s, particularly in Latin America, and allow foreign investors to sue governments outside of the national legal system for policies seen as impinging on profits.

U.S. negotiators are now seen as pushing an even more stringent tribunal proposal and refusing to back down in the face of opposition. The memo noted that this is “the most important issue for the majority of members” but complained that the United States “has shown no flexibility on its proposal, being one of the most significant barriers to closing the [investment-related] chapter.”

Reportedly, the tribunal proposal is being supported only by the United States and Japan, with the rest objecting to the fact that the provision would apply to “nearly all significant contracts that can be made between a State and a foreign investor.”

“Apparently this proposal would go beyond existing pacts in terms of the powers given to corporations, which would apply to contracting in mining, oil exports, public works and more,” Citizen Trade’s Stamoulis said. “The fact that all TPP countries except Japan appear to be resisting USTR’s worst pushes on investor-state disputes is encouraging, but the document suggests the United States is being completely inflexible – to the point of threatening the agreement.”

Still, it is unclear whether deadlock over the investor-state tribunal issue could actually scupper the broader TPP talks in which the Obama administration is deeply invested.

“Other countries are still holding strong, but it’s an open question how long they will be able to hold out as negotiations shift into the political realm,” Stamoulis said. “At the same time, it’s clear who’s behind the [U.S.] agenda: these large corporate interests. If they don’t get their way, they might take their ball and go home.”