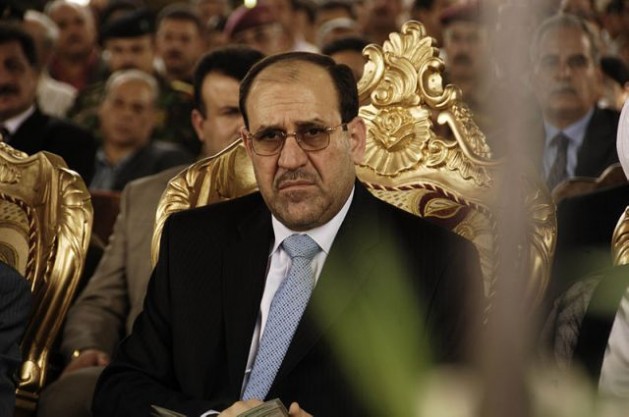 Prime Minister Nouri Al-Maliki has been pressing for Apache attack helicopters, as well as F-16 warplanes, since before the U.S. withdrawal in 2011. Credit: US Govt/public domain

WASHINGTON, Jan 9 2014 (IPS) - Two years after the last U.S. combat soldiers left Iraq, the past week’s takeover of the western city of Fallujah by the Al-Qaeda-linked Islamic State of Iraq and Syria (ISIS) has refocused Washington’s attention on a country that it had hoped to put permanently in its rear-view mirror.

The administration of U.S. President Barack Obama, which has ruled out any direct military intervention, has rushed Hellfire missiles and other military equipment to the Iraqi army, which has reportedly surrounded the city, the second-largest in the Sunni-dominated western Al-Anbar province and the centre of the Sunni insurgency against the eight-year U.S. occupation.

"We are not contemplating putting boots on the ground. This is their fight, but we’re going to help them in their fight." -- Secretary of State John Kerry

It is also pressing at least one key lawmaker, Senate Foreign Relations Committee chair Robert Menendez, to release his hold on the delivery of a fleet of Apache attack helicopters sought by Prime Minister Nouri Al-Maliki. The Iraqi leader, who heads a Shia coalition, has been pressing for the helicopters, as well as F-16 warplanes, since before the U.S. withdrawal in 2011, most recently during a visit to Washington in November.

But some critics of both Maliki and the Obama administration are urging Washington to condition additional assistance on the Iraqi leader’s firm commitment to show greater flexibility toward demands by the country’s Sunni minority.

“It is important to kill and capture al-Qaeda militants, to be sure, but absent political reconciliation with the Sunni population, AQI (Al Qaeda in Iraq) will have no trouble regenerating its losses,” wrote Max Boot, a military analyst at the Council on Foreign Relations (CFR) who strongly opposed Obama’s decision to withdraw troops from Iraq after its parliament declined to offer U.S. soldiers legal immunity for their actions there.

“Indeed the indiscriminate application of firepower by Maliki, while it may play well among the prime minister’s Shiite constituents …, is likely to simply arouse more Sunni opposition,” he wrote on the neo-conservative ‘Commentary’ blog Wednesday.

But others analysts here disagree, insisting that ISIS must be defeated, hopefully with the help of local militias aligned with the Iraqi army, and that blaming Maliki for the current situation “confuses cause and effect.”

“The fundamental problem is that significant numbers of Anbaris have not yet reconciled themselves to the loss of power – and the privileges that came with it – after the fall of Saddam Hussein,” according to Douglas Ollivant of the New America Foundation (NAF) and a key adviser of Gen. David Petraeus during the 2007-08 U.S. “surge” of troops into Al-Anbar and Baghdad that reduced the sectarian killing that brought Iraq to the brink of all-out civil war by 2006.

“This has spawned two results: demonstrations to express demands that are politically impossible outside an authoritarian system and a return to the violence that Al Qaeda has been trying for years to precipitate,” Ollivant wrote on the foreignpolicy.com website.

There were some reports late Wednesday that ISIS was withdrawing its forces from Fallujah under pressure from local leaders who fear precisely the kind of destruction that befell the city during a bloody siege by U.S. forces in 2004. However, the fact that the group was able to gain control over it — as well as parts of the province’s capital, Ramadi, for a brief period late last week – has underscored the threat of civil war similar to that which has wracked Syria over the past nearly three years.

Indeed, ISIS, which, until this week when it came under attack by other rebel factions, had emerged as the dominant insurgent force in neighbouring Syria, has declared its intention to establish a trans-national emirate as part of a larger goal of expelling the influence of Shia-led Iran of which Maliki – as well as Syrian President Bashar Assad and Lebanon’s Hezbollah — is seen as a mere puppet.

Obama himself has made clear that, in his words, he wants to avoid “taking sides in a religious war between Shia and Sunni,” whether in Syria or elsewhere in the region.

That was echoed with regard to Iraq by Secretary of State John Kerry last weekend in Jerusalem. “This is a fight that belongs to the Iraqis,” he stressed repeatedly during a news conference, although he also noted that Washington would do “everything possible” to help Baghdad defeat ISIS which he called “the most dangerous players” in the region.

In addition to Hellfire missiles, which are currently attached by Iraq’s small air force to light fixed-wing aircraft, Washington has promised to speed the delivery of surveillance drones which may require U.S. training of Iraqi personnel, either in the U.S. or in Iraq.

Some officials have reportedly urged the administration to offer armed drones on the condition that they are operated by the Central Intelligence Agency (CIA), as they have been in Pakistan and Yemen. But Maliki is considered unlikely to agree to such a condition.

Most analysts agree that the Apache helicopters, dozens of which Baghdad has placed on order, would be particularly effective against suspected ISIS units in the open desert in Al-Anbar.

Delivery, however, has been held up by some lawmakers who have expressed concern that they could be used against the legitimate political opposition. Iraqi forces have used lethal force several times against initially peaceful protests, and U.S.-trained counter-terrorist units have also been accused by human rights monitors of serious abuses, including arbitrary arrests and even assassinations, against prominent Sunni leaders and activists over the past year.

The administration has also deplored what is seen as Maliki’s increasingly sectarian agenda and pressed the Iraqi leader to take a more conciliatory stand toward the Sunni community, especially in Al-Anbar where the U.S.-backed “Awakening”, or “Sahwa” militia movement played a decisive role in defeating AQI during the surge in 2007-08. Washington has complained that Maliki largely failed to follow through on commitments to integrate movement members into the Army and security forces.

In an effort to overcome these concerns, Vice President Joe Biden has been in virtually daily consultation with Maliki and key Sunni leaders over the past week.

In a phone call between the two men Wednesday, Biden “encouraged the Prime Minister to continue the Iraqi government’s outreach to local, tribal, and national leaders and welcomed the Council of Ministers’ decision to extend state benefits to tribal forces killed or injured in the fight against the Islamic State of Iraq and the Levant (ISIS),” according to a statement released by the White House.

Maliki also sent a letter to Menendez, reportedly the remaining holdout against the helicopter sale, outlining steps he intends to take both to engage the Sunni community and ensure that U.S. weapons will be used only for counter-terrorism, according to Wednesday’s Daily Beast.

Meanwhile, the United Nations, the Red Cross, and Human Rights Watch (HRW) Wednesday expressed growing concern about the humanitarian situation inside Fallujah amidst reports that food and water were running short. More than 10,000 residents have reportedly left the city since fighting began Jan 1.

HRW charged that government forces have used indiscriminate mortar fire in civilian neighbourhoods, while ISIS fighters and allied militias have deployed in and carried out attacks from populated areas.

Jim Lobe’s blog on U.S. foreign policy can be read at Lobelog.com