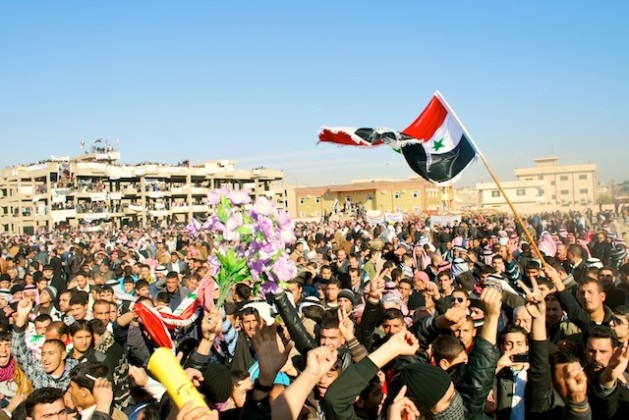 Protesters have been gathering in Ahrar Square, in the Iraqi city of Mosul, since December 2012. Credit: Beriwan Welat/IPS

MOSUL, Iraq, Apr 4 2013 (IPS) - Armoured vehicles and thousands of soldiers masked in black balaclavas guard the entrance to the city of Mosul, 350 kilometres northwest of Baghdad. Arriving here gives one the unmistakable feeling of entering a territory that is still under occupation – only this time, the Iraqi Federal soldiers, not the U.S. military, play the role of the occupying army, locals tell IPS.

Once a key trading post on the fabled Silk Road, Iraq’s second largest city was known for centuries for its high quality marble, and for having revolutionised 18th century Parisian fashion through the supply of its most emblematic product: muslin.

But the beginning of the 21st century brought dramatic changes to this city on the banks of the Tigris River. Trapped in the deadly crossfire between foreign Islamists, local insurgents and Western occupiers for a decade, the capital of the Nineveh region is now the scene of some of the largest anti-government demonstrations Iraq has seen since 2003.

Since last December, speeches and prayers have been strung between large communal meals and public tea rituals in Ahrar Square, in downtown Mosul. The same picture is also recurrent in Anbar and Salahadin, regions of Iraq where Sunni Arabs are in the majority, and where protests reach their peak every Friday.

“The federal police seal the bridges over the Tigris and thoroughly check those individuals that make it in to the square,” Ghanem Alabed, coordinator of the protests in Mosul, told IPS.

“They confiscate tents, blankets, mats … We have to pray on the (hard) ground because even our small prayer rugs are taken away. They try their best to (uproot) the camp but we still manage to sleep in the square every night.”

Being one of the most visible faces of the protests, Alabed has received both threats and bribes from Baghdad. He says he’s not the only one.

“Can you see those men on the roof of that house?” he asks, pointing towards a nearby building. “Those are cops and they spend the day taking pictures of the protesters to identify them afterwards.”

But preventing the outpouring of popular discontent through intimidation is practically impossible, as protesters — children and old men, the unemployed and the salaried, senior politicians and tribal leaders — gather in the tens of thousands every Friday.

The protestors say their grievances are many, but most revolve around the ethnic marginalisation of the majority Sunni population by predominantly Shia political leaders.

“Iran is ruling Iraq today,” Sheikh Safed Maula, a clan leader clad in a black cloak and red turban, told IPS. “Baghdad is in the hands of the Safavids (a name that designates the Persian Shia Muslims), whereas Sunnis walk to prison in line,” he said, referring to the mass detention of Sunnis on what rights groups say are flimsy charges.

Atheel al Nujaifi, governor of the Nineveh province and leading member of Iraqiya, the major opposition bloc in the Iraqi Parliament, is a regular face among the crowds in Ahrar Square.

“Other than the most basic demands like water, electricity and jobs, all these people are here to denounce the abuses they are constantly suffering at the hands of Baghdad,” the political leader tells IPS.

Though Iraqi Prime Minister Nouri al-Maliki has attempted to remove him on several occasions, al Nujaifi continues to espouse his views.

“The government in Baghdad must fall,” he claims. “There’s no other chance for the whole country.”

“We want electricity”, “Put Maliki in prison”, “Iran out of Iraq” – such are the shouted slogans that ring out over the columns of protestors sporting Iraqi flags.

Similar demands can be read on huge banners hanging from a building still under construction next to the square.

In this heavily militarised zone, the press are also under attack.

Reporters at the daily newspaper ‘Iraqion’ said they faced constant harassment while doing their job in Ahrar Square.

“The police often seize our cameras and pester us,” a journalist who wished to remain anonymous for security reasons told IPS, stressing that this is “one of the most dangerous cities for journalists in the world”.

According to local sources 43 journalists have been killed in Mosul since the invasion in 2003.

The scale of the protests in Mosul, as well as in Fallujah and Ramadi – 60 and 110 kilometres west of Baghdad respectively – is such that al-Maliki has denounced them as the work of “foreign agents”.

Anti-government protests gained momentum in mid-December, when several bodyguards of Finance Minister Rafie al-Issawi, the highest-ranking Sunni Arab in the cabinet, were arrested.

From that point on, tensions have been on the rise. On Jan. 25, Iraqi soldiers opened fire on demonstrators in Fallujah, killing nine people. On Mar. 8, the federal police shot one demonstrator in Mosul and wounded several others.

Ghanim al Sabawi, a local doctor, was one of the many witnesses to the incident.

“We had to treat the wounded in the square because the police prevented ambulances from evacuating the injured,” recalls this activist-cum-medical professional, who has spent almost every single night in the square since the protests began in late 2012.

Protest spokesman Salem al Jubury brands such incidents a “clear (attempt) by the security forces to criminalise the protests and arrest our people”.

On Mar. 20, the government in Baghdad decided to postpone the provincial elections scheduled for April in Anbar and Nineveh. Special Representative of the U.N. Secretary-General for Iraq, Martin Kobler, denounced the move, adding, “There is no democracy without elections.”

“The government has lost popularity and intimidation remains its only answer to our plight. Our protests started last December with very humble demands but those are becoming (increasingly) political over time,” al Jubury told IPS.

Experts point out that the demonstrations have been gaining momentum alongside the war in neighbouring Syria, an explosive combination that many fear could put the country on the brink of a civil conflict, a scenario that the Mosul protests’ spokesman does not dismiss.

“We will keep our peaceful struggle in the square until the collapse of the regime in Baghdad,” al Jubury said. “If there are no changes, all options will remain open in the short term.”