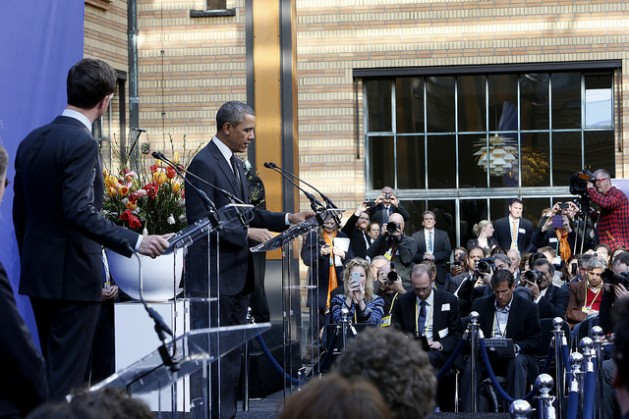 UNITED NATIONS, Mar 26 2014 (IPS) - The two-day, much-ballyhooed Nuclear Security Summit (NSS) in the Netherlands, which concluded Tuesday, was politically haunted by the upheaval in Ukraine – the former Soviet republic that renounced some 1,800 of its nuclear weapons in one of the world’s most successful disarmament exercises back in 1994.

Still, it raised a question that has remained unanswered: Would Russian President Vladimir Putin have intervened militarily in Ukraine if it had continued to remain the world’s third largest nuclear power, after the United States and Russia?

"The political utility of nuclear weapons boils down to a gamble that threatening to use them will cause an adversary to back down." -- John Loretz

The only way in which the conflict would be different now – had Ukraine kept possession of its nuclear weapons after the collapse of the Soviet Union – “is that two nuclear-armed states would be testing each other’s willingness to do the unthinkable in the midst of a political crisis,” John Loretz, programme director of International Physicians for the Prevention of Nuclear War (IPPNW), told IPS.

“The claim that deterrence works and that, therefore, Ukraine would be more secure with nuclear weapons, is facile and unsupportable,” he said.

In an editorial last week, the Wall Street Journal said it is impossible to know whether Putin would have been so quick to invade Crimea if Ukraine had nuclear weapons.

“But it’s likely it would have at least given him more pause,” the editorial said, arguing that Ukraine’s fate “is likely to make the world’s nuclear rogues, such as Iran and North Korea, even less likely to give up their nuclear facilities or weapons.”

And several Middle Eastern countries, including Saudi Arabia and perhaps Egypt, are contemplating their nuclear options should Iran go nuclear.

“Ukraine’s fate will only reinforce those who believe these countries can’t trust American assurances,” the Journal said.

It would then follow that a core premise of the Nuclear Nonproliferation Treaty (NPT), stopping the spread of nuclear weapons, is adverse to the security interests of over 180 nations, which, pursuant to the treaty, have eschewed these horrific devices, he pointed out.

Declaration of the NSS

• reducing the amount of dangerous nuclear material in the world that terrorists could use to make a nuclear weapon (highly enriched uranium and plutonium);

• improving the security of radioactive material (including low-enriched uranium) that can be used to make a "dirty bomb";

“A treaty that undermines the security interests of the vast majority of nations is not likely to survive for long,” said Granoff, a senior adviser of the American Bar Association’s Committee on Arms Control and National Security.

The better question, he argued, is whether the world is better off with more states with nuclear weapons or whether eliminating them universally, as the same treaty also demands, is the better course.

“If nuclear weapons were universally banned and the associated fear and hostility they engender diminished, would we be more able to soberly identify our shared interests in a more secure world?” he asked.

Dr. Ian Anthony, director of the European Security Programme at the Stockholm International Peace Research Institute (SIPRI), told IPS a secure nuclear future cannot be based on a total absence of risk, because that cannot be achieved.

He said it follows that global nuclear security is not a final state, something that can be achieved once, and for all time.

“The instruments needed to reduce nuclear security risk will have to be continuously adapted in line with changing political, economic and technological conditions,” he said.

Anthony also said the long-term sustainability of the nuclear security effort will ultimately depend on successful multi-lateralisation of the process.

Some states with complex nuclear fuel cycles did not participate in the Nuclear Security Summit. At some point, these states will have to be engaged with and included, he added.

The Hague summit was aimed at preventing non-state actors and terrorists from getting their hands on nuclear weapons or nuclear materials.

The summit was the third in a series, the first being held in Washington DC in 2010, and the second in Seoul, South Korea, in 2012.

On the comparison with Ukraine, Granoff told IPS, “The myopia of the Wall Street Journal’s perspective distorts empirically definable threats which can be ignored no longer, amongst them, surely is the ongoing threat of a use of a nuclear weapon by accident, design or madness.”

He asked: “Would we not be better able to cooperate on the existential threats challenging every citizen of Russia, US, UK, China, India, Israel, Pakistan, France, North Korea and the Ukraine, such as stabilising the climate, protecting the rain forests and the health of the oceans, as well as the critically important global threats such as pandemic diseases, cyber security, terrorism, and financial markets?”

Loretz told IPS there is no proof that deterrence works, only that it has not yet failed. Anyone who believes that deterrence cannot fail – that it will work 100 percent of the time – is living in a fantasy world.

“One need only recall the 1962 Cuban missile crisis, where plain dumb luck had far more to do with averting catastrophe than any rational decision making – of which there was precious little,” he said.

As more states acquire nuclear weapons, he pointed out, “we simply come closer to the day when deterrence fails and nuclear weapons are used. Most countries came to this unavoidable conclusion decades ago, which is why we have the NPT and are so anxious to maintain its integrity until we can rid the world of nuclear weapons entirely.”

Loretz said the recent humanitarian initiative emerging from the 2013 Oslo and 2014 Nayarit conferences (on the humanitarian impact of nuclear weapons) is based on an understanding that nuclear weapons themselves are the problem, regardless of who possesses them, and that the only sure way to prevent their use is to delegitimise and eliminate them.

“This humanitarian perspective trumps all claims for the political utility of nuclear weapons, which always boils down to a gamble that threatening to use them will cause an adversary to back down,” he declared.

In the current crisis, he argued, that really would be a game of Russian roulette that no one should be playing.

“Let’s assume, for the sake of argument, that Ukraine had kept its strategic nuclear weapons that remained behind when the Soviet Union broke apart,” Loretz said.

“Would that have made the longstanding differences in the region any less intractable? Would Russia be any less inclined to flex its muscles in a region where it has major political and economic ambitions? Would Ukraine’s relationship with Europe, particularly the NATO states, have been any less complicated or provocative to Russia?”