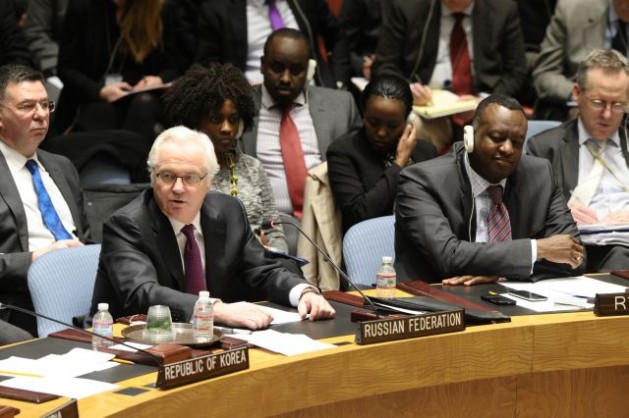 Vitaly I. Churkin (left), Permanent Representative of the Russian Federation to the UN, addresses the Security Council meeting on the situation in Ukraine on Mar. 13, 2014. Credit: UN Photo/Evan Schneider

UNITED NATIONS, Mar 14 2014 (IPS) - The U.S.-Russian confrontation over Ukraine, which is threatening to undermine current bilateral talks on North Korea, Iran, Syria and Palestine, is also in danger of triggering a nuclear fallout.

Secretary of State John Kerry told U.S. legislators early this week that if the dispute results in punitive sanctions against Russia, things could “get ugly fast” and go “in multiple directions.”

"Any confrontation between nuclear armed states runs the risk of escalating to the use of nuclear weapons, whether by inadvertence, accident, or bad decision-making." -- Dr Tilman Ruff

Perhaps one such direction could lead to a nuclear impasse between the two big powers.

According to a state agency news report from Moscow, Russia has threatened to stop honouring its arms treaty commitments, and more importantly, to block U.S. military inspections of nuclear weapons, if Washington decides to suspend military cooperation with Moscow.

These mostly bilateral treaties between the United States and Russia include the 1994 Strategic Arms Reduction Treaty (START), the 2010 new START, the 1987 Intermediate-Range Nuclear Forces (INF) treaty and the 1970 international Nuclear Non-Proliferation Treaty (NPT).

A nuclear tug-of-war between the two big powers is tinged in irony because post-Soviet Ukraine undertook one of the world’s most successful nuclear disarmament programmes when it agreed to destroy all its weapons of mass destruction (WMDs).

Dr. Rebecca E. Johnson, executive director of the Acronym Institute for Disarmament and Diplomacy, told IPS, “Clearly the situation between Ukraine and Russia is deeply worrying.

“Without going into the politics of the situation on the ground, as I don’t have the kind of regional expertise for that, this is not a place for issuing nuclear threats or scoring nuclear points,” she said.

“I’ve been disgusted to see some British and French representatives try to use Ukraine’s crisis to justify retaining nuclear weapons in perpetuity.”

Russia is not directly threatening to attack Ukraine with nuclear weapons, and no one believes it would be useful for the United States and countries of the North Atlantic Treaty Organisation (NATO) to threaten Russia with a nuclear attack, no matter what they do, said Johnson.

Ukraine, which was once armed with the third largest nuclear arsenal after the United States and Russia, and possessed more nukes than France, Britain and China, dismantled and shipped its weapons to Russia for destruction beginning in 1994.

Dr. Ira Helfand, co-president of International Physicians for the Prevention of Nuclear War (IPPNW), said Ukraine is commendable in being one of the few states to have given up its nuclear weapons peacefully, and the people of Ukraine should not have to fear nuclear weapons ravaging their country.

“Any war involves a terrible and lasting human toll, risks spreading and harming people’s health in the region and beyond,” he warned.

In a statement released last week, IPPNW said it underscores the absolute imperative to avoid the possibility of use of nuclear weapons.

“This danger exists with any armed conflict involving nuclear armed states or alliances, which could escalate in uncontrollable, unintended and unforeseeable ways,” it warned.

Dr Tilman A. Ruff, co-chair, International Steering Group and Australian Board member of the International Campaign to Abolish Nuclear Weapons, told IPS the current agreements (e.g. START, New START and INF) are probably most important in that they demonstrate that verified reductions and elimination of whole classes of nuclear weapons are feasible, and hopefully reduce the risk of nuclear war between Russia and the United States.

However, continuing massive nuclear arsenals on both sides; the retention of almost 1,800 nuclear weapons on hair-trigger alert missiles, ready to be launched within minutes; the aggressive eastward expansion of NATO, contrary to what Russian leaders were promised; and the rapid escalation of tension over recent events in Ukraine demonstrate the Cold War has not been firmly laid to rest.

“Any confrontation between nuclear-armed states runs the risk of escalating to the use of nuclear weapons, whether by inadvertence, accident, or bad decision-making,” said Dr Ruff, who is also an associate professor at the Nossal Institute for Global Health, School of Population and Global Health, University of Melbourne.

He said currently all the nuclear-armed states are massively investing in keeping and modernising their nuclear arsenals, and show no serious commitment to disarm, as they are legally bound to do. As long as nuclear weapons exist and are deployed, and policies countenance their possible use, the danger they will be used is real and present.

“The dangerous and unstable situation in Ukraine highlights this starkly, and should dispel any notion that nuclear danger ended 20 years ago with apparent end of the Cold War,” he said.

Dr Johnson told IPS Russian and U.S. nuclear weapons in the region are demonstrably not contributing to deterrence.

“If anything, their presence complicates the current dangers, with the attendant risks of crisis instability and potential military or nuclear escalation or miscalculations, though I’d hope no one would be mad enough to actually use them,” she said.

Politicians that want to keep French or British nuclear weapons need to stop making arguments that undermine the NPT and encourage proliferators, she pointed out.

“It is extraordinarily irresponsible to jump on the bandwagon of this dangerous regional crisis and make Ukrainians feel that they were wrong to rid their newly independent country of nuclear weapons in 1992 and join the NPT as non-nuclear-weapon states,” Johnson said.

It is clearly unacceptable for states armed with nuclear weapons to threaten non-nuclear nations, but this cannot be turned into a rationale either for risking nuclear war between Russia and NATO or for the non-nuclear countries to pull out of the NPT and start arming themselves with nuclear arsenals of their own, she noted.

As brought to the forefront through the recent Oslo and Nayarit conferences on the humanitarian impacts of nuclear weapons, nuclear weapons need to be stigmatised, banned and eliminated, she added.

“Only by removing these weapons of mass destruction from all countries’ arsenals will we be able to fairly address the security needs and aspirations of all peoples – whether in non-nuclear or nuclear-armed countries,” she added.