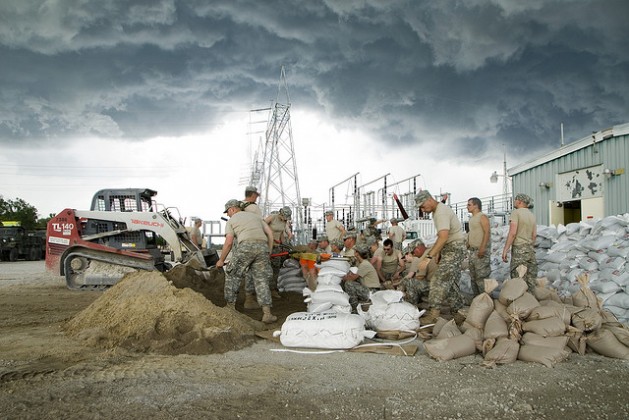 WASHINGTON, Mar 19 2014 (IPS) - In an unusual intervention in policy debates, the American Association for the Advancement of Science (AAAS) warned Tuesday that the world was “at risk of pushing our climate system toward abrupt, unpredictable, and potentially irreversible changes with highly damaging impacts.”

In a 29-report entitled “What We Know,” the prestigious group launched a campaign designed to correct the general public’s perception – fuelled by decades-long efforts by fossil-fuel companies – that there was widespread disagreement among scientists about the reality of climate change and its causes.

Nearly solid opposition by Republican lawmakers has made it impossible for major climate initiatives to be enacted into law.

“Surveys show that many Americans think climate change is still a topic of significant scientific disagreement,” the report said. “Thus, it is important and increasingly urgent for the public to know there is now a high degree of agreement among climate scientists that human-caused climate change is real.”

“About 97 percent” of climate scientists have concluded that human-caused climate change is taking place, according to the report, which was clearly written for a lay audience.

“Moreover, while the public is becoming aware that climate change is increasing the likelihood of local disasters, many people do not yet understand that there is a small, but real chance of abrupt, unpredictable, and potentially irreversible changes with highly damaging impacts on people in the United States and around the world,” according to the report, which also featured four videos to explain the campaign.

The report also uses easy-to understand comparisons regarding the degree of consensus held by climate scientists as to the reality of human-caused climate change, as well as other issues is effects and implications.

For example, it asserts that “(t)he science linking human activities to climate change is analogous to the science linking smoking to lung and cardiovascular diseases,” noting that the most Americans now accept that link and to a great extent have changed their behaviour accordingly.

The report comes amidst efforts by the administration of President Barack Obama to use the executive branch’s regulatory powers to curb the emission of greenhouse gases responsible for climate change and encourage investment in and exploitation of renewable energy sources.

Nearly solid opposition by Republican lawmakers has made it impossible for major climate initiatives to be enacted into law, especially since 2010 when they gained a majority of the House of Representatives.

According to a Gallup poll released Tuesday, 57 percent of U.S. adults believe that humans are responsible for global warming, while 40 percent say they believe it results from natural causes. The 57 percent is up from a low of 50 percent in 2010 but down from 61 percent that prevailed at the turn of the century and as recently as 2007.

The report, which was produced by a 13-member panel of climate scientists from major U.S. universities, stressed that it did not propose to explain why this “disconnect between scientific knowledge and public perception has occurred.”

However, most analysts who have studied the issue have blamed efforts by the powerful fossil-fuel industry, which, much as the U.S. tobacco industry did during the latter part of the 20th century, has funded studies, ad campaigns, and media that cast doubt on the methodology and findings of the larger scientific community.

Just last week, 28 Democratic senators held an all-night debate in the upper chamber on climate change in an effort to draw more attention to the scientific consensus that exists and to the potentially catastrophic consequences of a failure to act to slow or reverse climate change.

Despite such efforts, the general public still does not consider climate change a major concern in their lives, according to Gallup, which has released a series of polls on the issue over the past week.

When asked to choose among 15 issues that worried them the most, respondents in the Gallup found that climate change ranked 14th, just ahead of race relations. Only 24 percent of respondents said they worried about the issue “a great deal”, compared to 59 percent who worried about “the economy”, the top concern in the poll, 39 percent who cited the possibility of a terrorist attack and 37 percent who cited the availability and affordability of energy.

Unsurprisingly, the same poll found a major partisan gap in concern. Only ten percent of Republicans said they worried about climate change, the lowest percentage among all 15 issues. Thirty-six percent of self-identified Democrats, on the other hand, cited climate change as a major worry, although that still ranked 11th out of the 15.

Gallup found a similar partisan gap regarding the perceived causes of climate change: nearly four out of five Democrats (79 percent) believe that it is human-caused, while a minority of only four of ten Republicans (41 percent) agree.

The report’s authors emphasised that they do not consider it their role to “tell people what they should do or must believe about the rising threat of climate change. But we consider it to be our responsibility as professionals to ensure, to the best of our ability, that people understand what we know.”

They also stressed that the “(f)ailure to appreciate the scientific consensus (around the causes and possible consequences of climate change) reduces support for a broad societal response to the challenges and risks that climate change presents.”

Noting the extreme weather events, including heat waves, droughts, sea level rise, and flooding that have taken place in the U.S. and citing polls showing that a growing number of Americans has noticed a worsening of weather conditions in recent years, the report emphasised that climate change is “already happening”.

And in one of its analogies aimed at the lay audience, it compared the way “greenhouse gases have supercharged the climate” with the way “steroids supercharged hitting in the Major League Baseball”.

Similarly, it noted that just as a rise of 1.8 degrees Fahrenheit (0.8 degrees Centigrade) – or how much the Earth’s average global temperature has risen since the late 19th century — “would be seen as significant in a child’s body, so a similar change in our Earth’s temperature “is also a concern for human society.

But it stressed that such changes are unprecedented and are certain to accelerate.

“The projected rate of temperature changes for this century is greater than that of any extended global warming period over the past 65 million years.” Among the impacts are a dramatic shrinkage in Arctic sea ice, the melting of the Greenland and Antarctica ice sheets, the acidification of oceans; the migration of plants and animals toward the poles and stepped up extinction rates; the rise in sea levels; and the frequency and intensity of extreme weather events.

While all of these are likely to take place in the coming decades, the report also cited worse-case scenarios – or tail risks, as they are called in the financial world — that are possible, if not probable. Extreme heat events that currently occur only once in every 20 years could well become annual events; sea level rise could reach around two metres by 2100 resulting in storm surges that could extend flooding well beyond those of Superstorm Sandy.

Abrupt climate change that could result in the sudden death of entire ecosystems or feedback loops that intensify and accelerate destructive trends could also take place, the report noted, comparing the possibility to the 2008 financial meltdown in which only a few experts recognised the risks incurred by the intertwining of real estate and financial markets due to the lack of precedents. As with financial bubbles, “things seem stable, until suddenly they are not.”