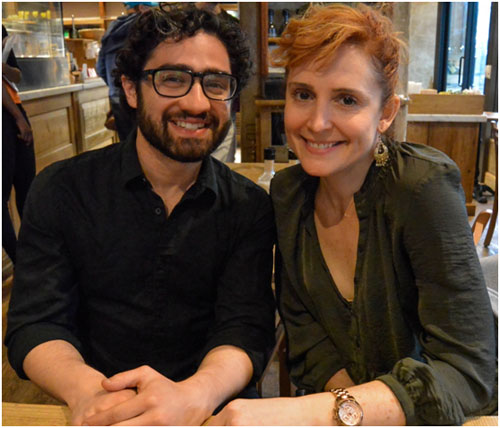 UNITED NATIONS, Apr 29 2014 (IPS) - Starting off with the high-energy number “Welcome to the Madhouse,” the new musical “Committed” gives the audience a mix of ups and downs along with humour, intelligence and awareness of mental health.

Not usually a lively issue, the musical written, directed and choreographed by Tricia Brouk, brings to life eight characters suffering from schizophrenia, depression, personality disorders, bipolar and other illnesses who are being treated in a psychiatric clinic in New York, They are done through song and dance.

Brouk had not initially focused on mental health for awareness purposes but instead wanted to create a humorous production.

“I didn’t originally start researching about mental illness because I thought it would be fun to write a musical about crazy people,” Brouk told IPS. However, once research began Brouk realised it was an issue that needed to be more openly discussed.

“Once I started researching, I knew I needed to honour the realities of these illnesses and to treat them with respect and as much honesty as I could,” she said.

Brouk had not only found out about the different characteristics of the illnesses but also the lack of support from the healthcare system for people suffering from mental illnesses.

“I found it interesting the healthcare system will only allow somebody with severe mental illness whether it’s bipolar, depression or schizophrenia to be hospitalised for a limited time and then they’re released without proper care,” she said. “They are released without being treated and not knowing how to treat their chemical imbalance and putting themselves and others at risk.”

According to a 2011 World Health Organisation (WHO) report , the majority of primary healthcare doctors and nurses do not have official in-service training in mental health in the U.S.

On a global level, WHO found that only 77 percent of mental hospital admissions remained in hospital care for more than one year and only 32 percent of countries have the facilities to provide follow-up care.

Another report by the National Comorbidity Survey Replication in 2005, on the treatment of mental disorders, said that treatment fell below minimum quality standards in the U.S.

Andrew David Sotomayor, who wrote the lyrics and music for the show, and also plays the character of David who is anti-social, said that during his research he found that many people were turning to the Internet for help instead.

“I was able to get on to the NAMI (National Alliance on Mental Illness) message boards. They have open forums for people to discuss and its very similar to a group therapy situation,” he said.

“I was able to see them discuss their depression and there were more severe cases where they could not even get to a group or a therapist but could get to their computer screens to communicate.”

The 80-minute musical is set in the late 1980s in the Upper East Side as Brouk was inspired by a clinic in the area that was torn down in 1989.

“There was a rush for these people to get better in one year before the building was torn down and so for me it was that pressure and urgency that excited me,” she said.

Last year during World Mental Health Day on October 10, the U.N. Secretary-General Ban Ki-moon said that people are “reluctant to seek help because of the stigma surrounding mental illness.”

Ban also spoke about the World Health Assembly’s Mental Health Action Plan to the year 2020 that aims to have 80 percent of all countries to have a developed or updated policy for mental health in line with international and regional human rights instruments by 2020.

The “Committed” premiere that ran from April 17-20 hopes it has brought awareness to all mental illnesses. Brouk would like to have a New York City on-going run of the show and to have the production shown at universities and regional theatres for awareness.

“We let everybody know right away that it’s not going to be a depressing ride. We start off with energy and then we take them off guard. It’s an up and down journey, just like life,” Brouk said.