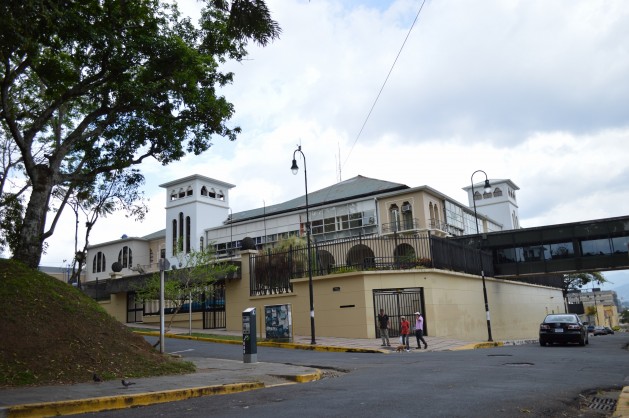 The Costa Rican legislature, which has to decide on the future of the country’s climate change legislation. Credit: Diego Arguedas Ortiz/IPS

SAN JOSE, May 21 2014 (IPS) - Eight months after it was introduced in the Costa Rican legislature, a bill to create a framework law on climate change is faltering after undergoing modifications that have run into criticism from environmentalists and experts – a situation made even more complex by the recent change of government.

The bill presented to this Central American country’s single-chamber parliament in August 2013 was aimed at establishing “an operational framework for the development of public policies on climate change mitigation and adaptation.”

But it stalled just ahead of the second and final vote.

Due to mounting opposition from the climate change officials of the previous administration, groups of climate change experts and a significant number of lawmakers, the bill was sent back and modified.

On Apr. 9, in the last month of the previous legislature, an amended version of the bill was presented in the Environment Commission, with a new name: “law on institutional adaptation for climate change”.

Negotiations of the bill are now resuming in the 57-seat Legislative Assembly sworn in on May 1, whose makeup changed significantly.

“The bill in its present shape and form is appalling, it doesn’t solve anything, it just makes things worse,” the director of climate change questions in the Ministry of the Environment and Energy, William Alpízar, who has been in his post since the administration of former President Laura Chinchilla (2010-2014), told IPS.

He said his office had told the Environment Commission that the bill should be eliminated.

Alpízar remains in his post even though centre-left President Luis Guillermo Solís took office on May 8, putting an end to the domination of the country by the two traditional parties: Chinchilla’s National Liberation Party (PLN) and the Social Christian Unity Party (PUSC).

Solís, who heads the Citizen Action Party (PAC), won 77 percent of the vote – the largest margin ever seen in a free election in Costa Rica.

Alpízar complained that the concerned sectors were not consulted for the bill, which he said creates unnecessary red tape, fails to take into account prior legislation, and is not even up-to-date.

“This is something that requires a dialogue with citizens in vulnerable areas, and with the public transport sector,” Olga Corrales, the coordinator of the Carbon Neutrality Strategy at the University of Costa Rica, told IPS. “Effective citizen participation is needed in the drafting of the law.”

But the bill’s sponsor, Alfonso Pérez, says the law is necessary because it creates an institutional framework for addressing the phenomenon of climate change.

Pérez, a leader of the PLN, which had a majority in the previous legislature, is no longer a lawmaker.

He said the Ministry of the Environment and Energy’s climate change office – the highest-level authority on the subject – is a technical body that lacks the necessary political clout.

The original draft of the framework law created two councils, one political and the other technical, to regulate Costa Rica’s climate change practices.

But the amended version would only create a National Commission on Climate Change (Conclima), conceived of as an effort to integrate several ministries – Environment and Energy, Agriculture and Livestock, Education, Health, and Public Works – along with other centralised institutions.

The main change in the new draft of the bill is the creation of Conclima, which would be given nearly two dozen different functions, ranging from promoting education on climate change in schools and universities to monitoring changes in zoning and a restructuring of transportation with the aim of reducing greenhouse gas emissions.

Pérez is the representative in Costa Rica of the Global Legislators Organisation (GLOBE International), made up of parliamentarians from over 80 countries committed to developing and overseeing the implementation of laws in pursuit of sustainable development, in areas like forests, climate change and natural capital.

In its fourth report on climate legislation, GLOBE International highlighted Costa Rica’s bill and said it was slated to pass this year.

“The term ‘framework’ gave rise to certain expectations,” Pérez told IPS. “The second bill presented talks about ‘institutional adaptation’. But it does put the right emphasis on creating the necessary institutional framework in the country. The previous administration and minister did support it.”

But the new government has doubts about the bill, which the PAC had opposed in the prior legislature. Minister of the Environment and Energy Édgar Gutiérrez told IPS that the bill needs to be reviewed, although he preferred not to offer details.

In the new parliament, where bills need a boost from one or two legislators, no one has yet taken the initiative under his or her wing.

The bill’s critics include lawmakers considered “leaders” on the environment in the legislature.

“The bill doesn’t say anything, it is a statement of good intentions and creates more red tape, while it fails to establish clear mechanisms and policies,” said Edgardo Araya, a parliamentarian with the left-wing Broad Front, told IPS.

Araya, one of the country’s leading environmental lawyers, asked to form part of the Environment Commission, which has to approve the bill before it can continue wending its way through Congress.

Olga Corrales and Araya agreed that the bill fails to establish that climate change is a development issue, even though it does point in that direction by indicating that Conclima should promote multisectoral measures to tackle climate change.

Environmental organisations like Costa Rica Limpia or ARCA, as well as the country’s most prominent climate scientist, Lenín Corrales, are also opposed to the bill.

Pérez said the initial spirit of the draft law harked back to a 2011 report by the comptroller’s office which asserted that the climate change office is merely a technical body lacking in operational capacity.

What is clear is that Costa Rica does not have a comprehensive law on climate change.

The future of another bill introduced by Pérez in parliament is also uncertain: the law on “valuation of natural capital and integration of green accounting in planning for development”, which would set a value on biodiversity, water and soil.

The value determined would be added to the technical criteria used in the process of granting construction or operating permits, and could also help to assess the weight of natural assets in the national economy.