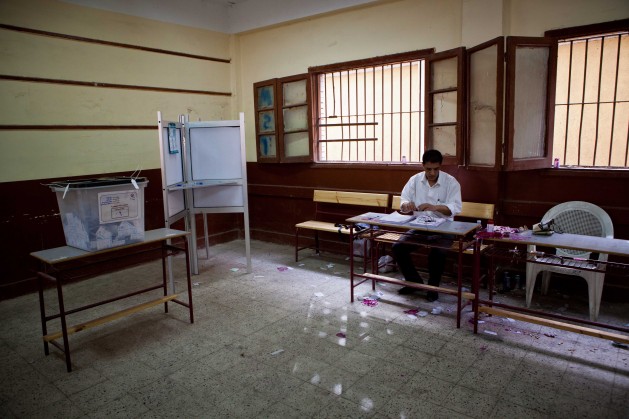 CAIRO, May 29 2014 (IPS) - With a result already known before the race started, many did not even bother heading to the polling stations and the streets in Cairo were unusually empty during the election process that ended Wednesday, just like the ballot boxes.

Egyptians had been called on to vote for their second president in two years, but the low turnout threatened to undermine the credibility of the popular candidate. former army chief Abdel Fattah el-Sisi, who wanted to show the world once and for all that the overthrow of the first freely-elected president, Muslim Brotherhood’s Mohamed Morsi, was not a coup by the military but a revolution backed by the Egyptian people.

Sisi himself had aimed for an 80 percent turnout but, after two days, this turnout seemed unachievable. Observers estimated that 20 percent of the electorate had cast votes over two days, while organisers of the campaign of Hamdeen Sabbahi, Sisi’s only opponent, said they had logged a turnout of no more than 15 percent turnout.

In a first attempt to boost these numbers, Egyptian authorities extended the voting on Tuesday by an extra hour. And shortly after that, another effort was made by granting an extension of an extra day on Wednesday.

“Real change lies in the hands of the youth. We are the ones fighting for a better Egypt, but we need time. When we reach the age to rule the country, we will do it differently” – 23-year-old law student

The Presidential Election Commission defended this decision stating that it was a response to calls by citizens who were struck by the heat wave in Egypt and therefore could not go to vote. But this latter attempt was seen by many as a fraud.

“This was ridiculous,” said Omar Amin, a 28-year-old architect. “We all knew it is not about who would win these elections, but how many votes there would be. It made no sense to extend the voting by another day, just to reach the numbers they had in mind.” Amin is one of many young people who decided to stay at home instead of casting a ballot.

But the concerns about turnout were already clear long before the heat wave arrived on Tuesday. After the authorities declared the second day of voting a national holiday and several other measures were taken to improve the turnout, the worry was crystal clear. Major shopping centres had to close their doors hours before normal closing time to make sure Egyptians would not use their newly announced holiday for shopping instead of doing their duty as citizens.

Egypt’s highest Islamic state-run authority Al-Azhar preached that failure to vote was “disobeying the nation.” And the head of the Coptic church in Egypt, Pope Tawadros, gave a speech exhorting voters to head to the polls

“It is such a paradox to use religion and religious authorities to move people to voting,” a women in her thirties who did not want to give her name, told IPS. “Those who are fighting the Muslim Brotherhood by calling them terrorists because they used religion as an instrument to gain popularity, are now doing exactly the same thing.”

But not only the churches and mosques tried to convince Egyptians to vote. State television as well as national radio scolded the public for not showing up at the polls. A TV anchor said that those who were not voting “should be shot”, or “at least should shoot themselves.”

But not everybody was convinced by the propaganda of local media loyal to both the interim government and frontrunner Sisi. “I am not voting. Even if I were in Alexandria where I should be voting, I wouldn’t make the effort. I’d rather shoot myself,” Marc Dimitri joked during the elections, referring to the controversial quote of the TV anchor.

Dimitri is a 23-year-old law student from Alexandria, residing in Cairo. He doesn’t believe Egypt’s future lies in the hands of the current politicians. “Whoever will be our president, now or in the coming years, will not be able to make a change,” he believes. “Real change lies in the hands of the youth. We are the ones fighting for a better Egypt, but we need time. When we reach the age to rule the country, we will do it differently.”

Ahmed Mohamed Seif, a 24-year-old colleague of Dimitri agreed. “We have an incredibly strong judiciary system, based on the French system. The problem in Egypt isn’t the skeleton of institutions, it’s the executive part. Egypt is corrupt. That’s what needs to be changed, and only a new generation can do this.”

Young Egyptians seemed to stay far away from the polls. The women lining up at the “females only” polling station in the Garden City district of Cairo were all in their early forties or older. They believed their vote would make a difference. “Sisi will win the elections! Our hero, I love him,” chemistry professor Malak Mehdi shouted. “He understands the Egyptian people, he knows our needs. Sabbahi is nobody, Sisi will assure the stability of Egypt,” she added.

While the female crowd was chanting for Sisi, patriotic songs blared from loudspeakers just outside the polling station. Maya Husein, a 52-year-old woman next in line, chimed in: “Sisi is a strong man with a strong hand, this is what Egypt needs. He freed us from terrorism and will continue protecting us.”

Sisi’s propaganda machine seemed to have worked. The adulation of Sisi over recent months pushed many to vote for him, mostly women who adore him and see him as the saviour of the nation.

But a couple of blocks away, at a local coffee shop, some friends gathered for tea instead of casting votes. Like Dimitri and Seif, they questioned the capability of Sisi to rule their country. “His (Sisi’s) campaign was totally focussed on the war on terror, he didn’t talk about the future. But what is next? What will he do after all Islamists are jailed or killed?” wondered 31-year-old Nader Abdelrahmen.

“A year ago we were told that someone would be held accountable for the hundreds of deaths during the dispersal (of a pro-Morsi sit in at Rabaa in August 2013, ed.). Today we see all Muslim Brotherhood leaders and its members arrested or even sentenced to death – nobody talks about the massacres anymore. And we are the next to come: they have already started threatening us. Is this justice? Is this how he will rule over Egypt?” complains Ammar Abubakr, a prominent 33-year-old graffiti artist and activist.

Although the Brotherhood called for a boycott of these elections, and most of its supporters stayed away from the ballot boxes, there are apparently many other reasons why the turnout was beneath all expectations – and the extension of the voting did not substantially affect the final results.

Number one in this race for president is he who stayed at home. Sisi ended up right behind, with 90% of the votes out of the roughly 40 percent turnout, which makes him the new leader of Egypt – despite the heat.