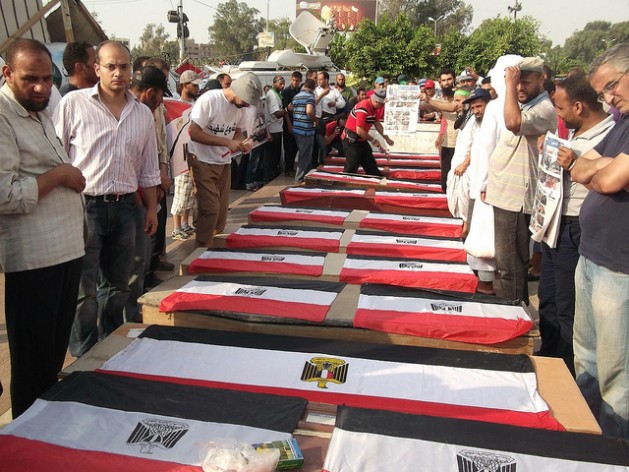 WASHINGTON, Mar 26 2014 (IPS) - International human rights groups have strongly denounced Monday’s sentencing by an Egyptian court of 529 Islamists to death for a riot in which one policeman was killed.

Egypt specialists here say the sentences, which are widely seen as the latest in a series of steps taken by the authorities to crush the Muslim Brotherhood, as well as other dissident forces opposed to the military-backed government, are certain to fuel increased radicalisation in the Arab world’s most populous nation.

“What all this repression creates is a very deep well of anger.” -- Michelle Dunne

“What all this repression creates is a very deep well of anger,” said Michelle Dunne, an Egypt specialist at the Carnegie Endowment for International Peace and co-chair of the Working Group on Egypt, a coalition of neo-conservative and liberal internationalist Middle East analysts who have informally advised the administration of President Barack Obama since the dawn of the Arab spring in late 2010.

“Where these kinds of actions are taking Egypt is very worrisome. …We now have an ally that might be headed toward serious and persistent instability,” according to Dunne, who noted that another court sentenced a group of 17 university students for rioting just a few days ago. Although no one was killed or seriously injured in that incident, each of the students received 14 years in prison.

Indeed, while the administration of President Barack Obama, which Monday described the mass death sentences as “defy(ing) logic,” had hoped to fully normalise military ties that were partially suspended after the July coup against President Mohamed Morsi, the latest court actions – along with the designation by the military-backed government of the Brotherhood as a terrorist organisation – would appear to make that much less likely.

The death sentences, which Amnesty International and the New York Times described as “grotesque” and “preposterous”, respectively, followed a one-day trial before three judges in Minya in which most of the defendants were absent or had no or very limited legal representation. As noted by Human Rights Watch (HRW), the prosecution failed to put forward evidence implicating any individual defendant.

“This trial is just one of dozens of mass trials taking place every day across Egypt, riddled with serious due process violations and resulting in outrageous sentences that represent serious miscarriages of justice,” she noted.

The defendants were all indicted for alleged participation in a riot in Minya, a Brotherhood stronghold in central Egypt, last August, some six weeks after a military coup against the country’s democratically elected president, Mohamed Morsi. The riot, which followed two massacres of hundreds of peaceful Brotherhood protestors in Cairo, resulted in the destruction of several churches and police stations and the death of one police officer.

Analysts here said the mass sentencing, the largest in modern Egyptian history, may have been motivated by a desire on the specific court’s part to retaliate against Morsi’s efforts to gain greater control over the judiciary or by its acquiescence to instructions by the police or interior ministry to make an example of the case as part of a broader strategy to intimidate the opposition. Both the verdicts and the sentences are subject to appeal.

If, indeed, the intent of the verdicts and other repressive measures is to restore stability to Egypt, the strategy does not appear to be working, according to Dunne, who Monday released a new report documenting both the growing repression and the rise in violence directed against the government.

“Egyptians have suffered through the most intense human rights abuses and terrorism in their recent history in the eight months since the military ousted then president Mohamed Morsi,” according to the report, “Egypt’s Unprecedented Instability by the Numbers.”

Citing statistics by Egyptian rights groups and other sources, the report found that a total of 3,143 people have been killed as a result of political violence between Jul. 3 last year and the end of January. Of the total, at least 2,528 civilians and 60 police were killed in political protests and clashes, and another 281 others are estimated to have been killed in terrorist attacks.

Some 16,400 people have been arrested during political events, while another 2,590 political leaders – the vast majority associated with the Brotherhood – have been rounded up and remain in detention, the report said.

All of these tallies, according to the report, show that current level of repression actually exceeds the scale reached under former President Gamal Abdel Nasser, who tried to crush the Brotherhood in the 1950s and 1960s by rounding up hundreds of members and executing a dozen of their leaders, and in the aftermath of the assassination of former President Anwar Sadat in 1981.

The report also found, the rate of terrorist incidents – and the deaths they’ve inflicted — in the seven months that followed the Jul. 3 coup have also surpassed the rates reached between 1993 and 1995, when more than 300 people, including police, extremists, civilians and tourists fell victim annually to the war between the security forces and Al-Gama’a al-Islamiyya (The Islamic Group) of which the current Al Qaeda chief, Ayman Al-Zawahiri, was a top leader.

“(M)ilitants have shown that they are capable of inflicting far more damage should they choose to do so,” according to the Carnegie report, which noted that insurgents have “shown increasing sophistication” in carrying out attacks against police officers, soldiers, and high-level government officials but have not yet shown interest in inflicting mass casualties.

The latest developments appear to have put the Obama administration, which suspended joint exercises with Egypt immediately after the coup and subsequently suspended delivery of some weapons systems, including attack helicopters and tanks, to coax the military into pursuing a less repressive policy toward the Brotherhood, in particular.

Saudi Arabia, with which Obama hopes to patch up relations badly strained by his failure both to support former Egyptian President Hosni Mubarak at the outset of the Arab Spring and to intervene more aggressively on the side of rebels in Syria when he visits Riyadh later this week, has strongly backed the military’s crackdown against the Brotherhood and are expected to press their guest to do likewise.

The Saudis have not only provided billions of dollars in budgetary support for the regime; they have also offered to make up for any weapons withheld by Washington by buying comparable systems from other arms suppliers, including Russia, on Egypt’s behalf.

“The U.S. and Saudi Arabia have a basic disagreement about what’s going on in Egypt,” according to Dunne. “The Saudis would say whatever heavy-handed measures the authorities are taking is necessary to defeat terrorism. Most U.S. officials says these tactics are causing terrorism and potentially driving Egypt toward persistent instability.”