In this column, José Graziano da Silva, Director-General of the Food and Agriculture Organization of the United Nations (FAO), looks at the challenge facing policymakers in fostering biofuel production while protecting food supplies.

ROME, Jun 3 2014 (IPS) - Modern biofuels have become a fact of life, part of a quest for more cost-effective and environmentally sustainable businesses and lifestyles. But to be truly sustainable, biofuel production must strike a balance between its benefits and its potential hidden costs, between energy security and food security.

With the right policies, it does not have to be an either-or situation. It can be a win-win scenario. And that is what we should strive for. 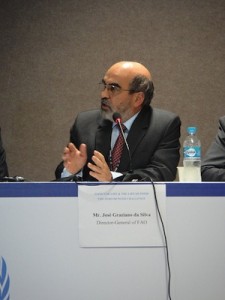 Concerns about higher fossil fuel prices, rising energy import bills, geopolitical changes and environmental issues like climate change are not likely to go away anytime soon, if at all. One of the major challenges that policymakers will continue to face in addressing these issues is fostering biofuel production while protecting food supplies and pricing, especially in developing and emerging economies.

Like the opposing forces that work against each other in nature to create a state of equilibrium, policies can be more effective if they are flexible enough to counteract varying market conditions and respond to changing human needs.

A number of countries have already developed and implemented policies to make their national biofuel markets more flexible to accommodate changes in agricultural feedstock and fossil fuel markets. There is much room to improve on these options and extend them to other markets.

More than 60 countries have mandates specifying the percentage of fuel content that should come from renewable sources.

Where there are mandates in place, allowing additional flexibility would be one way to minimise pressure on food prices. For instance, annual mandates for renewable fuel content could be stretched to cover longer periods of time – meeting mandates over five or 10 years, instead of every year.

Better coordination of policies among governments is also important. Coordination among the United States, the European Union and Brazil policies could avoid large trade flows in ethanol. It could also reduce additional demand on certain feedstock, when the prices are already high.

Greater flexibility could also be built in “at the pump”, through a broader promotion of flex fuel technology. This approach would allow both fuel blenders and consumers to respond to changes in relative prices by switching between fossil fuels and biofuels, as appropriate.

Not only could existing schemes be made more flexible, but also, biofuel policies could be used to generate funds that allow food consumers in poor countries to cope with the possible adverse impacts of price hikes. One such option could be to implement a variable fee on blending requirements.

And there are even more straightforward measures that could be used to help the food insecure cope in high and volatile food-price environments.

This is where social provisioning schemes can make a difference. They can help to level the playing field for people whose capacity to buy food or make investments in income-generating activities may be out-of-sync with rising prices.

In some countries, cash transfers and other schemes have provided important safeguards for families and smallholder agricultural producers in vulnerable communities.

In addition to making existing policies more flexible, the second major challenge is to fully harness the potential of biofuels for food security. In many developing countries, a lack of access to affordable and continuous energy supply is the single most important factor that limits agricultural productivity, and in turn, sustainable food security.

In many landlocked parts of sub-Saharan Africa, farmers may pay twice or three times the price of fossil fuels seen on world markets. Electricity is often completely absent or dependent on generators that are run on expensive fossil fuels.

Unstable and costly supplies of fossil fuel-powered energy do not allow farmers to mechanise production and step up food output, and may even increase wastage and spoilage. Providing farmers with jatropha or palm oil-based diesel could be an effective solution. Supporting investment and training in the production and use of biofuels could yield benefits, year after year.

Biofuel production and food security need not be mutually exclusive, but the intrinsic link between the two does need to be acknowledged in the policymaking process, in order to maintain a consistent balance between energy security and the right of all people to adequate, nutritious and affordable food.

No doubt, reconciling food and energy security in so many different environments is a tall order. But introducing greater flexibility in implementing existing policies and doing more to harness the potential of biofuels for farmers in food and energy-poor environments are opportunities which should not be missed. (END/IPS COLUMNIST SERVICE)