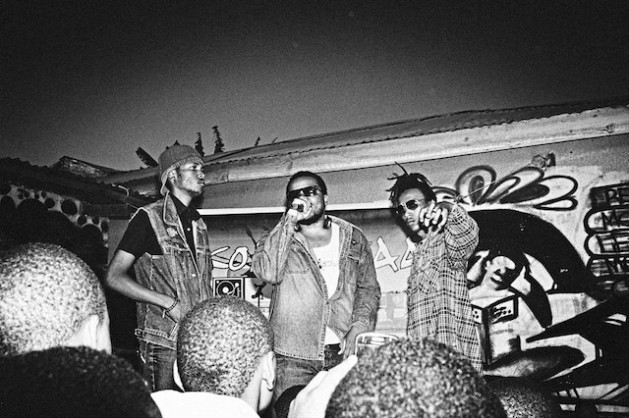 ARUSHA, Tanzania, Jun 18 2014 (IPS) - Inside a dark, cramped, music studio on Arusha’s hillside slum of Kijenge Juu, a thumping hip hop beat rattles the window-less room.
A soft-spoken 26-year-old who goes by the name Raf MC steps up to the microphone. He glances down at a piece of paper in his hand. Taking a deep breath, he starts to deliver rhymes in Swahili, the unifying language of Tanzania’s 47 million people: “Hip hop game sio kama tu ma game mengine [The hip hop game is not like any other game]…”

Three other Arusha MCs stand behind the microphones: Pacha the Great, 21, Sight Mo’, 28, and Motra the Future, 20. Together they call themselves KINGS, which stands for Kijenge, Ngalimi and Sekei, three of the city’s most notorious slums.

“Hip hop in Arusha has never just been about songs and beats. It’s always been about substance. It’s because of hip hop music that a lot of us avoided becoming criminals.” -- former X Plastaz member, Mohamed Yunus Rafiq

“We all grew up and live here,” Raf MC tells IPS. “I’m from Sekei, Motra is from Kijenge, Pacha and Sight Mo’ are from Ngalimi.”

KINGS are a hip hop group brought up in the nurturing environment of northern Tanzania’s underground hip hop scene. Acheni Blah Blah is the first single released by them and the group is expecting to release an album later this year.

“Arusha is known as a tourist city in Tanzania located near most of the countries national parks and major attractions,” Bakari tells IPS. “What people don’t know is there’s an emerging hip hop movement here that dates back to the late 1990s.”

A few years ago, Tanzanians started to fear Arusha’s hip hop scene was disappearing as more young people began turning to jobs in the burgeoning tourism industry, leaving music behind because of the lack of opportunity.

“There were some tough times that we faced trying to promote local hip hop shows,” Bakari says. “People stopped buying records and turning up to performances.”

Bakari and Shirima stepped up to the challenge and started a showcase for Tanzania’s hip hop talent. A few times so far this year, music fans have gathered outside of Watengwa recording studios in Kijenge Juu. Graffiti covers the doors and walls. Over the stage area, the words “Read more, learn more, change” are inscribed alongside a young person holding a book.

But S.U.A. isn’t only an event. It also acts as a support network for up-and-coming artists like KINGS. Bakari and Shirima host workshops the week before every show to select which artists get to perform.

“We always choose those eager to learn about the history of hip hop and how it took shape in Tanzania,” Shirima says. “That’s how we found KINGS. Now their music is playing on radio stations across the country.”

“Hip hop in Arusha has never just been about songs and beats. It’s always been about substance,” former X Plastaz member Mohamed Yunus Rafiq, 38, tells IPS. “It’s because of hip hop music that a lot of us avoided becoming criminals.”

Rafiq was a young man during the transition from socialism in Tanzania to the free market. He admits hip hop music in Tanzania is still heavily influenced by founding President Julius Nyerere’s brand of African socialism, known in Swahili as Ujamaa.

“The 1967 Arusha declaration officially made Tanzania a socialist state,” Rafiq says. “In the 1980s, there were Cuban doctors and Russian military advisors everywhere. I remember going to ANC [South Africa’s African National Congress] meetings as a boy and receiving candy from Russians.”

All of this made Arusha the international city it is lauded as today. Now it is home to many international organisations such as the United Nations. Arusha was even once referred to as “The Geneva of Africa” by former U.S. President Bill Clinton.

This all made Arusha fertile ground for a socio-political music scene to flourish. From “muziki wa dansi [Swahili jazz music]” which gained prominence in the 1960s to today’s bongo flava music popular with youth across the continent, Tanzanian hip hop seems to remain true to its roots – and in Swahili.

“The Bongo Flava you hear on the radio now is a blend of rap, dancehall music and R&B. What we do here is much different,” Shirima says. “We focus on the four pillars of hip hop: breakdancing, emceeing, DJing and graffiti. We hope by teaching the fundamentals that it will empower youth to make change in the community.”

By promoting hip hop artists to express themselves in the Swahili language also empowers Tanzanian youth to continue reaching new heights. Across East Africa, from Tanzania and Kenya to Uganda and eastern DRC, hip hop fans are taking notice.

“We’re a linguistic nation. Swahili is a creative language that adapts quite nicely to hip hop,” Rafiq says.

As the hip hop beat fades away, Raf MC takes a step back from the microphone and folds up his piece of paper. “We just want to represent our culture and our city. We do this by using music to educate youth on how to do something positive in the community,” he says.