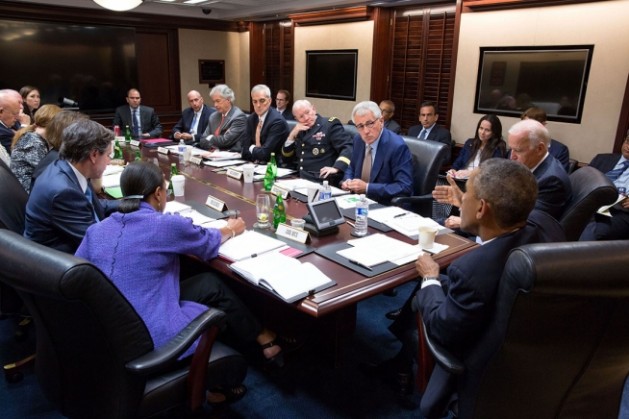 WASHINGTON, Sep 12 2014 (IPS) - U.S. President Barack Obama’s new strategy to “degrade, and ultimately destroy” the Islamic State of Iraq and Syria (ISIS) is being met with widespread scepticism among both hawks and doves, as well as regional specialists.

While Congress is expected to acquiesce, if not formally authorise, the plans he outlined in his nationally televised prime-time speech Wednesday night, lawmakers on both sides of the aisle have not been shy about expressing reservations.

“The proverbial 64,000-dollar question is whether the seemingly mediocre Abadi government can peel enough of [the Sunni Arab tribes and veteran Awakening cadres] away from active and passive support for ISIS or from the sidelines.” -- Wayne White

“While the president presented a compelling case for action, many questions remain about the way in which [he] intends to act,” said Republican House Speaker John Boehner.

Indeed, while he adopted a determined and confident tone that won plaudits even from Republicans like Boehner, it is no secret here that Obama, who has made Washington’s extraction from Middle East wars a legacy issue for his presidency, has consistently resisted pressure to escalate U.S. military involvement in the region.

Speaking on the eve of the 13th anniversary of al-Qaeda’s 9/11 attacks on New York and the Pentagon, Obama announced that he will increase U.S. support for Iraq’s army and the Kurdish Peshmerga with more training, intelligence, and equipment and will dispatch 475 U.S. military personnel to join the 1,000-plus who have deployed there since ISIS swept across much of the northern and central part of Iraq in June.

At the same time, he pledged that the campaign “will not involve American combat troops fighting on foreign soil.”

In addition, he said the U.S. will carry out airstrikes against ISIS targets “wherever they exist,” not only in Iraq, but, most significantly, in Syria, as well.

Washington, he said, is also assembling “a broad coalition of partners”, including NATO, and, more importantly, the Sunni-led Gulf states, Jordan, and Lebanon whose governments pledged support for the anti-ISIS campaign and the new government of Iraqi Prime Minister Haider Al-Abadi, during a meeting Thursday with Secretary of State John Kerry in Jiddah.

And Obama asked Congress to swiftly approve a pending request for 500 million dollars to train and equip anti-government and anti-ISIS Syrian rebels.

Saudi Arabia, a major backer of various factions in the three-year insurgency against President Bashar Al-Assad, has agreed to host training camps for these “moderate” rebels, according to administration officials.

This “comprehensive and sustained counter-terrorism strategy” – which he compared to Washington’s long-standing operations in Yemen and Somalia — will “take time to eradicate a cancer like ISIL (Islamic State of Syria and the Levant),” Obama said, using the administration’s preferred acronym.

While the plan gained guarded approval from most lawmakers – who, facing mid-term elections in November, are particularly sensitive to a sudden hawkish shift in public opinion – many said it raised as many questions as it answered, including whether Obama has the legal authority to order strikes against ISIS, especially in Syria, without getting explicit Congressional authorisation.

At the same time, hawks questioned whether the strategy – notably Obama’s pledge not to introduce combat troops – was sufficient to achieve its goals.

“Obama’s ‘strategy’ has no chance of success,” wrote Frederick and Kimberly Kagan of the neo-conservative American Enterprise Institute (AEI) and the Institute for the Study of War, respectively, on the Weekly Standard’s website.

The two Kagans, who helped devise the Bush administration’s “Surge” to curb Iraq’s Sunni-Shi’a conflict in 2007, argued that a counter-terrorism (CT) strategy would not work against a full-fledged insurgency, which they said ISIS has become. “It’s awfully hard to develop a sound strategy when you start by misdiagnosing the problem so profoundly,” they wrote. Frederick Kagan has argued that 10-15,000 U.S. troops are necessary for Iraq alone.

Others disagreed. “Getting more U.S. troops on the ground is precisely what … [ISIS chief Abu Bakr] Al-Baghdadi wants,” Col. Lawrence Wilkerson (ret.), former Secretary of State Colin Powell’s chief of staff, told IPS. “A target-rich environment is what they want, and in their area.

“If the Iraqis and others are not up to defeating [ISIS] forces, then U.S. and allied airpower, some advice on the ground, and intelligence assistance should be sufficient to do so. …[ISIS] is not 10 feet tall, not even four – despite all the media hype to the contrary,” he said.

In Iraq, defeating ISIS will depend largely on whether Abadi follows through on his pledge to share power with Sunni Arabs and fully integrate them into a new security structure, according to regional experts.

“One hundred years of war …has demonstrated that air power can only succeed if a robust ground force is ready to take advantage of air strikes to physically take and occupy territory,” according to Wayne White, a former top State Department Middle East intelligence officer now with the Middle East Institute (MEI).

“The president is not ignorant of this dictum: hence, his part in ousting the loathsome [former Prime Minister Nouri al-] Maliki and the need for a credibly inclusive new government in Baghdad that can revive the Iraqi Army,” he wrote in an email exchange.

“…The proverbial 64,000-dollar question is whether the seemingly mediocre Abadi government can peel enough of [the Sunni Arab tribes and veteran Awakening cadres] away from active and passive support for ISIS or from the sidelines,” White added. “Only a sizeable Sunni Arab force from within could make considerable headway along with airstrikes in unhinging ISIS from key holdings like cities and large towns.”

Even if the strategy in Iraq succeeds, however, attacking ISIS in Syria will be far more difficult, in major part because Western-backed rebel factions are “much weaker than two years ago,” according to former acting CIA chief Michael Morrell whose assessment echoed that of most regional experts, some of whom, such as former the former U.S. Amb. to Baghdad, Ryan Crocker, have argued for working with Assad as the lesser evil – a step that the administration appears so far to reject.

“The speech left major questions about Syria unanswered,” said Paul Pillar, a former top CIA Middle East analyst. “If ISIS is to be set back, who fills that vacuum? If it is the Assad regime, how does that square with the continued U.S. opposition to that regime? If it is supposed to be someone else, how does that square with the persistent lack of unity, strength, and credibility of the so-called moderate opposition?”

Along with Wilkerson, regional experts worried that Obama’s strategy is susceptible to “mission creep”.

“If the air strikes do not ‘defeat’ ISIS, what policy will the president pursue considering that he ruled out putting boots on the ground?” asked Emile Nakhleh, a former director of the CIA’s political Islam strategic analysis programme.

He also questioned the commitment of the Sunni Arab states that signed on to the strategy in Jiddah “considering that domestic radical Islamists are already posing a serious challenge to such countries as Saudi Arabia and Jordan.”

He noted that Turkey, with the most potent military force in the region and whose Incirlik air base has been used in the past for U.S. operations over Iraq, had participated in the Jiddah meeting Thursday but failed to sign the summit statement.

Like Wilkerson, Nakhleh also suggested that Obama’s hand been forced as a result of the “media frenzy about the hyped-up ISIS threat” which some commentators have blamed on the sensational coverage of the recent beheadings by ISIS of two U.S. journalists and overheated rhetoric by some of Obama’s top officials, including Kerry and Pentagon chief Chuck Hagel.

A poll conducted last week by ABC News and the Washington Post found 71 percent support for air strikes against “Sunni insurgents in Iraq” – up from 54 percent in mid-August and 45 percent in mid-June as ISIS swept across Iraq.