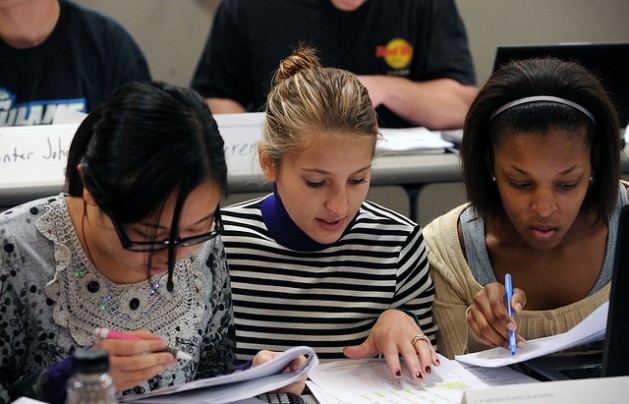 2015 is shaping up to be ''The Year of Cli-Fi'' in academia, and not just in North America, but in Britain and Australia as well. Credit: Tulane Public Relations/cc by 2.0

TAIPEI, Mar 10 2015 (IPS) - From Columbia University in New York to the University of Cambridge in Britain, college classrooms are picking up on the “cli-fi” genre of fiction, and cinema and academia is right behind them.

While authors are penning cli-fi novels — with movie scriptwriters creating cli-fi screenplays to try to sell to Hollywood — classrooms worldwide are now focusing attention of the rising genre of literature and cinema.

"Literary fiction has dreamed up many versions of the end of the world, but how is contemporary fiction dealing with the threat of climate change?" -- Prof. Jenny Bavidge

Jenny Bavidge at the University of Cambridge taught a class on cli-fi last summer at the Institute of Continuing Education there, and Darragh Martin is teaching a cli-fi class at Columbia University in Manhattan this summer, too.

Cli-fi is a catchy abbreviation for the genre of “climate fiction,” much in the same way that “sci-fi” is a nickname for “science fiction.” With news articles about the rise of cli-fi appearing in the New York Times and Time magazine last year, literature professors saw an opportune time to introduce cli-fi classes into the curriculum.

“Literary fiction has dreamed up many versions of the end of the world, but how is contemporary fiction dealing with the threat of climate change?” Bavidge asked students in her introduction to the class last summer. “This course will focus on works by contemporary authors, including Margaret Atwood and Ian McEwan, and ask whether ‘cli-fi’ imagines solutions as well as ends.

“As people living through this particular historical moment, we may want to ask how far [cli-fi] novels contribute to efforts to better understand our relationship with the planet and its ecosystems,” she wrote

One of my mentors in the world of sci-fi literature is the novelist David Brin.

I once asked him about how climate change themes have been influencing sci-fi novels and movies, and he told me by email: “Global warming and flooding were important in my 1989 novel ‘Earth,’ but they were earlier featured in the film ‘Soylent Green’ based on Harry Harrison’s novel ‘Make Room, Make Room!’”

Six U.S. colleges have set up cli-fi classes this year, with both undergrad and graduate level courses involved. And that’s just the tip of the iceberg. This year, 2015, is shaping up to be ”The Year of Cli-Fi” in academia, and not just in North America, but in Britain and Australia as well.

Several non-English speaking countries are also looking at cli-fi and how it impacts their own literary circles, including Brazil, Spain, Germany and France.

While six universities and colleges in the United States have taken up the call and are part of the new trend in higher education in 2015, the genre is reaching out worldwide to writers (and readers) across the globe. Cli-fi is not an American or British genre; it has become a global genre.

The Chronicle of Higher Education newspaper in Washington, D.C., which covers academic issues in a variety of subject areas, has assigned a staff reporter to look into the rise of cli fi in the academy as well, according to sources.

In addition to Martin’s summer class at Columbia, which starts on May 27, professors at Temple University in Philadelphia, the University of Oregon, Holyoke Community College, the State University of New York in Geneseo (SUNY Geneseo) and The University of Delaware are currently teaching cli-fi classes this semester, with a total of about 200 students nationwide enrolled.

It’s a beginning. And there’s more to come.

Academics writing in Spanish, Portuguese and Italian, among other world languages are putting out papers about cli-fi and planning classes in the genre at the universities where they teach.

There is, of course, a long and storied history of teaching sci-fi at colleges in North America and Britain, with several universities even setting up literature departments that specialise in sci-fi research. Now cli-fi is joining the global academic world and finding a room of its own there as well.

When I told Trobaugh that I planned to write an oped about her course, she replied: “Thank you for your interest in what we are doing this semester. Professor Winters and I thought we were onto something, and your email confirms our conviction that cli-fi is indeed on the rise, and this is the moment (as Macklemore says in the song) to catch the wave.”

Stephen Siperstein, a doctoral student at the University of Oregon, is also teaching a cli-fi literature class this semester, with his undergrad students posting weekly class blogs about what they are reading and how they are reacting to the new genre of fiction.

At Temple University, Ted Howell is teaching an undergraduate class titled “Cli-fi: Science Fiction, Climate Change, and Apocalypse” with about 30 students enrolled. They are also keeping weekly blogs about the course, using them to interact online outside of class with their professor and fellow students.

”Representative works will include Paolo Bacigalupi’s ‘The Windup Girl,’ Barbara Kingsolver’s ‘Flight Behavior,’ and other novels,” Cooper told his students by way of introduction, adding mischievously: “There will be at least one zombie apocalypse, too.”

Siohban Carroll at the University of Delaware is a specialist in 19th century British literature, and told me in a recent Tweet: “I’m teaching a 19th Century ‘cli-fi’ class right now at the graduate level. One segment is on Mary Shelley and the Anthropocene.”

So there you have it. Cli-fi has reached into academia and found partners on college campuses. It’s a worldwide trend because global warming impacts us all, and literature and cinema always respond to the things that matter.