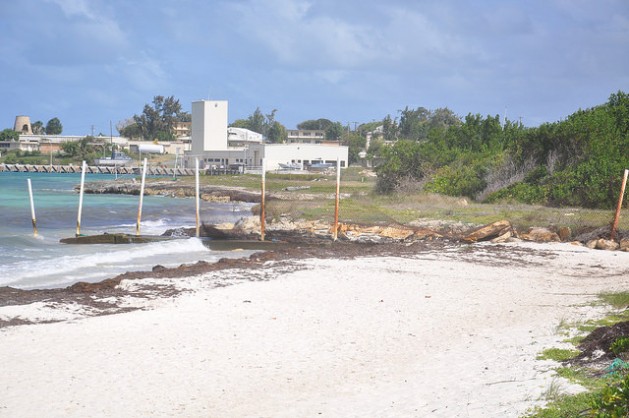 A section of Jabberwock beach, located on the northeastern coast of Antigua, that is being eroded by the sea. Credit: Desmond Brown/IPS

ST. JOHN’S, Antigua, Apr 15 2015 (IPS) - Jabberwock beach, located on the northeastern coast of Antigua, features a mile-long white sand beach and is a favourite with locals and visitors alike.

But Freeston Williams, a resident who frequents the area for exercise and other recreational activities, is worried that the beach is quickly disappearing.

"We believe that there is always a point of redemption and I don’t think we’ve gone beyond that point.” -- Barbuda’s chief environment officer Diann Black-Layne

“I travel around the Jabberwock area on the northern side of the island and I notice the shoreline is coming in closer to the road which means that it’s minimising the area we use for exercise,” Williams told IPS.”I am not sure what exactly is causing all this but sooner or later we will not have any beach left.”

Antigua and Barbuda’s chief environment officer Diann Black-Layne said the sea level is in fact rising and she is mobilising legislators and residents of the small island-nation to become “climate ready” by implementing national activities on climate change.

“In the past 10 years we have experienced three droughts in Antigua. The temperature of the Caribbean Sea will have summer temperatures all the time. This means hurricane season will be all year round,” Black-Layne told IPS.

Pointing to the consequences of a two-degree C increase in global temperatures as outlined in the Intergovernmental Panel on Climate Change’s (IPCC) Fifth Assessment Report (AR5), Black-Layne said there would be disruption of livelihoods in low-lying coastal zones and small island developing states and other small islands, due to storm surges, coastal flooding, and sea-level rise.

“For persons living in the tropics it will just be too hot, every building will have to be air-conditioned – schools, churches, clinics, prisons,” she said.

“There would also be failure of infrastructure such as roads, seaports, airports and buildings; plants and animals, including humans, would die during periods of extreme heat; there will be a breakdown of agricultural systems resulting in food prices increasing; there will be insufficient access to drinking and irrigation water and reduced agricultural productivity; and tropical species of fish will move to cooler waters resulting in a reduction of fishing in the Caribbean.”

Tourism is the mainstay of the economy of Antigua and Barbuda and is the leading sector in terms of providing employment and creating foreign exchange. But the outlook for reefs in this tourism-dependent nation is also grim.

A policy target informed by science, two degrees C is the formally codified benchmark, the line in the sand by which nations have agreed to measure collective success in providing  generations to come with a secure climate future.

The IPCC said global average surface temperatures have risen about 0.85 degrees C since 1900 and cumulative emissions of CO2 largely determine global mean surface warming by the late 21st century and beyond. It finds that having a greater than 66 percent probability of keeping warming caused by CO2 emissions alone to below two degrees C requires limiting total further emissions to between 370-540 gigatonnes of carbon (GtC).

At current rates of CO2 emissions (about 9.5 GtC per year), the world will hurtle past the two C carbon budget in less than 50 years. And this conservatively assumes that emissions rates don’t continue on their current upward trajectory of 3 percent per year.

In a bid to increase awareness of climate change here, the Organisation of Eastern Caribbean States (OECS) is spearheading a two-day workshop Apr. 14-15 under its Rallying the Region to Action on Climate Change (RRACC) project, an initiative funded by the United States Agency for International Development (USAID).

An OECS official said participants are being updated on the current awareness levels on the island and will brainstorm to determine ways to increase the nation’s consciousness. Participants are drawn from the sectors most affected by climate change.

“It will specifically seek to discuss the climate ready campaign which is currently ongoing, including results of a Knowledge, Attitude and Practice (KAP) survey on climate change awareness in the OECS,” OECS Communication Specialist Tecla Fontenard told IPS.

“We have data that shows what levels of awareness people already have and where the gaps are and we also have data from Antigua. The workshop will also determine priorities for a communication action plan for Antigua that considers critical climate change issues in four major sectors – agriculture, tourism, marine and coastal as well as the water sector.”

Antigua and other countries in the OECS have a heightened vulnerability to many of the economic and environmental pressures that are emerging globally. This vulnerability, coupled with fragile natural and cultural assets and inherent social challenges, presents a special urgency to the sustainable development goals of the region.

Climate change, one of the most significant ongoing challenges to countries in the OECS, is forecast to have devastating environmental, social and economic consequences on OECS countries and Black-Layne said the administration of Prime Minister Gaston Browne will have to develop adaptation strategies, during the next two terms, in order to address several issues including sea level rise and salt water intruding below the island to affect all wells.

“A significant 100 percent of potable water will have to come from desalination, the conch industry will be damaged because of ocean acidification and fisher folk will have to adapt and move into other areas of work,” she said.

But Black-Layne said all is not lost.

“From the Environment Division perspective, when you hear the pronouncements and the predicted impacts of climate change on our country it’s not very encouraging. In fact it’s very depressing and the temptation would be to say what’s the point of doing what we’re doing,” she said.

“But we believe that there is always a point of redemption and I don’t think we’ve gone beyond that point.”