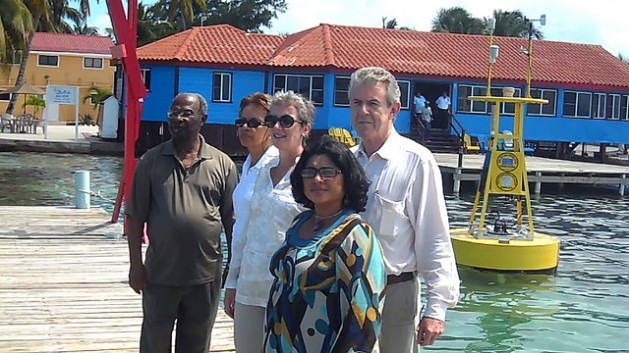 The humble CREWS buoy hosts several instruments designed to measure conditions above and below the water, and keep track of these developing threats. Credit: Aaron Humes/IPS

BELIZE CITY, Oct 20 2014 (IPS) - Home to the second longest barrier reef in the world and the largest in the Western Hemisphere, which provides jobs in fishing, tourism and other industries which feed the lifeblood of the economy, Belize has long been acutely aware of the need to protect its marine resources from both human and natural activities.

However, there has been a recent decline in the production and export of marine products including conch, lobster, and fish, even as tourism figures continue to increase.

“What happens on the land will eventually reach the sea, via our rivers." -- Dr. Kenrick Leslie

The decline is not helped by overfishing and the harvest of immature conch and lobster outside of the standard fishing season. But the primary reason for less conch and lobster in Belize’s waters, according to local experts, is excess ocean acidity which is making it difficult for popular crustacean species such as conch and lobster, which depend on their hard, spiny shells to survive, to grow and mature.

According to the executive director of the Caribbean Community Climate Change Center (CCCCC), Dr. Kenrick Leslie, acidification is as important and as detrimental to the sustainability of the Barrier Reef and the ocean generally as warming of the atmosphere and other factors generally associated with climate change.

Carbon dioxide which is emitted in the atmosphere from greenhouse gases is absorbed into the ocean as carbonic acid, which interacts with the calcium present in the shells of conch and lobster to form calcium carbonate, dissolving those shells and reducing their numbers. Belize also faces continuous difficulties with coral bleaching, which has attacked several key sections of the reef in recent years.

Dr. Leslie told IPS that activities on Belize’s terrestrial land mass are also contributing to the problems under Belize’s waters. “What happens on the land will eventually reach the sea, via our rivers,” he noted.

To fight these new problems, there is need for more research and accurate, up to the minute data.

Last month, the European Union (EU), as part of its Global Climate Change Alliance Caribbean Support Project handed over to the government of Belize and specifically the Ministry of Forestry, Fisheries and Sustainable Development for its continued usage a Coral Reef Early Warning System (CREWS) buoy based at South Water Caye off the Stann Creek District in southern Belize.

Developed by the U.S. National Oceanic and Atmospheric Administration (NOAA), it has been adopted by the CCCCC as a centrepiece of the effort to obtain reliable data as a basis for strategies for fighting climate change.

Dr. Leslie says the CREWS system represents a leap forward in research technology on climate change. The humble buoy hosts several instruments designed to measure conditions above and below the water, and keep track of these developing threats. The data collected on atmospheric and oceanic conditions such as oceanic turbidity, levels of carbon dioxide and other harmful elements and others are monitored from the Centre’s office in Belmopan and the data sent along to international scientists who can more concretely analyse it.

The South Water Caye CREWS station is one of two in Belize; the other is located at the University of Belize’s Environmental Research Institute (ERI) on Calabash Caye in the Turneffe Atoll range. Other stations are located in Jamaica, Barbados, Trinidad and Tobago, and the Dominican Republic, with more planned in other key areas.

According to the CEO of the Coastal Zone Management Authority and Institute (CZMAI), Vincent Gillet, this is an example of the kind of work that needs to be done to keep the coastal zone healthy and safeguard resources for Belize’s future generations.

A report released at the start of Coastal Awareness Week in Belize City urges greater awareness of the effects of climate change and the participation of the local managers of the coastal zone in a policy to combat those effects. Several recommendations were made, including empowering the Authority with more legislative heft, revising the land distribution policy and bringing more people into the discussion.

“We need to be a little more…conscious of climate change and the impacts that it has,” Gillett said. He added further that the Authority expects and has the government’s support in terms of facilitation, if not necessarily in needed finance.

The report was the work of over 30 local and international scientists who contributed to and prepared it.

In receiving the CREWS equipment, the Ministry’s CEO, Dr. Adele Catzim-Sanchez, sought to remind that the problem of climate change is real and unless it is addressed, Belizeans may be contributing to their own demise.

The European Union’s Ambassador to Belize, Paola Amadei, reported that the Union may soon be able to offer even more help with the planned negotiations in Paris, France, in 2015 for a global initiative on climate change, with emphasis on smaller states. Belize already benefits from separate but concurrent projects, the latter of which aims to give Belize a sustainable development plan and specific strategy to address climate change.

In addition, Dr. Leslie is pushing for even more monitoring equipment, including current metres to study the effect of terrestrial activity such as mining and construction material gathering as well as deforestation on the sea, where the residue of such activities inevitably ends up.