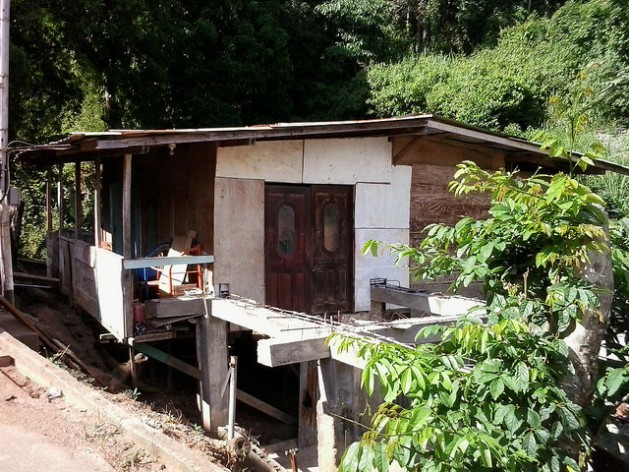 As natural disasters become more prevalent, squatter's homes, such as this one in Trinidad, are a cause for concern in Jamaica, where 20 percent of the population is said to inhabit such precarious structures. Credit: Jewel Fraser/IPS

PORT OF SPAIN, Trinidad, Aug 5 2014 (IPS) - Buildings are among the largest consumers of earth’s natural resources. According to the Sustainable Buildings and Climate Initiative, they use about 40 percent of global energy and 25 percent of global water, while emitting about a third of greenhouse gas emissions.

Anthony Clayton, a professor of sustainable development at the University of the West Indies, Jamaica, says those statistics make buildings vital to developing resilience to climate change and to reducing pockets of entrenched poverty in the Caribbean region.

"There is a disconnect between political agendas and climate change timelines." -- Dr. Kwame Emmanuel

“At the moment, most of the buildings in Jamaica are very energy inefficient with very expensive electricity that reduces the level of disposable incomes, which is one of the factors acting as a break on the economy.”

“If we build to a higher standard of energy efficiency,” the country will also be more resilient to climate change, he added.

Clayton and his colleague, Professor Tara Dasgupta, are currently working on the prototype of a smart building whose key features would be “optimal sustainability and efficiency” with particular attention given to water efficiency, renewable energies, materials and resources, and indoor environmental quality.

The proposed “net zero energy” building, which is the first of its kind in the region, is now in the design phase. The University of the West Indies’ Institute for Sustainable Development (ISD), where Clayton holds the Alcan chair, is working in collaboration with the Global Environment Facility and the United Nations Environment Programme (UNEP) on the seven-million-dollar research and building project.

Clayton, who is also a member of several advisory groups serving the Caribbean Regional Negotiating Machinery, the UNEP Division of Technology, Industry and Economics, and the Intergovernmental Panel on Climate Change, told IPS that a major hazard of the current housing stock in Jamaica, in light of climate change, is its proliferation of informal settlements.

He was referring to unregularised settling of vacant lands by squatters who throw up substandard housing for shelter.

He said 20 percent of the population in Jamaica is said to be living in these settlements. “We have got buildings built on unsuitable terrain and unstable slopes. If you get the kind of torrential rain associated with climate change, there is liable to be flooding or landslips.”

Many of these houses built by squatters are not particularly sturdy. “A lot of the houses are just basically built of block, some concrete, tin, timber, just patched together. Some are just wood and a corrugated tin roof,” he said.

A lot of work still needs to be done in Jamaica and the rest of the Caribbean with regard to establishing and enforcing building codes that provide some protection against natural disasters.

The first phase of that project was “a risk assessment of the housing stock and areas of urban development in Jamaica and… the draft[ing] of a parliamentary paper on environmental regulation.”

Among the findings of the risk assessment phase, said Dr. Kwame Emmanuel, technical consultant on the project, was that the government of Jamaica was partly to blame for Jamaica’s unsafe housing environment.

He told IPS, “The development control regime is encouraging illegal developments by enforcing a cumbersome and time-consuming process for formal developments.”

Further, “The government of Jamaica is currently pursuing a housing policy which seeks to increase the number of houses for low-income earners. One possible policy conflict is related to the location of these high-density housing developments.

“They may either be placed in vulnerable or environmentally sensitive areas because of the low cost of land; or the development may enhance the vulnerability of adjoining areas. In addition, climate resilience may not be considered in the design of the housing developments and units,” Emmanuel added.

Offering a possible explanation for the scenario, Emmanuel said, “There is a disconnect between political agendas and climate change timelines. Politicians are primarily concerned with current problems faced by the electorate such as poverty, cost of living, unemployment, water lock offs, poor road conditions and so on. Therefore, it is difficult for them to consider issues which have not fully manifested as yet, for example, sea level rise.”

He added that, in Jamaica, another major issue “is the autonomy of the Urban Development Corporation (UDC) and the Ministry of Housing, facilitated by their respective Acts. These Acts have influenced the inconsistency of development standards and the exploitation of loopholes in the regulatory framework.”

Subsequent to the risk assessment, proposals were developed for modifying current building codes in the region to ensure energy efficient and climate resilient buildings. These proposals are currently being shared with professionals in the construction industry, said Clayton, and the response has generally been positive.

The multidisciplinary group MODE is leading the review of the building codes on behalf of the ISD.

Project manager of the MODE-led review, architect Brian Bernal, told IPS the project “examines how building codes can be used as an avenue to promote, encourage, and enforce climate change resilient buildings on a national and regional scale.”

In an e-mail interview, he told IPS, “Robust and enforced building codes are highly effective in ensuring a better quality of building and, when employed in conjunction with ‘green’ building standards and/or practices, will significantly increase the functional resilience of our buildings.”

The group made the following proposals for improving the current building codes:

• Jamaica’s current 2009 National Building Code be adopted, enforced and updated;
• the International Green Construction Code be adopted since it “would [be] the least difficult to implement in the local code environment”;
• a local green building rating system be implemented, which involves “voluntary tools for rating the environmental performance of buildings that are typically verified by a third party, in order to achieve recognition for exemplary design and levels of conservation”;
• and incentives for green building be given.

Bernal said, “The main objective of building codes is to protect the health, safety and welfare of the building’s occupants.”