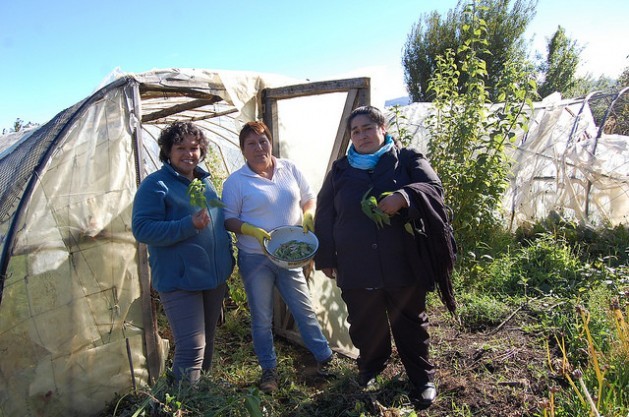 From left to right: Nancy Millar, Blanca Molina and Patricia Mancilla on Molina’s small farm near the town of Valle Simpson in the southern Chilean region of Aysén. The three women belong to the only rural women’s association in the Patagonia wilderness, which has empowered them and helped them gain economic autonomy. Credit: Marianela Jarroud/IPS

VALLE SIMPSON, Chile, Apr 17 2015 (IPS) - More than 100 women small farmers from Chile’s southern Patagonia region have joined together in a new association aimed at achieving economic autonomy and empowerment, in an area where machismo and gender inequality are the norm.

Patricia Mancilla, Nancy Millar and Blanca Molina spoke with IPS about the group’s history, and how the land, craft making and working together with other women helped them to overcome depression and situations of abuse, and to learn to trust again.

“We have at last obtained recognition of rural women,” said Mancilla, president of the Association of Peasant Women of Patagonia. “Peasant women have learned to appreciate themselves. Each one of our members has a history of pain that she has managed to ease through working and talking together.”

“We have learned to value ourselves as women and to value our work, thanks to which our members have been able to send their children to university,” added Mancilla, the head of the association created in 2005.

Mancilla lives on a small family farm in Río Paloma, 53 km from Coyhaique, the capital of the southern Chilean region of Aysén. Her house doesn’t have electricity, but thanks to a generator she produces what she most likes to make: homemade cheese from cow’s milk.

She is also exploring the idea of family agrotourism, although thyroid cancer has forced her to slow down.

In her three years as the head of the association, she has worked tirelessly to build it up and organise the collective activities of the nearly 120 members.

Mancilla and the other members are proudly waiting for the inauguration of the Aysén Rural Women’s Management Centre in a house that they are fixing up, which they obtained through a project of the regional government, carried out by the Housing and Urban Development Service.

The centre will serve as a meeting place, where the women can share their experiences, learn and receive training, and as a store where they can display and sell their products. The members of the association hold a weekly fair on Wednesdays, where they sell what they produce. 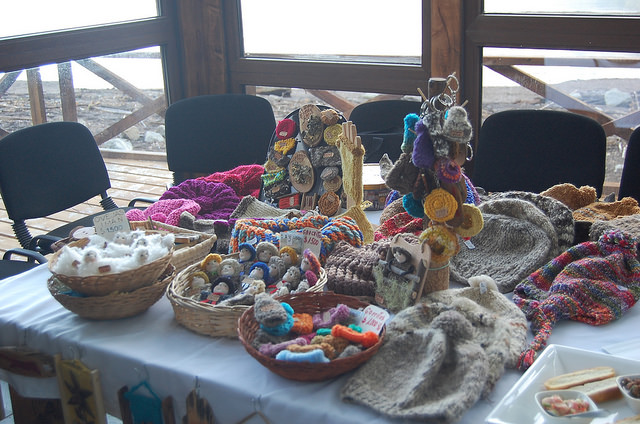 The craftswomen who belong to the Association of Peasant Women of Patagonia in southern Chile are eagerly awaiting the opening of their own community centre, where they will exhibit and sell their products. Meanwhile they sell them in public fairs and the locales of other women’s organisations in the Aysén region. Credit: Marianela Jarroud/IPS

The southern region of Aysén is one of the least densely populated in Chile, home to just 105,000 of the country’s 17.5 million people. It is a wilderness area of great biodiversity, cold, snowy winters, swift-running rivers, innumerable lakes, fertile land and abundant marine resources.

Patagonia covers 1.06 million square kilometres at the southern tip of the Americas; 75 percent of it is in Argentina and the rest in Aysén and the southernmost Chilean region of Magallanes.

It is a region of diverse ecosystems and numerous species of flora and fauna, some of which have not yet even been identified. It is also the last refuge of the highly endangered “huemul” or south Andean deer.

And according to environmental experts it is one of the planet’s biggest freshwater reserves.

Behind its stunning landscapes, Aysén, whose capital is located 1,629 km south of Santiago, conceals one of the country’s poorest areas, where 10 percent of the population lives in poverty and 4.2 percent in extreme poverty.

Patagonian activists are seeking to make the region a self-sustaining life reserve.

“We want what we have to be taken care of, and for only what is produced in our region to be sold,” said Mancilla. “There are other pretty places, but nothing compares to the nature in our region.

“We still eat free-roaming chickens, natural eggs; all of the vegetables and fruit in our region are natural, grown without chemicals,” she said.

Farmers like Molina grow organic produce, using their own waste as fertiliser. The association is the only organisation of rural women from Chile’s Patagonia region to sell only ecologically sustainable products. 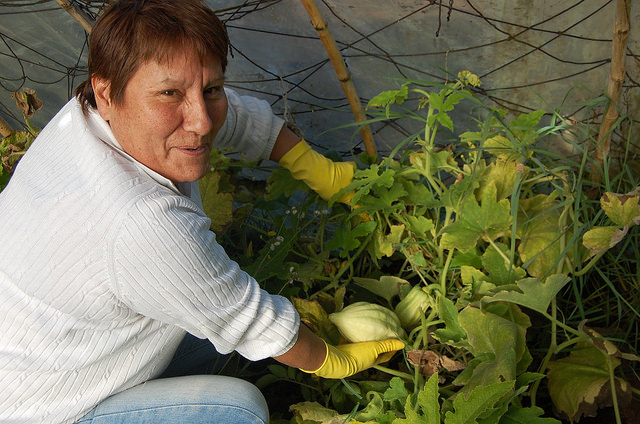 Blanca Molina proudly holds up a young squash, grown organically in one of the four greenhouses she built with her own hands on her small family farm in Villa Simpson, 20 km from Coyhaique, the capital of the Aysén region in the Patagonian wilderness in southern Chile. Credit: Marianela Jarroud /IPS

“Some say this isn’t good land for planting, but I know it’s fertile,” said Molina. “I’m always innovating, planting things to see how they grow. Thank god that everything grows well in this soil. I’ve found that out for myself and I can demonstrate it,” she said, pointing to her crops.

With her own hands she built four greenhouses that cover a large part of her land in Valle Simpson, 20 km from Coyhaique.

She points one by one to the fruits of her labour: pumpkins, artichokes, cucumbers, cabbage and even black-seed squash, not commonly grown in such cold regions.

She said the land fills her with life, and especially now, as she tries to pull out of the deep depression that the death of two of her children plunged her into – a tragedy she prefers not to discuss.

“It’s the land that has pulled her up,” said Mancilla, smiling at Molina standing by her side.

Despite the traditional machismo, women in Patagonia have always had to shoulder the burden of growing and managing their family’s food, taking care of the livestock, tending the vegetable garden and fruit trees, chopping wood, running rural tourism activities, and making crafts, besides their childcare and household tasks.

“Patagonian women had to give birth without hospitals, they had to raise their children when this was an inhospitable territory, but they also managed the social organisation in the new communities that emerged here,” social activist Claudia Torres told IPS.

“The men worked with the livestock or timber, and left home twice a year for four or five months at a time. So women got used to managing on their own and not depending on their men, in case they didn’t come back.”

Despite that central role played by women, “when government officials would go to the countryside, they would always talk to the men,” Patricia Mancilla said.

“They didn’t understand that behind them were the women, who were key to the success of production,” she added.

The look on the faces of these three women, all of them married and with children of different ages, changes as they walk around their land, where wonderful aromas arise from their crops in the plots surrounded by the Patagonian hills.

They have known each other since they and another small group of women founded the association over a decade ago, with support from the Programme for the Training of Peasant Women, backed by an agreement between the Institute of Agricultural Development and the Foundation for the Promotion and Development of Women, two government institutions.

The programme, created in 1992, has the aim of supporting women from smallholder families, to help boost their income by means of economic and productive activities in rural areas. So far, 20,000 women have benefited from the programme.

Molina said that with the help of the programme, “women now have more rights and bring in their own incomes to help put food on the table.”

Millar, who makes crafts in wool, leather and wood in Ñirehuao, 80 km from Coyhaique, concurred. “Rural women have been empowered and are learning their rights,” she said.

The three agreed that Aysén is a region where machismo or sexism has historically been very strong. “That’s still true today, but we are gradually conquering it,” Mancilla said.

They said they ran into the strongest resistance to their association, in fact, inside their homes.

“In the great majority of our cases, (our husbands) would quip ‘so you’re leaving the house?’ and when we would return they would say ‘what were you doing? Just wasting time’,” Mancilla said.

But despite the initial resistance, their husbands are now proud of them, because they see what their wives have achieved. “Now they accompany us – especially when we roast a calf,” one of the three women said with a laugh.

The challenge they are now facing “is to have a hectare of our own, for the organisation, to do the training there, and to buy a truck so we can easily go to the local markets and be available when women need a ride, especially the older women,” Mancilla said.

But there is a bigger challenge: to gain their own water rights so they don’t have to depend on a company to obtain the water they need.

Chile’s Water Code was put into effect by the military dictatorship of Augusto Pinochet (1973-1990). It made water private property, giving the state the authority to grant water use rights to companies, free of charge and in perpetuity.

It also allows water use rights to be bought, sold or leased, without taking use priorities into consideration.

“Why should we pay for water rights if people were born and raised in the countryside and always had access to water?” asked Mancilla. “Why should small farmers pay more taxes?”

The women said that each member throws everything into their products.

“Everything we do, we do with love: if we make cheese, we do it with the greatest of care; you want it to be good because your income depends on it. Nancy’s woven goods, Blanca’s vegetables – we do it all with passion,” she said.