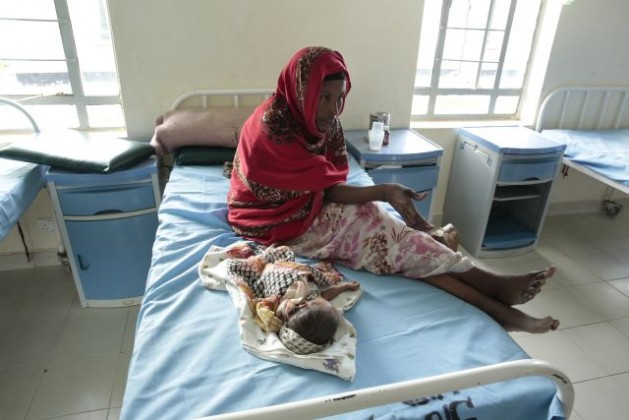 A new mother watches over her child at the Ifo 2 Refugee Camp Hospital in Dadaab, Kenya, which is supported by the United Nations High Commissioner for Refugees (UNHCR). Credit: UN Photo/Evan Schneider

The report states that global forced displacement reached unprecedented levels in 2014, with 59.5 million people fleeing their homes worldwide. An estimated 13.9 million individuals were newly displaced due to conflict or persecution.

High Commissioner for Refugees Antonio Guterres noted in a statement accompanying the report, “For an age of unprecedented mass displacement, we need an unprecedented humanitarian response and a renewed global commitment to tolerance and protection for people fleeing conflict and persecution.”

Syria became the leading country of origin of refugees in 2014, with 95 per cent of those fleeing the country for surrounding nations. Turkey, for the first time, became the largest hosting country worldwide, with 1.59 million refugees. One million Syrians registered there in 2014.

Many Syrian refugees fled to Lebanon in 2014, where at the end of the year almost one in four inhabitants was a refugee. In April, Guterres noted that the numbers of refugees Lebanon has absorbed would be unthinkable in most Western countries.

“The equivalent of what we have in Lebanon in the United States would be more than 80 million refugees coming into the U.S.,” he said.

If the United Kingdom received the equivalent influx, it would have to accommodate more than 15 million refugees.

The report highlighted the heavy burden being shouldered by developing regions. Two decades ago, they were hosting about 70 per cent of the world’s refugees. By the end of 2014, this proportion had risen to 86 per cent – at 12.4 million persons, the highest figure in more than two decades.

The 30 countries with the largest number of refugees per one dollar GDP per capita were all members of developing regions. More than 5.9 million people, representing 42 per cent of the world’s refugees, resided in countries whose GDP per capita was below 5,000 dollars.

Rising numbers have stretched resources to the limit, with the World Food Programme suffering acute shortfalls in funding, leaving it unable to feed refugees in desperate need of support.

Executive Director of the U.N. World Food Programme Ertharin Cousin released a statement Thursday saying, “South Sudan is on the verge of a hunger catastrophe, violence is worsening in Iraq and Syria, and there are new trouble-spots in Yemen and Nigeria. Needs increasingly outpace resources and this poses a moral and financial challenge to the international community.”

Data indicate that the number of unaccompanied or separated children seeking asylum has reached levels unprecedented since at least 2006, when UNHCR started systematically collecting data of that kind.