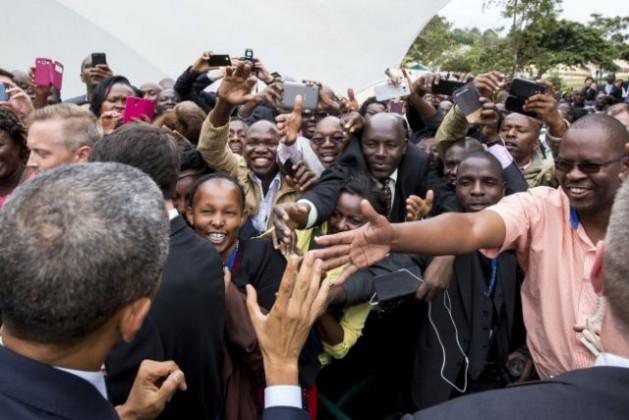 President Barack Obama greets embassy staff and their families during a meet and greet at the U.S. Embassy in Nairobi, Kenya, July 25, 2015, before going to Addis Ababa. Credit: Official White House Photo by Pete Souza

ADDIS ABABA, Jul 28 2015 (IPS) - U.S. President Barack Obama, in a meeting with regional African leaders, threatened new sanctions for the warring factions in South Sudan if a peace deal is not be reached by Aug. 17.

“The possibilities of renewed conflict … is something that requires urgent attention from all of us,” Obama said. “We don’t have a lot of time to wait.”

Pres. Obama outlined the options at a meeting Monday in Addis Ababa with leaders of Uganda, Kenya, Ethiopia, the chair of the African Union and the foreign minister of Sudan. “Liberating” South Sudan, with support from the U.S., Britain and Norway, was supposed to be the high point of Obama’s Africa policy. Four years after independence, the nation is a humanitarian disaster.

In fighting showing no signs of letting up, thousands of people have been killed and more than 2.2 million displaced, since violence erupted in December 2013, according to the U.N. Human rights abuses and indiscriminate killings have been carried out by both sides – namely the South Sudanese government led by President Salva Kiir, a Dinka, and forces loyal to former Vice President Riek Machar, an ethnic Nuer.

At the session of leaders, Obama set an Aug. 17 deadline for a peace agreement signed by all combatants although no consensus was reached on Monday on what to do if the deadline comes and goes. Numerous sanctions were floated – an arms embargo and the freezing of assets and ability to travel – backed by the international community. Obama expressed his preference for sanctions over intervention, as proposed by one of the leaders.

In a press briefing, a senior administration official told reporters that “venal leaders” had squandered a huge opportunity which the international community had helped them win. “So we can’t undo this for them,” he said, referring to the crisis. “They’ve got to fix this (themselves).”

Fighting has been fiercest in the Upper Nile and Unity States, where the nation’s two major oil fields are found. With the onset of the rainy season, an already dire situation has grown worse.

“Tens of thousands of people are cut off from aid and medical care as fighting intensifies in South Sudan’s Upper Nile State,” Doctors Without Borders, the international medical humanitarian organization, said in a statement last week.

Meanwhile, rebel spokesman James Gatdet welcomed Obama’s comments, saying “peace is possible”. But a spokesman for South Sudan rejected the plan and accused the international community of “jeopardizing the chances of the people of South Sudan.”