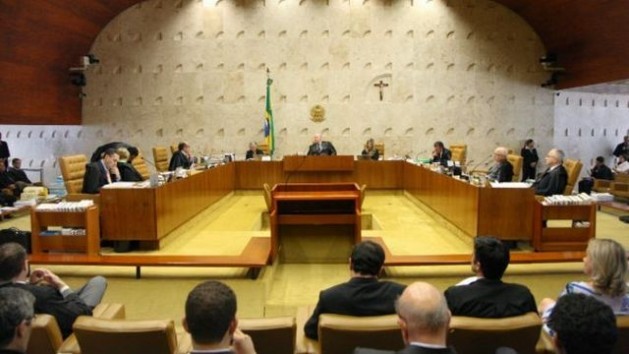 Brazil’s Supreme Court during the Sep. 17 reading of the landmark ruling which declared that laws allowing corporate donations to election campaigns are unconstitutional. Credit: STF

RIO DE JANEIRO, Sep 29 2015 (IPS) - From now on, elections in Brazil will be more democratic, without corporate interference, which had become decisive and corruptive. A Sep. 17 Supreme Court ruling declared unconstitutional articles of the elections act that allow corporate donations to election campaigns.

The 8-3 verdict came in response to a legal challenge brought by the Brazilian Bar Association (OAB) against the laws authorising and regulating donations by big corporations to political parties and candidates.

In its challenge to the constitutionality of the elections act articles in question, the OAB argued that they violate the democratic principle – the backbone of the 1988 constitution – which established that all citizens are political equals, with each individual vote carrying the same weight.

The verdict also stated that corporate financing runs counter to the first article of the constitution, which establishes that the political representatives elected by the people must serve the public good and that there must be a strict separation between the public and private spheres.

Citing academic studies, the OAB further asserted that corporate donations transfer economic inequality to the political sphere, negating democracy and tending towards a “plutocracy” or government by the rich.

Campaign donations from corporations give them undue influence over politics by putting candidates in their debt, bound to defend “the economic interests of their donors in the drafting of legislation, the design and execution of the budget, administrative regulation, public tenders and public procurement,” the OAB added.

Corruption is also a major factor in this promiscuous relationship between money and politics. And campaign financing is almost always an element present in political scandals.

“The legal door of donations was closed and the illegal route has become more difficult, after the scandals, imprisonment, and disqualification of many of the people implicated in the corruption, but they will look for loopholes in the law.” -- Fernando Lattman-Weltman

More than 30 politicians have been accused of receiving bribes from large construction and engineering firms in return for inflated contracts, and part of the funds allegedly financed candidates and political parties in election campaigns.

The ban on corporate donations will also lead to a reduction in gender imbalances in politics, sociologist Clara Araujo at the Rio de Janeiro State University (UERJ) told IPS.

Female candidates receive little campaign funding from their parties, but they are given larger proportions of donations from individuals than from companies, the opposite of male candidates, she said, based on the study “Women in the 2010 Elections”, which she co-authored, and on figures from 2014.

As a result of discrimination by political parties, reflected by underfunding and less advertising time, especially on TV, women are underrepresented in Congress, where they hold only 10 percent of seats in the lower house and 13.6 percent in the Senate, although they make up 52 percent of voters.

“The Supreme Court judgment is good news in the midst of the chaos of Brazil’s political crisis,” because it brings new balance to a game that was unfavourable to women, Guacira de Oliveira, one of the directors of the Feminist Centre of Studies and Advice (CFEMEA), told IPS.

But it has come at a moment of great uncertainty, when the crisis tends to have a greater impact on progressive political currents, and it will not change the rules that maintain inequality within and between the political parties.

Public resources, such as the official Party Fund, and radio and TV time for candidates will continue to benefit the big parties, since they are distributed proportionally to the number of seats held by each party, Oliveira lamented.

Only in-depth political reforms, called for by civil society organisations, could effectively democratise the election process. But the current legislature, where conservative lawmakers are a majority, would never approve that.

Far-reaching political reforms would require a constituent assembly to rewrite the constitution – which may become a possibility if the crisis gets worse.

But without corporate donations, “campaigns will suffer a sharp drop in funding, which means candidates and parties will have to cut costs. Internet and the social networks, which already had a growing participation in the elections, will become much more important,” said Fernando Lattman-Weltman, a professor of politics at the UERJ.

“But money will seek other ways to influence politics,” he added. “The legal door of donations was closed and the illegal route has become more difficult, after the scandals, imprisonment, and disqualification of many of the people implicated in the corruption, but they will look for loopholes in the law,” he told IPS. 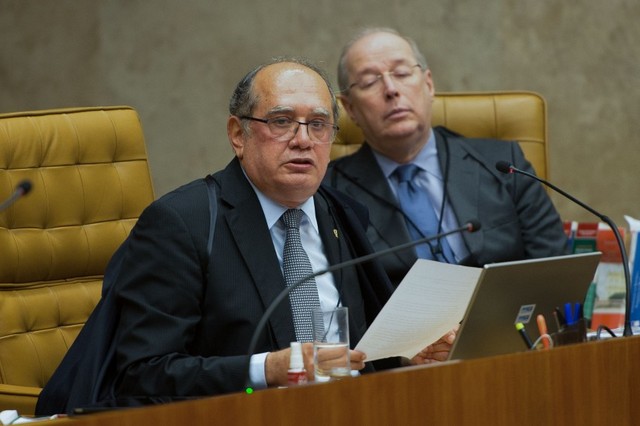 Gilmar Mendes (left), one of the three Supreme Court magistrates who voted against the ban on corporate funding for elections in Brazil. In April 2014 he successfully stalled for time, requesting a longer timeframe to analyse the issue, which enabled private companies to finance much of last year’s presidential election campaign. Credit: Fabio Rodrigues Pozzebom/Agência Brasil

Election campaigns have become expensive in Brazil in the last two decades, with the intense use of advertising techniques. Media advisers have become indispensable, and more and more costly to hire. Some have become celebrities, whose fame has transcended national borders.

After their triumphs in Brazil, they have been hired for tens of millions of dollars to head campaigns in other countries of Latin America, or in Africa.

Large campaign teams specialising in working the airwaves and the press have turned election campaigns into a media war between well-paid armies of advisers, following the U.S. model, with ongoing qualitative surveys providing guidance for speeches, slogans and TV ads and appearances.

Now candidates will have to return to the basics: personal speeches, direct public relations, street rallies and armies of volunteers, said Lattman-Weltman.

Without resources to produce and broadcast sophisticated ads, “candidates will try to seduce the media, trying to make them more biased and identified with specific parties,” like in the United States, he said, referring to dangerous side-effects of the new scenario.

Without the millions of dollars in donations from companies, the game will be less unequal, but candidates who already have power and are well-known by the public, like legislators, governors or other political leaders, will enjoy a big advantage over new candidates, Oliveira said.

That is a disadvantage faced by women in general, who began to participate in elections more recently, and who make up a small minority in the executive and legislative branches – even though one woman, Dilma Rousseff, has been president of this country of 202 million people since 2011.

Celebrities like TV hosts, actors and footballers, along with prominent trade unionists and social activists, will likely be the most sought-after by the parties.

The next elections, for mayors and city councilors in Brazil’s 5,570 municipalities, will be a test of how campaigns will work without legal and illegal donations from the big sponsors, especially in big cities like São Paulo and Rio de Janeiro.

Statistics from the Superior Electoral Court from 2010 and 2014, when presidential, state and legislative elections were held, point to “a strong correlation between the amount of spending and victory,” said Araujo.

So without a right to vote, companies had become a decisive factor in elections. In other words, “the big voter was money,” said Claudio Weber Abramo, director of the anti-corruption watchdog Transparency Brazil, in a statement reflected by the OAB in its successful legal challenge that led the Supreme Court to put an end to elections dominated by corporate financing.