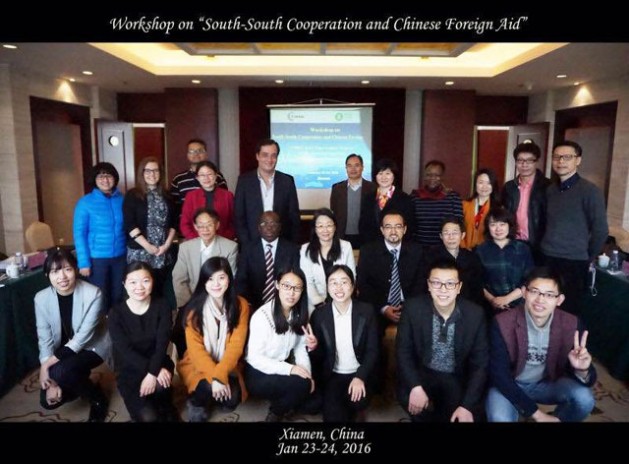 NEW DELHI, Feb 19 2016 (IPS) - China’s strength in South-South Cooperation (SSC) lies in its carrying out big-ticket infrastructure projects in diverse developing countries. It is remarkable in terms of project scale, speed and cost-effectiveness and has been playing a positive role in promoting partner’s nation-building, economic development and social progress. However, the swift completion of China’s infrastructure projects also has its sets of problems like little or no paper-work leading to lack of transparency, oversight and post-project monitoring. The backlash against Chinese labourers employed by Chinese companies in developing countries has been routinely highlighted by the international media with allegations of skirmishes with the local population, corruption coupled with resource theft.

Another important feature is the government-to-government and demand-driven nature of China’s SSC. However, this too has resulted in claims that it dispenses its development projects in partner countries at the behest of political elites rather than the general population. China is conscious of these accusations. It has taken active steps to mend its image and intends to adopt a more inclusive approach for its SSC. These include seeking social appraisal of their infrastructure projects, elucidation of outcomes and not just its output. Chinese projects not only aspire to create local jobs (output) but are also mindful of the nature of jobs (outcome) projects create for local residents in partner countries.

Other outcomes may include gender parity and pay parity of the workforce till the time the management of projects is in Chinese hands. Also, they now pay more emphasis on capacity-building and ‘direct aid’ (scholarships and fellowships), are now more forthcoming in working along with civil society organisations (CSOs) and they now focus on soft resource development. China encourages its state-owned firms to conduct social and environmental impact assessments and shoulder more social responsibility to enhance transparent management. They are now more open to coordinate with international stake-holders for carrying its development work in the global South.

Two cases in point are the coordination of Chinese humanitarian workers with the teams of multilateral humanitarian organisations in the aftermath of Cyclone Komen in Myanmar in 2015 and coordinated efforts of Chinese restoration experts with their French and Japanese counterparts in restoration projects of Ankor temples in Cambodia. Equality and mutual respect are the core values – when providing assistance, China adheres to the principles of non-interference in the internal matters of its partner, non-conditionality (both economic and political) and respecting partner’s right to independently choose their own paths and models of development.

China provides assistance to the best of its ability to other developing countries within the framework of SSC to support and help, especially the least developed countries (LDCs) to reduce poverty and improve livelihoods. For instance, the TAZARA Project, rail link between Dar-es-Salaam in Tanzania to Kapiri Mposhi (near Lusaka) in Zambia was constructed by China on demand by the leaders of the respective countries through a turn-key project worth US $500 million. The project was deemed financially unviable by Western lenders when Julius Nyerere of Tanzania approached the West to help reduce Zambia’s economic dependence on Rhodesia (now Zimbabwe) and South Africa (then apartheid-ridden) through this railway line.

At the China-Africa Forum Summit 2015, China identified five major pillars for bilateral cooperation in 10 major areas. These include consolidating political mutual trust, striving for win-win economic cooperation, enhancing exchanges, learning from each other’s cultures, helping each other in security, and cementing unity and coordination on international affairs. While the 10 sectors identified for priority cooperation are wide-ranging, they include the areas of industrialisation, agricultural modernisation, infrastructure, financial services, green development, trade and investment facilitation, poverty reduction, public health, people-to-people exchanges, and peace and security.

Chinese projects, especially in Africa and elsewhere, have been embroiled in different controversies and have attracted a bad press, internationally and locally. China has included justice, openness, inclusiveness and sustainability as new pillars and security and terrorism issues are the new sectors where China’s SSC is venturing for the first time. China, recently brokered reconciliatory talks between the Afghanistan government and the Taliban. Also, the proposed triangular development cooperation between China and France; and between China and UK for Africa’s development is a never-tried-before phenomenon and remains to be seen as to how it would pan out. This particular proposal was received with a lukewarm response from African leaders.

China’s strengths in SSC include prioritisation to aid payment and delivery over transparency and post-project monitoring. Financing for infrastructure projects is primarily done by China Exim Bank, which also provides concessional loans for infrastructure building and supporting the trade of Chinese goods. The China Exim bank is increasingly making use of a deal structure – known as the “Angola mode” or “resources for infrastructure” – whereby repayment of the loan for infrastructure development is made in terms of natural resources (for example, oil). On average, Chinese loans are offered at an interest rate of 3.6 per cent with a grace period of 4 years and a maturity of 12 years. Overall, this represents a grant element of around 36 per cent, which qualifies as concessional loan according to official definitions. However, the variation around all of these parameters is considerable across countries. The interest rate varies from 0.25 per cent to 6 per cent, grace period from 2 to 10 years, maturities from 5 to 25 years and overall grant element from 10 to 70 per cent.