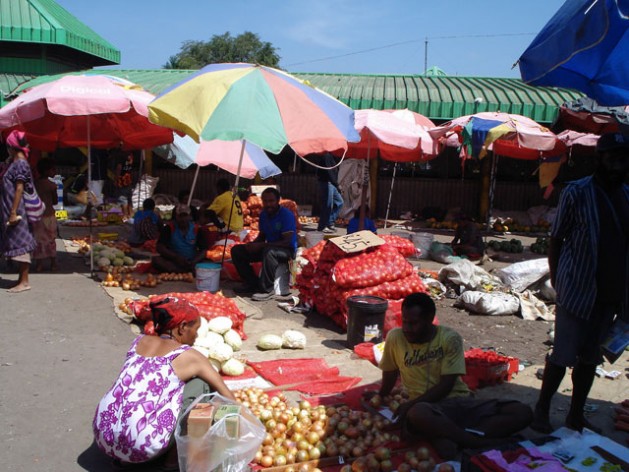 More than 80 per cent of Papua New Guinea's population is engaged in agriculture for subsistence and informal incomes. Credit: Catherine Wilson/IPS

CANBERRA, Australia, Feb 24 2016 (IPS) - Resource-rich Papua New Guinea (PNG) is seen as an economic powerhouse in the Pacific Islands with a state-led focus on resource extraction initially expected to drive one of the world’s highest growth rates of 15 per cent last year. But in the wake of falling commodity prices, GDP growth has plummeted from 8.5 per cent in 2014 to a forecasted 3 per cent this year. As the government faces a growing deficit between revenue and expenditure, exacerbated by high public debt, experts in the country believe greater efforts to diversify the economy are essential.

“The development of the SME (small and medium-sized enterprise) sector and agriculture sector is crucial to cushion the economy from falling prices,” economist, Busa Jeremiah Wenogo, in the capital, Port Moresby, told IPS, adding that “there is already consensus from some experts that lower commodity prices will require the government to diversify the economy to reduce its dependency on foreign dollars generated through its exports. However, we will have to wait and see how it all plays out.”

The concerns of Wenogo and Hetha Yawas, Chair of the Rural Women’s Empowerment Association, are for many citizens who struggle for a living outside the formal economy with poor access to infrastructure and services.

The southwest Pacific Island state has significant resources, including oil, gas, copper, gold, silver and timber, and the extractive industry has been worth about K150 billion (US$49.3 billion) since Independence in 1975. But corruption and low corporate taxes are among the causes of the discrepancy between extractive wealth and persistent hardship. Forty per cent of the country’s 7.3 million people live below the poverty line, 12 per cent have access to electricity and less than 5 per cent to formal sector employment.

In 2014 construction of the PNG LNG, the nation’s largest extractive project to date in the highlands region was completed. The Exxon-Mobil operated joint venture is expected to produce 6.9 million tonnes of liquefied natural gas (LNG) per year for export. Of the 21,220 workers employed on the project during its peak phase in 2012, an estimated 9,000 were Papua New Guinean.

But Yawas says the benefits for many families were temporary: “The little money that was given by husbands and other men in the family [who were employed] was used to buy store food for the family. However, that was short-lived and many mothers are now facing the reality of getting back to the basics of making traditional gardens to feed their families.”

Anticipated high revenues from the LNG project fuelled ambitious plans by the government to invest in infrastructure and services, such as an announcement in 2014 of K7 billion (US$2.3 billion) for road works over five years. But the price of Brent crude fell later that year from $76 per barrel to around $30 in January this year, while the natural gas index dropped from 101.6 to 58.8 in the same period.

National mining and petroleum tax revenues dropped last year from an initial estimate of K1.7 billion (US$559 million) to K300 million (US$98.6 million), triggering 20 per cent cuts in public spending on transport and education.

Developing non-mineral sectors is increasingly critical given finite mineral reserves, vulnerability of the economy to world price volatility and failure of the extractive industry to generate sufficient indigenous employment.

Agriculture is a clear choice for Wenogo, Yawas and Dr Odongo F Odhuno, senior research fellow in economic policy at the National Research Institute. Eighty per cent of the population with widespread access to customary land is already active in subsistence and semi-commercial agriculture. Ninety per cent of coffee production in Papua New Guinea, for instance, is produced by smallholders, involving an estimated 2.5 million people.

Wenogo also identifies the poultry industry as “among the biggest in PNG with a supply chain supporting tens of thousands of small poultry farmers in the informal economy.”

The government has stated its commitment to boosting the potential of agriculture and last year allocated around K141.3 million (US$46 million) to development of the sector and SMEs. But Wenogo claims that implementation remains a challenge and much more needs to be done to rehabilitate plantations, increase agriculture extension training and tackle constraints in the supply chain and value-addition.

Dr Jane Awi at the University of Goroka in Eastern Highlands Province also sees a bright future for the currently “under-developed” cultural industries.

“The creative or cultural industries is a sleeping giant which needs to be injected with adequate funding, appropriate infrastructure and good leadership…[it] has the potential to contribute immensely to the social wellbeing of people and boost economic development,” Awi claimed.

However, most people active in these sectors are informally employed and Wenogo says it is time that grassroots enterprise was recognized as a foundation upon which to build the private sector.

“When the government is considering stimulating growth of the SME sector, it cannot do that without first nurturing the informal economy, which is really at the elementary stage of the business cycle,” he elaborated.

Priorities include improving access to roads, affordable transport, electricity and the internet, particularly in rural areas where more than 80 per cent of people live.

“The cost of transport to go to the nearest market is often higher than what the mothers will get from selling their produce,” Yawas said. Rural women also need training in modern farming techniques, more incentives to start up small businesses and awareness about gender equality, she continued.

As the global economy remains fragile, local commentators consider a long-term investment in the human resources of this most populous of Pacific Island states vital to a more sustainable and equitable future.