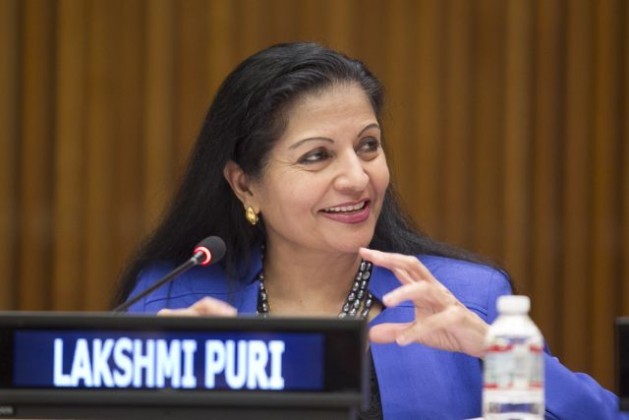 UNITED NATIONS, Feb 8 2016 (IPS) - Can you imagine an entire day without access to your mobile phone, laptop, or even to the internet? In our rapidly changing world, could you function without having technology at your fingertips?

Unfathomable for most of us, but across the world—especially for many in developing countries–using and accessing technology is not readily available, and certainly not a privileged choice. This is particularly true for women and girls.

In low- to middle-income countries, a woman is 21 per cent less likely to own a mobile phone than a man, and the divide is similar for Internet access. The possibilities of scientific and technological progress is almost limitless, yet women and girls are sorely missing in these fields, particularly as a creators and decision-makers in spheres that are transforming our everyday world.

In September 2015 the UN General Assembly declared 11 February the International Day for Women in Science. Coinciding with the adoption of the Sustainable Development Goals, or Agenda 2030, which are underpinned by science, technology and innovation (STI) and call for gender equality throughout, including under the standalone goal on gender equality, Goal 5, this Day has the potential to reverberate across the world.

Science and technology is not inherently elite, or about gadgets or toys. It is about our everyday. STI has the power to disrupt and shift trajectories as it increasingly influences all aspects of life today – from economic opportunity in STI sectors and the application of STI solutions within other productive sectors, including to help women grow business and social enterprise, to opportunity for greatly improving health outcomes (including sexual and reproductive health), energy, environment and natural resource management, and infrastructure development.

We see opportunity, particularly through information and communication technology, to enhance education, learning opportunities and skill development, for engagement with youth, for political participation and for women and girls to advocate for their interests, rights and social transformation.

Economic opportunities are abundant. The economic forecast in just a few STI sectors reveal staggering numbers. Estimates have shown that the value of climate change and clean technology sectors in the next decade amount to 6.4 trillion dollars, while the value of the digital economy in the G20 alone is 4.2 trillion dollars.

There is a huge opportunity gap in digitally skilled workers, amounting to 200 million workers, with estimates showing that up to 90% of formal sector jobs will require ICT skills. In energy and agriculture, 2.5 million engineers and technicians will be needed in sub-Saharan Africa alone to achieve improved access to clean water and sanitation.

Science and technology squarely underlie the enjoyment of human – and women’s – rights and are intrinsic to sustainable development, citizenship and personal empowerment. The SDG Gender Goal recognizes this reality by including a means of implementation indicator which directs the global community to “Enhance the use of enabling technology, in particular information and communications technology, to promote the empowerment of women.” (5b).

The ability of women to access, benefit from, develop and influence these sectors will directly impact whether we achieve our goals of Planet 50:50 by 2030. If women are left out of these 21st century revolutions, we will not achieve substantive gender equality.

The Financing for Development framework makes additional linkages between gender equality, women’s empowerment and science and technology. In establishing the Technology Mechanism – which will be guided by a High Level Panel, half of which are women – we have the opportunity to operationalize and promote learning and investment around these critical intersections.

The Commission on the Status of Women (2011, 2014) and the 20-year Review of the Beijing Platform for Action (2015) addressed this complex issue of girls and women in science and technology, and resulted in a series of recommendations on a path forward and needed investments. New, as well as established good practices were identified, but we face the urgent need to scale these success stories from all stakeholders and to connect ad hoc good approaches to each other to build more comprehensive pathways and solutions.

The 10 year review of the World Summit on the Information Society also resulted in increased commitments around gender equality and a role for UN Women. An Action Plan that synthesized priority gender and ICT commitments across a multitude of normative frameworks, including WSIS, was also presented to catalyze engagement of stakeholders. The urgent need for accelerated implementation of all of these commitments and recommendations cannot be understated.

Evidence shows, including in the recent World Bank Report on Digital Dividends, gains are not automatic. The number of women in STEM falls continuously from secondary school to university, laboratories, teaching, policy making and decision-making. There are great divides in women’s access to, participation and leadership within STI sectors, despite being on the frontlines of energy use, climate change adaptation, economic production, and holders of extensive traditional knowledge. In the formal sector of STI, women globally make up under 10 percent of those in innovation hubs and those receiving funding by venture capitalists, and only 5 percent of membership in national academies in science and technology disciplines.

There are similar low figures around women in research and development, publication, leadership in government and the private sector, and so on. The disconnect between women’s practical and regular interface with STI and their formal ability to take advantage of these sectors and in having their knowledge, perspectives and leadership valued is stark indeed.

The reasons for this disconnect are many, ranging from access to technology, to education and investment gaps, to unsupportive work environments, to cultural beliefs and stereotypes. Globally, girls start to self-select out of STEM courses in early secondary school. Societal attitudes and bias hinder girls’ participation, with science and technology often considered male domains.

But change is coming, slowly but steadily. On the ground, UN Women is working to further women and girl’s engagement in the field, with many programmes focused on leveraging the power of ICTs. We are running digital literacy and ICT skill development initiatives in countries including Jordan, Guatemala and Afghanistan, and we are supporting mobile payment and information systems for farmers and women in small business in Papua New Guinea and East Africa.

UN Women has also been supporting the development of mobile apps and games to raise awareness of violence against women and to support survivors in Brazil and South Africa. We have partnered with the International Telecommunications Union to launch a new global technology award that recognizes outstanding contributions from women and men in leveraging the potential of information technology to promote gender equality. At the policy level, we are engaged globally and nationally to promote girls and women in STEM.

On the International Day of Women and Girls in Science we must not only celebrate women’s incredible achievements in science, technology and innovation, but also galvanize the global community to do more to ensure that women’s participation in the formal sector is not the exception but becomes the rule, while in the informal sector where women’s ingenuity is the rule, that they are given recognition and support.

The International Day for Women in Science serves as an annual reminder and hold us to account on how we are advancing women in science, technology and innovation more broadly and critically for achieving gender equality and ultimately, all other development goals.