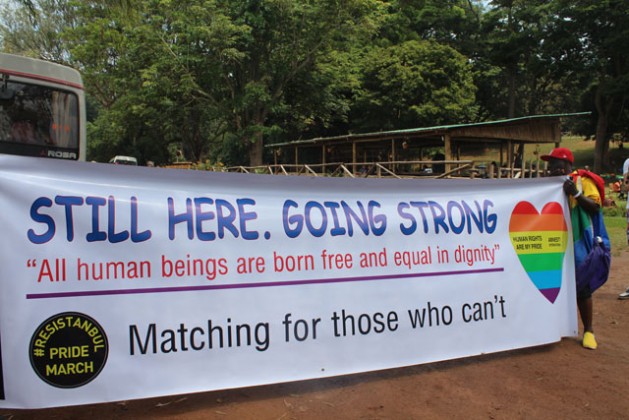 An activist from Uganda's gay pride march in Entebbe in 2013. Credit: Amy Fallon/IPS

KAMPALA, Uganda, Mar 9 2016 (IPS) - Nearly two weeks after controversially winning a fifth term, it has emerged that Uganda’s President Yoweri Museveni has signed another repressive law which restricts the operations of thousands of NGOs working in the country.

The veteran leader signed the NGO Act 2016, which rights groups stress contains “special obligations provisions which are vague and undefined, thus prone to abuse” on January 30, according to a copy of the law seen by IPS. The new legislation states that it is aimed at providing “a conducive and an enabling environment” for the NGO sector, and to “strengthen and promote the capacity of NGOs and their mutual partnership with the government”.

But Adrian Juuko, executive director of Ugandan NGO Human Rights Awareness and Promotion Forum (HRAPF), said activists were worried about provisions that will prohibit an estimated 11,000 NGOs from doing anything that is against “the interests of Uganda” and the “dignity of Ugandans”.

“The use of the term ‘dignity’ threatens organisations working on lesbian, gay, bisexual, transgender and intersex (LGBTI) issues,” Juuko told IPS, stressing this clause could suggest that Uganda “would rather maintain its dignity than accept homosexuality”.

He said the passage of the legislation “may be another way of reintroducing the nullified Anti-Homosexuality Act as it would equally affect organisations providing services to LGBTI persons or advocating for decriminalisation of same sex relations.”

The anti-gay law was passed by the Parliament of Uganda on December 20, 2013 with life in prison substituted for the death penalty. The bill was signed into law by Museveni on 25 February, 2014 but the Constitutional Court of Uganda ruled the Act invalid on procedural grounds six months later.

According to a July report by HRAPF, there were 89 cases of violence against gay people in 2014, and attacks and discrimination are continuing.

The NGO Act prescribes imprisonment of up to three years, a fine of up to 1, 440,000 Ugandan shillings (US$432) or both for what campaigners call “the vague offences”. It provides for jail of up to one year for denying access, refusing, or failing to comply with any order or direction of an inspector from an NGO Bureau.

The law was passed by Parliament last November, but activists had campaigned for what they claim are the tough provisions to be amended when it was introduced in April.

Museveni, who has ruled the east African country for 30 years, was re-elected in the February 18 election which the opposition has rejected as a “sham” and international observers have criticised for what they alleged was lack of transparency.

The assent to the law by the President “signals tough times” for NGOs in Museveni’s next term, and is the “byproduct of a prolonged stay in power which births paranoia and revulsion towards those critical of the state”, said Nicholas Opiyo, executive director of Ugandan civil liberties group Chapter Four.

He said the law promotes “the erroneous view of the sector as a security threat rather than a development sector”, adding under it NGOs required a state-issued permit.

“Passage of this flawed bill into law could not come at a worse time,” Asia Russell, executive director of Health Global Access Project, told IPS, adding that “Government threats, harassment and intimidation against Ugandan civil society, media, and the opposition is intensifying. In the immediate aftermath of widely criticised elections, President Museveni is throwing fuel on the fire.”

Now that the bill has been enacted, activists vow to take their frustrations with it to court, as they did with the Anti-Gay Act and the Anti-Pornography Act.

“Should government seek to enforce any of the problematic clauses, we shall challenge the legality of the section in the Constitutional court,” Anthony Masake, program assistant at Chapter Four, told IPS.

Uganda’s government did not respond when asked by IPS to comment on criticism of the new law. Museveni officially won the election with 60.62 per cent of the vote, followed by four-time presidential challenge Kizza Besigye on 35.61 per cent. Besigye, who remains under house arrest, has urged the international community to reject the results.

EU observers noted a “lack of transparency and independence of the Electoral Commission (EC)” during the elections, while Olusegun Obasanjo, who led the Commonwealth Observer Group in Uganda, said delays of up to six hours in delivering ballot papers to polling stations were “absolutely inexcusable and will not inspire trust and confidence in the system and the process”.

“There is no way anyone can genuinely believe that what was announced reflects the will of the people,” Dr Livingstone Sewanyana, the chair of the Citizens Election Observers Network Uganda (CEON-U), told IPS.

“We’ve made it clear that any aggrieved party that goes to court, we’re happy to support them with our information,” said Sewanyana, adding CEON-U was still collecting information from observers and would wind-up in June.

On February 29, women leaders from Uganda filed formal requests that the EC provide them with Declaration of Results Forms from all polling stations in a sub set of districts where either a substantial number of valid votes in the presidential election were excluded from the national tally or where there was almost 100 per cent voter turnout, with virtually all registered voter’s votes included in the national tally.

The votes from about 1,700 polling stations were excluded from the final national results announced by the EC on February 20 with no explanation, they said in a statement. EC chief Badru Kiggundu dismissed the concerns, saying criticism of elections was “not unusual”. “Observers all over the world have their freedom to say as they see, as they believe,” he told IPS.

Government spokesman Colonel Shaban Bantariza said Museveni had won “because many factors were legitimately and genuinely in his favour”.

“The chances of beating him are very slim,” he told IPS, accusing the chief of the EU Electoral Observation Mission to Uganda of failing to visit enough polling stations and then “sulking”.