Education vital for healthy, productive ecosystems. One of UNEP’s goals within an integrated ecosystem management framework is to foster the capacity of professionals and develop human capacity across all social strata and genders. Credit: UNEP

CAIRO, Apr 21 2016 (IPS) - “Africa’s human existence and development is under threat from the adverse impacts of climate change – its population, ecosystems and unique biodiversity will all be the major victims of global climate change.”

This is how clear the Nairobi-based United Nations Environment Programme (UNEP) is when it comes to assessing the negative impact of climate change on this continent of 54 countries with a combined population of over 1,200 billion inhabitants. “No continent will be struck as severely by the impacts of climate change as Africa.”

Other international organisations are similarly trenchant. For instance, the World Bank, basing on the Intergovernmental Panel on Climate Change (IPCC) reports, confirms that Africa is becoming the most exposed region in the world to the impacts of climate change.

In Sub-Saharan Africa, extreme weather will cause dry areas to become drier and wet areas wetter; agriculture yields will suffer from crop failures; and diseases will spread to new altitudes, say the World Bank experts, while alerting that by 2030 it is expected that 90 million more people in Africa will be exposed to malaria, “already the biggest killer in Sub-Saharan Africa.”

These and other dramatic conclusions are not new to the World Bank specialists. In fact, they alerted five years ago that the African continent has warmed about half a degree over the last century and the average annual temperature is likely to rise an average of 1.5-4°C by 2099, according to the most recent estimates from the IPCC.

Meanwhile, UNEP’s experts explain that, given its geographical position, the continent will be particularly vulnerable due to the “considerably limited adaptive capacity, exacerbated by widespread poverty and the existing low levels of development.”

What Is at Stake?

The facts are striking as mentioned in UNEP’ summary of the projected impacts of climate change in Africa. See UNEP’s fact sheet “Climate Change in Africa – What Is at Sake?”, which is based on excerpts from IPCC reports:

— By 2020, between 75 and 250 million people in Africa are projected to be exposed to increased water stress due to climate change.

— Agricultural production, including access to food, in many African countries is projected to be severely compromised. This would further adversely affect food security and exacerbate malnutrition.

— Towards the end of the 21st century, projected sea level rise will affect low-lying coastal areas with large populations.

— By 2080, an increase of 5 to 8 per cent of arid and semi-arid land in Africa is projected under a range of climate scenarios,

— The cost of adaptation could amount to at least 5 to 10% of Gross Domestic Product (GDP).

Temperatures: By 2050, average temperatures in Africa are predicted to increase by 1.5 to 3°C, and will continue further upwards beyond this time. Warming is very likely to be larger than the global annual mean warming throughout the continent and in all seasons, with drier subtropical regions warming more than the moister tropics.

Ecosystems: It is estimated that, by the 2080s, the proportion of arid and semi-arid lands in Africa is likely to increase by 5-8 per cent. Ecosystems are critical in Africa, contributing significantly to biodiversity and human well-being.

Mozambique: Investing in Environment Pays off for the Poorest. Communities look to protect ecosystems for livelihoods, following a disease that devastated their coconut plantations. Credit: UNEP

Between 25 and 40 per cent of mammal species in national parks in sub-Saharan Africa will become endangered. There is evidence that climate is modifying natural mountain ecosystems via complex interactions and feedbacks.

Rainfall: There will also be major changes in rainfall in terms of annual and seasonal trends, and extreme events of flood and drought.

Annual rainfall is likely to decrease in much of Mediterranean Africa and the northern Sahara, with a greater likelihood of decreasing rainfall as the Mediterranean coast is approached.

Droughts: By 2080, an increase of 5 to 8 per cent of arid and semi-arid land in Africa is projected under a range of climate scenarios. Droughts have become more common, especially in the tropics and subtropics, since the 1970s.

Human health, already compromised by a range of factors, could be further negatively impacted by climate change and climate variability, e.g., malaria in southern Africa and the East African highlands.

Water: By 2020, a population of between 75 and 250 million and 350-600 million by 2050, are projected to be exposed to increased water stress due to climate change. Climate change and variability are likely to impose additional pressures on water availability, water accessibility and water demand in Africa. 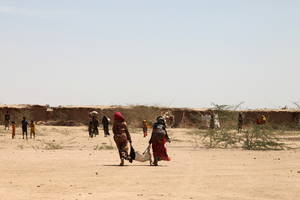 In Ethiopia, owners bring their livestock to sell for destocking purposes. El Niño impacts have made it necessary to reduce herd sizes. Credit: FAO

Agriculture: By 2020, in some countries, yields from rain-fed agriculture could be reduced by up to 50 per cent.

Agricultural production, including access to food, in many African countries is projected to be severely compromised. Projected reductions in yield in some countries could be as much as 50 per cent by 2020, and crop net revenues could fall by as much as 90 per cent by 2100, with small-scale farmers being the most affected.

Sea-level rise: Africa has close to 320 coastal cities –with more than 10,000 people– and an estimated population of 56 million people (2005 estimate) living in low elevation (10-m) coastal zones. Toward the end of the 21st century, projected sea level rise will affect low-lying coastal areas with large populations.

A Zimbabwean subsistence farmer holds a stunted maize cob in his field outside Harare. Credit: FAO

It explains that the increasingly unpredictable and erratic nature of weather systems on the continent have placed an extra burden on food security and rural livelihoods.

“Agriculture is expected to pay a significant cost of the damage caused by climate change.”

The agriculture sector is also likely to experience periods of prolonged droughts and /or floods during El- Nino events. And fisheries will be particularly affected due to changes in sea temperatures that could decrease trends in productivity by 50-60 per cent.