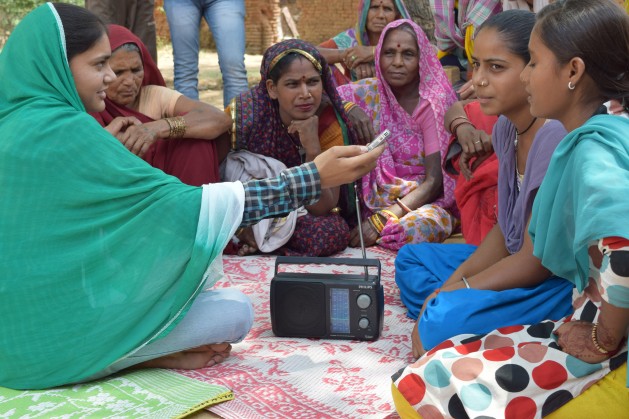 “You don’t even have to be in a conflict zone to be violated anymore,” New York Times reporter and author of the Taliban Shuffle Kim Barker said Wednesday at the launch of a new book documenting the daily violence and harassment which women journalists experience.

After writing an opinion-editorial on her experience of sexual harassment in the field, Barker said that an online commenter called her “fat” and “unattractive” and told her that “nobody would want to rape you.”

The New York-based Committee to Protect Journalists (CPJ) chose to focus its 2016 edition of the Attacks on the Press book series on the gender-based online harassment, sexual violence and physical assault experienced by women journalists, because of the impact of this violence on press freedom.

“In societies where women have to fight to have control over their own bodies, have to fight to reassert their right in the public space—being a woman journalist is almost a form of activism,” said Egyptian broadcast journalist Rawya Rageh who also spoke at the launch.

Much of the abuse takes place online where attackers can hide behind the anonymity of online comments.

“Our words, our will, can prevent the silencing of voices, the violation of our freedom of expression…and we, as journalists, have a huge responsibility in this regard." -- Jineth Bedoya Lima.

According to the Pew Research Center, 40 percent of Internet users have experienced some form of online harassment. Though men are also subject to harassment, online abuse towards women tends to be more severe, including sexual harassment and threats of violence.

For example, one journalist reported to the The International Women’s Media Foundation (IWMF) that a troll had threatened to “human flesh hunt” her.

Alessandria Masi, a Middle East correspondent for the International Business Times, recalled the comments she received in an essay in CPJ’s book: “I have been hacked by the Syrian Electronic Army for writing an article that was critical of Syrian President Bashar Assad and asked how many people I have to have sexual relations with to get my article published.”

Online abuse is a symptom of deep-seated and pervasive sexism, many note. University of Maryland Law Professor and Author of “Hate Crimes in Cyberspace” Danielle Keats Citron stated that online gender harassment “reinforce(s) gendered stereotypes” where men are perceived as dominant in the workplace while women are sexual objects who have no place in online spaces.

But the threats do not just stay online, they also often manifest in the real world.

Deputy Editor of a Colombian Newspaper Jineth Bedoya Lima was kidnapped and raped in 2000 after exposing an underground network of arms trafficking in the country.

In 2012, after reporting on the dangers of female genital mutilation, Liberian journalist Mae Azongo received death threats including that she will be caught and cut if she does not “shut up.” She was forced to go into hiding with her nine-year-old daughter.

A year later, Libyan journalist Khawlija al-Amami was shot at by gunmen who pulled up to her car. Though she survived, she later received a text message warning her to “stop your journalism” or be killed.

However, many do not report their cases.

“It was almost like this dirty little secret, you didn’t talk about it…because you had to seem like you were just like one of the guys,” Barker said. She pointed to Lara Logan’s case as the dividing point.

While covering the Egyptian Revolution for CBS, Logan was violently sexually assaulted by a mob of men. During an interview on “60 Minutes,” she described how she was pulled away from her crew, her clothes ripped off, beaten with sticks and raped.

When asked why she spoke out, Logan said that she wanted to break the silence “on what all of us have experienced but never talk about.”

One key reason that many journalists do not speak out is the fear of being pulled out of reporting because of their gender or sexual orientation.

“It’s a catch-22,” said Rageh to participants. “I don’t want to reinforce this idea of who I am or what I am is going to curtail my ability to cover the story, but of course there’s an issue that needs to be addressed,” she continued.

CPJ’s Vice Chair and Executive Editor of the Associated Press Kathleen Carroll noted that the threat of sexual violence has long kept women out of the field of journalism. But there are ways to handle such threats that do not lead to the exclusion of women, she said.

Carroll stated that good tools and training should be provided to journalists, both women and men alike. IWMF established a gender-specific security training, preparing women to be in hostile environments. This includes role-play scenarios, risk assessments and communication plans.

Panelists urged for reform, noting that women are needed in the field.

In an essay, Lima also reflected on the importance of women’s voices, stating: “Our words, our will, can prevent the silencing of voices, the violation of our freedom of expression…and we, as journalists, have a huge responsibility in this regard. Our words can stir a fight or bury the hope of change forever.”