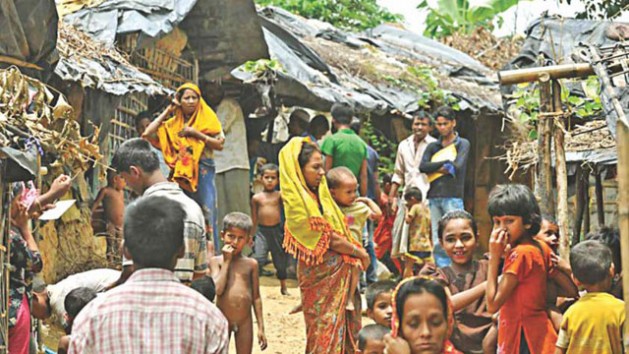 May 9 2016 - The Rohingyas are probably one of the only ethnic groups in the world whose existence is denied despite their presence. Although Rohingyas are one of the 136 ethnic groups in Myanmar, they have been most widely used as a political pawn in the country. While giving a glimpse of the history of the Rohingya issue, this article will also look at how Myanmar as a nation is thriving upon a flawed premise, thereby risking its image which the country only recently re-established in the international world after its return to democracy.

The death of more than 20 people in a boat accident in the Rakhine State and demonstrations by Ma Ba Tha – the anti-Rohingya nationalist Buddhist group – in front of the US embassy have once again brought the Rohingya crisis to the forefront. In response to the accident, the US embassy released a statement expressing its concern about the state of the Rohingya people. A peaceful resolution of the Rohingya crisis was expected under the new NLD government but so far there has been little to no change. The Rohingya crisis does not only impact the bilateral relations of Myanmar with other countries but also hampers the image of Myanmar as a state in the humanitarian world.

The entire debate centered on the Rohingya issue is confined to their citizenship status. The unique nature of Myanmar as a state has added some salt to this debate. The dominance of religion in national discourses sets Myanmar apart from the mainstream practices of other states. For example, Senior General Than Shwe declared that the Western concept of human rights and freedom is not compatible with the culture and tradition of Myanmar and that is why his country is very different in these matters. According to him, Myanmar is Burmese and consists of “one race, one language and one religion” (Gravers, 2013). It appears that this belief justifies Myanmar’s history of atrocities against the Rohingya who are not of the same race, language or religion.

Rohingyas constitute 1 percent of the total population, and 4 percent of the Arakan state population of Myanmar. Although they have become pawns in the game of colonial and post-colonial politics, according to Ragland (1994), they are “an ethnic, linguistic, and religious minority both within Burma and within their own province.” The word ‘Rohingya’ is an ethno-religious term which means Muslim people whose ancestral home is in Arakan. However, under the 1974 Emergency Immigration Act, and ultimately with the Citizen Act of 1982, the Rohingyas were denied citizenship of Myanmar.

According to Professor Imtiaz Ahmed, a group of historians and scholars suggests that Rohingya are the descendants of Moorish, Arab and Persian traders, including Moghul, Turk, Pathan and Bangali soldiers and migrants, who arrived between the 9th and 15th centuries. A smaller group claims that they are the descendants of the people of Chittagong. But a significant number of scholars agree that the history of Rohingyas ‘traces back to the early seventh century, when Arab Muslim traders settled in the area’. Arakan was an independent state, where in the 15th and 16th centuries a distinct Muslim community was formed. In 1784, the Burmese King Badaw Paya invaded and occupied Arakan and it became a part of Burma.

Although the seed of hatred between the Arakanese and Burmese grew during the colonial period, it was sparked during the immediate post-colonial era in Burma. In 1947, after the assassination of Aung Sun and his six cabinet ministers, U Nu became the new leader. During his government’s ten-year rule, Rohingyas were not given citizenship, and so eventually, some of them took up arms to establish their rights. They were pacified and managed by the government with the false promise of giving them citizenship and equal rights as with other ethnic groups.

Some Buddhist scholars like Aye Chan promote the belief of the majority Buddhists of the country that Rohingyas are illegal immigrants from Bangladesh and the term ‘Rohingya’ was only introduced after 1950. Chan contradicts himself in his paper titled, ‘The Development of a Muslim Enclave in Arakan (Rakhine) State of Burma (Myanmar)’. He notes that the British census included Muslims in some accounts as ‘Indians’ and in others as ‘Chittagonians’. He states, “History tells us that we do not have to go back very far”, thereby attempting to reject the history of Rohingyas living in Myanmar for hundreds of years. Anti-Rohingya scholarship claims that since there are similarities between the languages of Rohingyas and Chittagonians, it proves that Rohingyas originally hail from Bangladesh. But interestingly, like many others, a prominent Burmese lawyer and scholar Maung Zarni rejects these views and argues that Chittagong itself was a part of the old Arakan Kingdom, which explains the similarities in the language of people of these two communities. He also asserts that “many of them (Rohingyas) had resided in Myanmar for centuries with roots going back to the pre-colonial era.” After a robust analysis, this scholar claims that what is happening towards the Rohingya community in Myanmar can be called a ‘slow burning genocide’ and thus is punishable under established international law.

Therefore, it is clear that Myanmar has no reason or justification to deny the history and existence of Rohingyas as an ethnic race of its land. Then why does the hardline nationalist group continue to be so provocative against this community? After the victory of NLD, Ma Ba Tha was on the backfoot because of their declared support for the immediate past military government and their “nation building project”. However, since their election to power, Suu Kyi’s government has done nothing to solve this issue. They are instead planning to hear the views of all the ethnic groups (except Rohingyas) living in Myanmar. Ma Ba Tha, on the other hand, is trying to reposition themselves in the centre of Myanmar politics. This demonstration can also be seen as a new strategy of Ma Ba Tha to jeopardise Suu Kyi’s relations with the US, one of her strongest allies. Time will tell whether this group will trouble the new government or only worsen the plight of the downtrodden Rohingya community.

The writer is a development researcher and doctoral research fellow in Australia. Email: mithunmds07@gmail.com