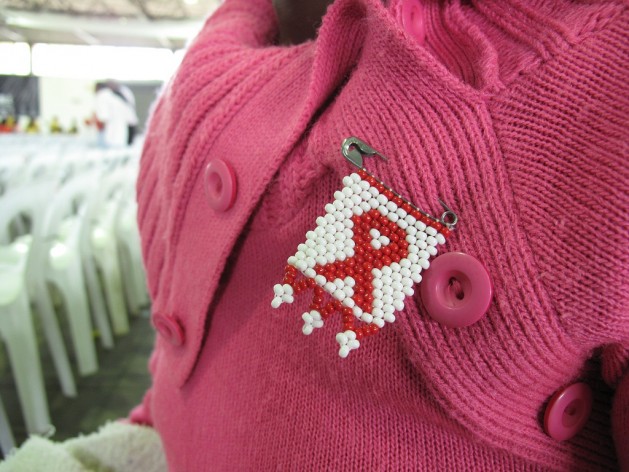 UNITED NATIONS, Jun 2 2016 (IPS) - When Lebogang Brenda Motsumi was 16  years old she fell pregnant, terrified about what her life would look like, she went to a backdoor clinic for an abortion.

The abortion failed, and she gave birth to a baby who later passed on.

Motsumi knew that she needed to be more careful so she went to a health clinic to get contraception and learn about prevention.

“Instead of supporting me the nurse interrogated me about why I was having sex, this discouraged me from ever going back,” she said.

Motsumi said that while she was afraid to go back to the clinic to get condoms, she was also “unsure to how to negotiate condom use with the men I was sleeping with.”

“I ended up having unprotected sex with him, which became the biggest mistake of my life,” she said.

Motsumi’s story of becoming infected with HIV while she was still a teenager is not unusual.

Often unable to decide whether their partners will wear condoms, young women in Sub-Saharan Africa are more than twice as likely as young men to contract HIV between the ages of 15 to 24.

In some countries, particularly in Southern Africa, young women are up to eight times more likely than young men to contract HIV.

Motsumi shared her experience during a meeting organised by the UN Population Fund (UNFPA) on increasing youth participation in the global response to HIV/AIDS.

“There is very good data that show that comprehensive sex education that does not explicitly address power relations and cycles of economic dependency is much less effective.” -- Judith Bruce, Population Council.

“For some time now in many countries the ratio of female to male infections has hovered between two or three to one, and in certain hotspots its been eight to one, female to male, for as much as 15 years,” Judith Bruce from the Population Council said at the meeting.

“It’s important that strategies actually reach these young excluded female populations,” said Bruce, explaining that in order to be effective the programs need to address the power imbalances, which mean that young women have little influence over the circumstances under which they have sex.

“There is very good data that show that comprehensive sex education that does not explicitly address power relations and cycles of economic dependency is much less effective,” she said.

“(Young women are) under tremendous social pressures and economic pressures, it’s not just a question of their making good decisions, they are in a very hard situation,” said Bruce, noting that young women were more likely to contract HIV from older partners than from boys their own age.

Young women are also much less likely to be able to access the services they need to prevent HIV infections because their movements and social interactions are much more restricted than young men’s, said Bruce.

She highlighted research that has shown that in some communities boys are allowed to walk six times as far as girls and are able to safely be outside for 16 hours every day, compared to only eight hours for girls in the same community.

This makes it much harder for young women to interact with other young women like themselves and to access the health and education services that they need, said Bruce.

Having access to appropriate services may have helped Motsumi.

“If I had been able to access youth friendly health services while growing up I would be a different person today,” she said.

“I believe that if I had received education that taught me about how safely to express my sexuality that it would have given me skills to negotiate condom use and understand what my rights are,” she said.

Motsumi said that there were many reasons young women were more vulnerable to sexually transmitted infections.

“More often than not men control the dynamics of when and how to have sex,” she said.

“Practices such as abuse and rape and other forms of violence play a large part in increasing women’s risk of HIV,” she said, while “poverty prevents poor women from controlling when sexual intercourse takes place and if a condom is used.”