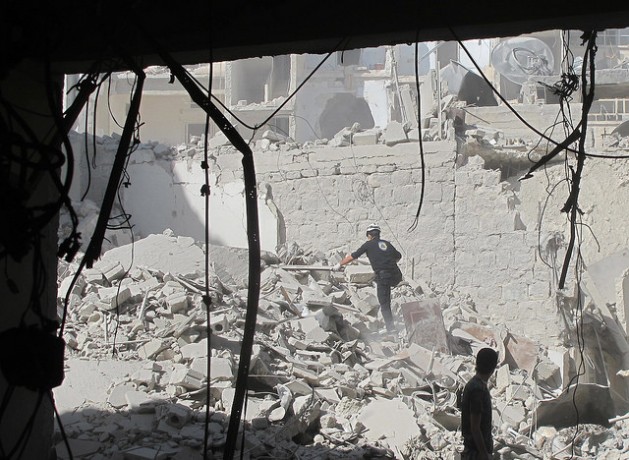 UNITED NATIONS, Aug 18 2016 (IPS) - Syria’s White Helmets – the volunteers who rescue civilians from collapsed buildings – could be the “most popular” nominee for the Nobel Peace Prize ever, according to human rights group, the Syria Campaign.

The nomination for the 2016 prize has received support from 133 organisations and individuals in Syria and around the world.

The Syria Campaign launched a website to build public support for the White Helmets’ nomination earlier this week.

It comes after a difficult week for the White Helmets, the collective of ordinary Syrians who have signed up to dig for hours on end to rescue civilians from the rubble of collapsed buildings.

Earlier this week, Khaled Omar Harrah, one of the best known White Helmets was killed during a rescue operation in Aleppo, Syria.

Harrah is the rescuer in the Miracle Baby’ video who spent 14 hours digging through cement to rescue baby Mahmoud when his three storey home was bombed in an airstrike and collapsed.

Mourning the loss of Khaled Omar. He saved countless lives, including the ‘miracle baby’. #sothatothersmaylive pic.twitter.com/k0MwAs08y4

Anna from the Syria Campaign described the day that Harrah rescued Mahmoud in a recent email to supporters.

“Khaled had laid down exhausted after nine hours of digging. The team didn’t think anyone else could have survived.”

“His head was on a pile of rubble when he heard a baby crying beneath.”

“Along with barrel bombs we’ve seen indiscriminate attacks with regular bombs, they’ve dropped sea-mines from helicopters and what we’ve been working on a lot lately is cluster munitions and incendiary weapons.” -- Ole Solvang, Human Rights Watch.

Harrah thought that he was imagining the baby’s cries, but his friend heard them too so Harrah continued digging for hours longer to reach Mahmoud and save his life.

Mahmoud is one of 60,000 Syrians that have been rescued by the White Helmets, whose official name is the Syrian Civil Defense Force.

“(The White Helmets) don’t want to join either of the fighting groups and instead they join the Syrian Civil Defense to do something useful, to do something meaningful,” Ole Solvang, Deputy Director of Emergencies at Human Rights Watch told IPS.

Solvang, who spoke to IPS after visiting the offices of the Syria Civil Defence earlier this week, noted that while the White Helmets are most well known for their search and rescue operations that is not all that they do.

“They’ve now started two teams operating to clear unexploded ordinance and most of that is cluster munitions.” Unexploded cluster munitions injure children and others who pick them up also posing danger to those who clear them.

Another important role that the White Helmets play is helping organisations like Human Rights Watch to document which weapons are being used in the Syrian conflict in which more than 250,000 people have lost their lives and millions more have been displaced. This has also prompted the Syria Civil Defense Force to call for the UN Security Council to ban the use of barrel bombs in Syria.

“It’s mostly Soviet-era Russian weapons that we are seeing,” he added.

“The strategy that we’ve seen increasingly of what’s called double taps you the aircraft will drop one bomb and then five or ten minutes later he comes back and does another run when the Syria Civil Defence or other people have come there to try to help other civilians or others out of the rubble,” said Solvang.

“Quite often it is those second strikes that end up killing and injuring more people because then there is a big gathering in those areas – and so it’s really hard to avoid drawing the conclusion that this is deliberate, that they are trying to take out the people who would rush to a scene like this.”

This is why the White Helmets have what is possibly the most dangerous job in the world.

“We were saddened and horrified by the report that Khaled Omar Harrah was killed in Aleppo,” Amanda Pitt Spokesperson for the UN Office for the Coordination of Humanitarian Affairs (OCHA) told IPS.

According to UN OCHA the “White Helmets represent the very best of what it means to be a humanitarian.”

The organisations supporting the White Helmet’s nomination include the Syrian Nonviolent Movement, the Union of Medical Care and Relief Organizations, Christian Aid and Islamic Relief UK.

The White Helmets have also received support from Jo Cox, the British Member of Parliament who was murdered earlier this year. Cox’ family chose the White Helmets as one of three causes that would receive funds from the outpouring of donations given in her memory.

The winner of the 2016 Nobel Peace Prize will be announced at the beginning of October. According to the Nobel Foundation, there were a record 376 candidates for the Peace Prize in 2016, however the foundation itself does not reveal or confirm the names of nominees, only the winner.