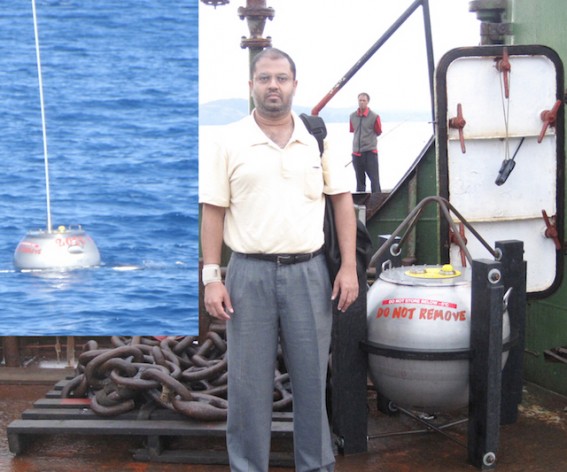 The ocean energy research team, including Dr Rafiuddin Ahmed, at the University of the South Pacific in Fiji have been using waverider buoys to conduct research into wave activity and its energy potential in the Pacific Islands region. Photo courtesy of Dr R Ahmed

CANBERRA, Australia, Sep 30 2016 (IPS) - Waves are ubiquitous in the more than 20 island states scattered across 165 million square kilometres of the Pacific Ocean. But only this year, following a ground-breaking study by oceanographic experts, are they now seen as an economically viable source of renewable energy in the region.

The significance of the wave energy cost analysis report recently released by the Pacific Community (SPC) is that it presents tangible costs of purchasing, installing, operating and maintaining wave energy devices in the region for the first time and concludes that “the costs of generating energy using waves are on par with other renewable energies, such as wind and solar.”

Dr Rafiuddin Ahmed of the Renewable Energy Group, University of the South Pacific (USP) in Fiji, agrees that ocean energy is an important alternative given “the cost of electricity generation in Pacific Island countries is currently very high, considering that most are dependent on imported fossil fuels.”

Yet today only 20 percent of households in the Pacific Islands region, home to more than 10 million people, have access to electricity. Hardship, including poor access to basic services, persists for many islanders with most of the 14 Pacific Island Forum countries not achieving Millennium Development Goal 1, the eradication of poverty.

Waves are formed when wind, as it traverses the ocean, transfers energy to the water.

However, sea conditions vary across the Pacific and optimum sites for pursuing wave energy, according to the report, lie south of latitude 20 degrees South. Specifically French Polynesia, Tonga, Cook Islands and New Caledonia benefit from exposure to the larger southern ocean swells.

The SPC study analysed the costs of using a Pelamis wave energy converter, which is typically installed 2-10 kilometres offshore and capable of meeting the annual electricity demand of about 500 homes.

Given the large numbers of Pacific Islanders who live along coastlines and the need for standalone power generation in rural communities, where the power deficit is greatest, “wave energy is certainly one of the strong candidates for powering remote islands,” Dr Ahmed said. In New Caledonia and Fiji only 45.5 percent of the rural population is electrified, declining to 17.8 percent in Vanuatu and 12.6 percent in the Solomon Islands.

Yet Associate Professor Anirudh Singh of the USP’s School of Engineering and Physics, who is also involved in Project DIREKT, the Small Developing Island Renewable Energy Knowledge and Technology Transfer Network, remains cautious about the report’s findings.

“The energy density available in waves is generally quite low in the Pacific compared, for instance, with the Northern Hemisphere countries and, secondly, despite all assurances to the contrary, the technology has still not been adequately market-tested,” Singh commented.

He continued that wave energy would be appropriate for rural coastal communities “once the technology of the single wave energy device has been perfected, but that will take some time.”

Work on ocean energy technology began in the 1970s, but most devices are yet to achieve commercial application, even though prototypes are being tested around the world. The Pelamis, which can produce grid-connected electricity, is only one of two wave energy devices to have reached commercial readiness, the report claims.

New concepts are also being evolved by the USP’s ocean energy research team, including a rectangular Oscillating Water Column (OWC) which channels bi-directional wave flow onto the blades of a Savonius rotor (wind turbine).

“An Oscillating Water Column (OWC) device can be constructed locally with local materials, except for the turbine. Its operation and maintenance costs are also low and it has a very long life. It will certainly compete with other renewable energy sources in locations of good potential,” Dr Ahmed claimed.

Sites with significant wave energy potential include Tonga’s main island of Tongatapu, the country’s capital, Nuku’alofa, and nearby Eua Island. The Tonga Government’s strategy to reduce the country’s dependence on fossil fuels includes the renewable options of landfill gas, wind and solar PV without storage. But, according to the country’s Energy Roadmap (2010-2020), ocean energy ‘could provide energy throughout the Tongan archipelago when proven cost effective technology becomes available.’

Numerous challenges will have to be overcome before the potential of ocean energy is transformed into reality, including lack of local technical expertise in renewable energies and securing private sector investment for the commercial scale up of the technology. Building investor confidence, according to the World Bank, also requires clarity from governments in the region on investment options, incentive schemes and associated policy, governance, legal and regulatory frameworks.

The SPC report’s recommendations are yet to be acted upon. But it is now clear that wave energy could play a key role in increasing people’s access to health, education and economic opportunities, particularly in rural coastal communities, and reduce the financial strain of expensive fossil fuels on small Pacific Island economies.