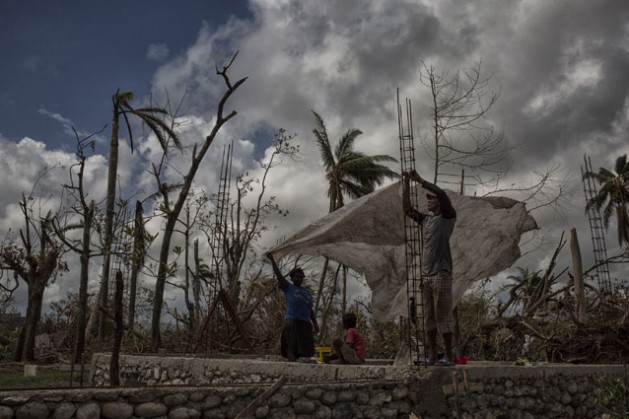 UNITED NATIONS, Oct 23 2016 (IPS) - As Haiti reels from another disaster once again, many are questioning the humanitarian system and looking for long-term solutions with Haitians at the heart of response.

Since Hurricane Matthew made landfall in early October, over 500 Haitians have reportedly died, thousands of homes have been left destroyed, and vital farm land overturned. This devastation has affected over 19 percent, or 2.2 million, of the Caribbean nation’s 10 million citizens. More than 12 percent of the population is in need of immediate assistance, especially in the southern part of the country.

In response, the United Nations launched a flash appeal of $119 million to provide urgent life-saving aid to 750,000 people in the next three months. This appeal is in addition to $194 million for the 2016 Haiti Humanitarian Response Plan (HRP) requested early this year.

Neighboring nations however did not experience such devastation, with only 4 deaths in the Dominican Republic and none in Cuba. So why did Haiti take such a hard hit?

“Fundamentally, the problem is that Haiti is very poor,” David Sanderson, a Professor at the University of New South Wales specialising in humanitarian responses told IPS.

Haiti, a nation formed following a slave rebellion, has long struggled with extreme poverty, after beginning its existence in debt to its former coloniser France. Meanwhile aid delivered to Haiti has often been criticised for being insufficient and inefficient and at times even counter-productive.

Haiti is the poorest country in the Western hemisphere with more than a quarter of its people living in extreme poverty. The United Nations International Strategy for Disaster Reduction found that poverty and disaster mortality often go hand in hand, reporting that the majority of the 1.35 million killed by natural disasters between 1996 and 2015 occurred in low-income countries.

“Haiti has become a Republic of NGOs—so international NGOs have created this complete parallel of government that always bypasses the Haitian government,” -- France Francois.

Many have also noted the impacts of decades of political instability and corruption in creating a weak government that has not enacted key disaster preparedness policies such as necessary improvements to infrastructure.

According to a report from the American Institute of Architects, there is no national building code and a lack of enforcement of building construction standards. Instead, engineers often use standards from other countries that do not account for Haiti’s own context.

The government was only weakened further following the devastating magnitude 7 earthquake in 2010 which claimed over 200,000 lives and left over 1.5 million people homeless. Now over six years after the earthquake, almost 60,000 people are still displaced.

A Byproduct of the International Development System

However, many are pushing back on this narrative, pointing to the international aid regime as a major source of the country’s inability to withstand and recover from such disasters.

“The weakness of the government is a byproduct of the entire international development system,” said France Francois, a former development worker in post-earthquake reconstruction efforts, to IPS.

“It’s easy to point the finger and say well the Haitian government should have done this or should have done that, but what you have to look at is the larger structure…It’s not simply because [the government doesn’t] want to do things, it is because they don’t have the capacity and they don’t have the capacity because they only get one percent of foreign aid,” Francois continued.

Haiti-American development consultant Jocelyn McCalla echoed similar sentiments to IPS, noting that the international aid regime has lead to very few assets being provided “in order to build the capacity of Haitians themselves to own the process of rebuilding.”

According to the UN Office of the Special Envoy for Haiti, the Haitian government received less than one percent of humanitarian aid after the 2010 earthquake while humanitarian agencies and international non-governmental organisations received the other 99 percent. Provisions for long-term recovery funding to the Government of Haiti was slightly higher at approximately 15 percent.

This failure to assist and coordinate with the government creates a “vicious cycle” in which Haitians are left relying on forces “outside of their control,” said Haiti-American development consultant Jocelyn McCalla to IPS.

“Haiti has become a Republic of NGOs—so international NGOs have created this complete parallel of government that always bypasses the Haitian government,” said Francois.

She also pointed to the disconnect between donor priorities and Haitians’ needs.

As part of efforts towards reconstruction after the 2010 earthquake, the Bush-Clinton Haiti Fund, created by former U.S. Presidents Bill Clinton and George W. Bush, invested $2 million in the Royal Oasis Hotel aimed to house aid workers and foreign investors.

Though the project was meant to create jobs for Haitians, it failed to address the permanent, seismic-proof housing needs of thousands of Haitians.

“If you asked the Haitian people…they would have said that [being] safe during a hurricane is a priority for them, not hotels for foreigners,” Francois told IPS.

The failure to focus on resilience and disaster preparedness is not isolated to Haiti. Sanderson, who is one of the editors of the 2016 World Disasters Report, found that only 40 cents to every $100 spent on development aid was invested in disaster risk reduction activities.

“That’s wrong—there should be way more going in advancement to stop disasters from happening in the first place,” Sanderson told IPS, adding that there is a shared responsibility towards such action.

As a result of past failures, many have said that greater transparency and accountability is “sorely needed.”

In response, the Red Cross denied allegations and called the misrepresentation “disappointing.”

“Despite the most challenging conditions, including changes in government, lack of land for housing, and civil unrest, our hardworking staff—90 percent of whom are Haitians—continue to meet the long-term needs of the Haitian people. While the pace of progress is never as fast as we would like, Haiti is better off today than it was five years ago,” Red Cross said in a statement.

Francois said that beneficiaries must hold organisations and donors accountable for aid flows, and that organisations must work with and involve communities in every step of the way.

“What I hope will happen is that those who want to support Haiti and the Haitian government will sit down with the proper authorities and put together what the long term sustainable plan will look like for this reconstruction effort,” she continued.

McCalla highlighted the need to ensure there is no repeat of the cholera epidemic that was introduced to the waterways following the 2010 earthquake.

UN peacekeepers have been blamed for the outbreak which has so far killed over 10,000 people. The US Centers for Disease Control and Prevention (CDC) found “an exact correlation” between arrival of Nepalese peacekeepers to the appearance of first cases in the Meille river. In August, a UN spokesperson said that the UN was convinced it needed to do more regarding its own involvement in the initial outbreak, however the UN has continued to claim immunity

“Because of a number of past failures, we should respond clearly and say we are accountable…we want to work with the Haitian people to do it…and also make every effort possible to commit to remedying the situation,” McCalla told IPS. However, no effort has been made thus far, he added.

Investing in Local Institutions and People

As the three week mark approaches along with the fading interest and relief resources that often goes with it, the push for long-term solutions is underway, one that gives control to Haitians.

“Business as usual is not an option,” said Sanderson, urging for a focus on long-term recovery that puts local citizens in charge.

McCalla and Francois made similar comments, highlighting the need to invest in Haitians.

“When you cast (Haitians) aside, and say we’re going to take care of everything…that is demeaning,” McCalla told IPS.

He also stressed the need to challenge the “charity” narrative of Haiti.

Francois said that organisations should hire and train Haitians not only as a way to build trust, but also to show their investment in communities.

“You build the local capacity so that you are no longer needed…you are supposed to grow and change and show results but only in the development world, remaining stagnant is something to be proud of,” she told IPS.

Though Haiti will continued to need funds, “people are not helpless,” McCalla told IPS, noting that many are already trying to rebuild their livelihoods and country whilst asserting their position at the forefront of disaster relief and recovery.

Ambassador of Haiti to the U.S. Paul Altidor released a statement at the wake of the disaster, urging for a coordinated and strategic relief effort “to avoid mistakes from the past.”

“As the country continues to assess the extent of the damage, the state of Haiti strongly encourages all who wish to help to work with the local organisations and institutions on the ground in order to gain their input on the actual needs of the affected communities,” he said in a statement, adding that local institutions can also be good partners too and should not be bypassed.