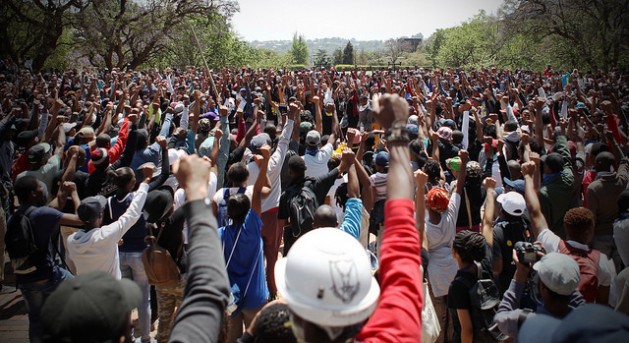 Hundreds of #FeesMustFall protesters gather outside the Union Buildings, the seat of government in South Africa, to demand free education on Oct. 20, 2016. Credit: Denvor DeWee/IPS

JOHANNESBURG, Oct 21 2016 (IPS) - When #FeesMustFall began to trend on social media platforms in South Africa in October 2015, government shrugged it off as an example of isolated hotheads, while political pundits predicted the student campaign wouldn’t last.

But a year later and the protest movement has gained traction across the country, with all major tertiary institutions partly shut down or barely functioning, and civil society warning that the effect on various sectors of the economy will carry over to 2017.

Black South Africans only account for around 25 percent of those studying at universities and the call for transformation underpins the Fees Must Fall movement.

In the latest action, hundreds of students marched to the Union Buildings on Thursday, Oct. 20, and called on government to take their complaints about the high cost of education seriously.

The University of the Witwatersrand student movement began in 2015 when students shut down the campus on the eve of exams after it was announced that fees would increase by 10.5 percent in 2016, citing the weak rand which lost a third of its value against the dollar in 2015 as one of the main reasons.

Since then protestors have taken aim at government as well as their local institutions and have called for action against the ruling African National Congress after its leaders told the country’s parliament this week that education could not be “a free for all”.

Posters emerged of students calling for the ruling party to “Fxxx Off” and the Higher Education Minister Blade Nzimande to be fired. Speaking to media on Oct. 14, Nzimande said government could not afford free education demands.

“In South Africa it is the taxpayers who give you money up-front and then say when you are working bring it back in order to assist others,” he said. “Somebody is paying… So we must understand these slogans properly.”

Students have rejected this view and mediation between the students and state by church and other NGO’s has failed so far. South Africa spends 5.4 percent of its 100-billion-dollar budget on education, and earlier in 2016 allocated an additional 1.1 billion for higher education over the next three years, with 400 million specifically aimed at keeping fees for tertiary institutions as low as possible. However, this has failed to address the students’ demands. 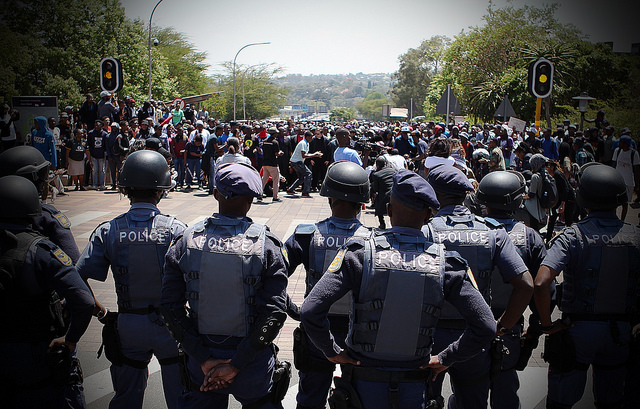 Police face off with student protesters near the Union Buildings in Pretoria, South Africa, on October 20, 2016. Credit: Denvor DeWee/IPS

The call for education to be free comes as South Africa’s economy flounders and its currency, the rand, lost a third of its value against the U.S. dollar. The country’s high youth unemployment rate of over 45 percent has exacerbated the problem, while South Africa remains the most unequal society in the world in terms of the rich/poor divide.

The Wits Student Representative Council warned that its members can no longer afford the tuition fees and early memoranda included the demand for free education, the scrapping of registration fees and for all security forces to vacate the university campus.

An impasse has now developed, with government saying it can’t allow unruly elements to destroy property and stepping up the number of police patrolling these venues.

Students have long led the struggle for change in the country. The most famous example is the 1976 Soweto uprising against apartheid linked to Afrikaans being used in education. Twenty-two years after democracy, students once again are making themselves heard and are focusing on higher education.

While making up around 80 percent of the population, black South Africans only account for around 25 percent of those studying at universities and the call for transformation underpins the Fees Must Fall movement.

But the protest movement has gained impetus in recent months and government has been largely unable to cope with the increased violence associated with the uprising. South African police officers have also claimed that criminals have infiltrated the protest movement, with a few to cashing in on the chaos.

‘‘It is evident that criminality has taken advantage of young people in the universities under the disguise of the #FeesMustFall initiative,” said police chief Lieutenant General Khomotso Phahlane on Oct. 6, although he provided no substantive proof to back up this view.

The state has also hardened its attitude toward the students, and succeeded in having former Wits SRC president Mcebo Dlamimi denied bail during a court hearing on Oct. 19 in Johannesburg. He’s charged with malicious damage to property and assault with intent to cause grievous bodily harm after footage emerged of Dlamini allegedly assaulting a police officer.

The protest has turned more violent with a security guard battling for his life after being beaten by youths in Cape Town, while in Johannesburg the head of the local Fees Must Fall organisation, Shaeera Kalla, was rushed to hospital on Oct. 20 after being shot numerous times with rubber bullets.

Soon after, Kalla thanked supporters on her Facebook page and vowed: “Even as we sit in hospital beds and others languish in prisons, I take strength from students across the country who are continuing the fight. Onwards and Upwards. Towards the immediate realisation of free, quality and decolonized education now.”

In a statement earlier in the week, the Wits SRC warned that “as the days go on, the brutality against students and repression at our universities continues to increase. Since Friday night, the levels of violence at Wits University have increased. Students, regardless of their involvement in the protest action, are being violated in ways we thought were unimaginable in a post-apartheid South Africa.”

The students have called on members of the public to denounce “the apartheid tactics that are being used, to speak out against the violations and brutality” while reiterating that their call for “free, quality, equal and decolonized education” was a legitimate one.

Civil society leaders, including the Council of Churches, have been mediating between the two sides and continue to try to solve what is now being called an impasse.

An inter-ministerial committee on university fees was set up by government but it initially only included the Higher Education Minister and leaders of the security cluster managed by President Jacob Zuma.

Finally, on Thursday, following the upsurge in violence, Finance Minister Pravin Gordhan was added to the list, which is regarded as a crucial step in order for the state to approach international donors of the bond market in order to find cash to cover student demands.