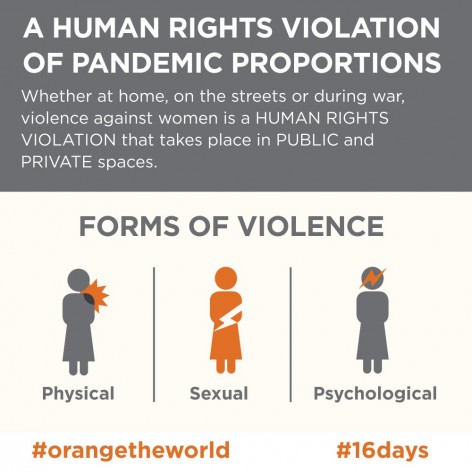 NEW YORK, Nov 25 2016 (IPS) - Each year on November 25, the International Day for the Elimination of Violence against Women is commemorated. A commemoration in essence is an opportunity to reflect on the challenges, prove that progress can be made and celebrate victories. It is also a reminder of the obligations and the responsibility we all must own at both the private and the public level to ensure that every woman, every girl, in all corners of the world lives in a world free of violence and fear. They must be enabled to enjoy their most fundamental right to physical integrity and security.

The reality today is grim. In every country, in every city or village, in conflict zones and refugee camps, in health pandemics like HIV or Ebola and humanitarian crisis due to cyclones or earthquakes, one out of three women are beaten, abused, stalked, assaulted, tortured, raped, trafficked and sexually exploited, coerced into slavery or becoming drug mules, so called honour killed, burnt alive for dowry and sold or forced into child marriage. This means over a billion women and girls of all ages are affected.

47 per cent of murders of women are committed by an intimate partner or family member, compared to less than 6 per cent of murders of men. Women represent 55 per cent of victims of forced labour and 98 per cent of the victims of sexual exploitation. Globally, an estimated 200 million women and girls have undergone FGM/C in 30 countries and 700 million were married as children
The necessary global norms and standards to end violence against women have been set. We have the Agreed Conclusions of the CSW 57 which set out a global plan of action on the elimination of violence against women and girls (EVAW), building upon the CEDAW, Beijing Platform for Action, the international Declaration on EVAW, the Regional Conventions – Belen de Para and Istanbul Conventions for example.

But the paradigm shift came as part of the Gender Equality compact in the first ever, universal, comprehensive and transformative 2030 Agenda for Sustainable Development adopted at the United Nations last year. It declared EVAW as essential for the achievement of sustainable development and enshrined EVAW in all its forms as Sustainable Development Targets in SDG 5 on achieving gender equality and empowering all women and girls, with linkages to other SDGs including SDG 16 on just and peaceful societies.

We know what the underlying causes of this very complex and pernicious phenomenon is. Harmful traditions, customs and cultural norms, gender stereotypes and inequality and patriarchal political, economic and social structures manifest themselves in this most egregious violation of women’s human rights. This in turn creates and perpetuates an environment of impunity for perpetrators. Men typically indulge in violence as an exercise of their inherent power, entitlement, superiority and a sense of ownership of women by them. This is the mirror image of the sense of vulnerability, fear, shame, helplessness, resignation and dependence felt by women and girls who are victims and survivors of such violence.

We now have insights on how we can change and demolish these structures that breed violence and despair for both women and their families and communities, hold them back from achieving their potential and leave them behind in every way. UN Women has worked with the international community to set out guidelines and tools for implementing the Four Ps of EVAW – Prevention, Protection, Prosecution of Perpetrators and access to justice for victims and survivors and Provision of critical services from helplines to one stop multi service crisis centers and long term rehabilitation and empowerment support.

Enactment of Laws, policies and special measures and their effective implementation including through targeted institutions and interventions by governments is vital. Movement building for mindset change and change in social norms by all sectors of society including the private sector, women’s organizations, youth, faith-based groups and men and boys is a necessary complement.

All of this of course requires investment – of political will, social capital and financial resources. And it’s worth it both from the perspective of the heavy human and material cost and hemorrhaging of resources violence against women continues to exact otherwise and the enormous social and economic benefits that ending violence brings with it.

Apart from the immense emotional and psychosocial cost of violence against women and girls, there are high economic costs. Beyond the direct medical and judicial costs, child and welfare support, violence against women takes a toll on household and national incomes and budgets and poverty reduction efforts. This is on account of lost opportunities for education, income, productivity and employment of affected women and girls. Annual costs of intimate partner violence alone were calculated at US$5.8 billion in the United States and US$1.16 billion in Canada. In developing countries these are several fold and underestimated.

In Australia, violence against women and children costs an estimated US$11.38 billion per year. Domestic violence alone costs approximately US$32.9 billion in England and Wales. Conservative estimates indicate that the cost of violence against women could amount to around two per cent of the global gross domestic product (GDP). This is equivalent to 1.5 trillion, approximately, the size of the economy of Canada. It should come as no surprise that domestic and intimate partner violence cause more deaths and entail much higher economic costs than homicides or civil wars.

Experience has shown that when women are free from violence and have the power to make their own choices, the chains of poverty can be broken, families and communities grow stronger, peaceful and secure, children are better protected and their chances of a better life becomes more viable, environmental awareness deepens, and opportunities for civic and political engagement based on inclusivity and socially constructive values are able to flourish. Thus allocating adequate and significantly increased resources to ending violence against women is not only a legal obligation and a moral imperative, but a sound investment too. 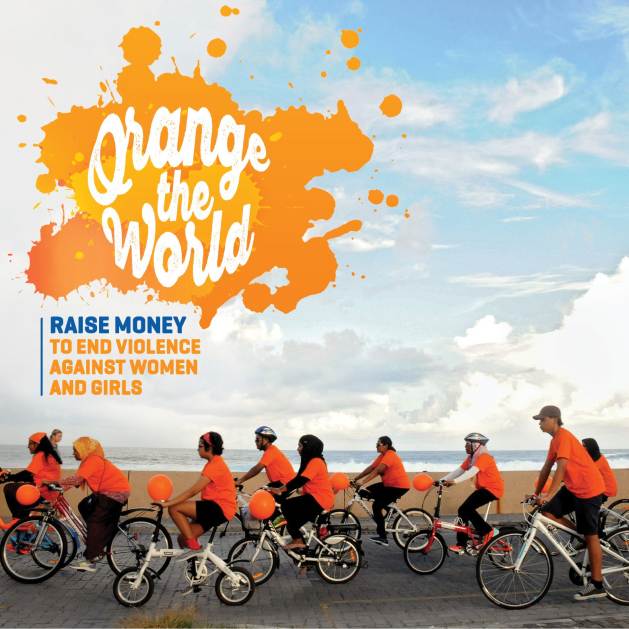 This is true for all communities on every continent. Despite this truth, in many parts of the globe women still face multiple forms of discrimination and remain undervalued and underutilized, violated and aggressed against. The resources dedicated to addressing the issue do not match the scale of the challenge let alone the scale and scope of the multiple benefits it will yield. It’s a global public good that must be delivered and invested in.

This is the theme of this year’s UNiTE to End Violence Against Women Campaign and 16 days of Global Activism being kicked off on 25th November 2016 to end violence against women and girls around the world. Today we want stakeholders to put money where their conviction is but also where most benefit women and girls as well as to the whole of society and economy. They must heed our call for transformative investment in gender equality, women’s empowerment and EVAW projects so we are able to fulfill the 2030 Agenda for Sustainable Development and truly build a future where no one is left behind.

With a focus on prevention, the UNiTE campaign last year involved over 450 events planned in more than 80 countries throughout the 16 Days of Activism in November and December. The UNiTE Campaign and its Orange Your Hood campaign was met with enthusiastic support from governments, civil society, media, and the public. Major monuments in several countries around the world were lit up orange to signal the widespread commitment to action to eliminate violence against women. The UNiTE and the 16 days of Activism reached 310 million people through social media in 2015—a tripling in comparison to the previous year.

While this represents a massive scale in terms of outreach and advocacy, today we want to translate this type of support into concrete commitments on investing in EVAW. Today we ask all stakeholders, to join forces with us and make use of the first-ever UN Framework for Preventing Violence against Women promoting a common understanding on preventing violence against women for the UN System, Member States of the UN, policymakers and other stakeholders.

UN Women has worked to develop a prevention toolkit for various sectors: media last year, the work place and sports sector in the coming year as well as Global a Guidance on Addressing School-Related Gender-Based Violence.

Today we want to encourage governments to place a stronger emphasis in improving national and regional capacities to collect internationally comparable prevalence data on violence against women in an ethical and methodological sound manner, according to available global standards. As UN Women has started to discuss a joint global programme with relevant UN agencies (UN Statistics Division, UNFPA, WHO and UNICEF) to build capacities of national actors to conduct these prevalence studies (and produce SDG target 5.2 indicators).

Today, we call on the international community to support UN-Women and other agencies and civil society work on the provision of essential services package for women and girls subject to violence. Through this programme, we are helping to develop global standards and guidelines, and tools for implementation, for quality service provision for survivors of violence, including domestic violence, across the health, police, justice and social services sectors. Another key initiative is the human rights- based safe city and safe public spaces programme aimed at preventing and responding to violence, including sexual violence against women and girls.

UN Women remains committed to drive a ‘conscience revolution’ thorough awareness raising and advocacy, to supporting changes in legal, political and social norms and their implementation, in building a solid data, evidence and policy based on what works in operationalizing transformative programs on the ground and in fostering strategic partnerships for movement building.

We need the international community to invest in our mission. We are the first generation in history with a real possibility to change the relations between men and women to create significant and lasting gender equality and end gender based violence. We are the first generation with a full understanding of the multiple and intersecting harm caused by violence against women and girls and their unacceptable cost – human and economic. We are also the first generation to have unprecedented and comprehensive political commitment and norms to develop the necessary strategies and tools and to have multi-stakeholder partnerships at our disposal to address this global pandemic.

We can and must be pioneers in demonstrating that violence against women and girls   – in homes, at work, in public spaces or even in the cyber world is not inevitable nor is the resulting harm, suffering and lost opportunity their inescapable destiny. We must ensure that all necessary resources are deployed and investments made to secure an Orange World and a Future free from the tyranny of violence against women and girls. This even as we must step it up for securing a Planet 50/50 latest by 2030.