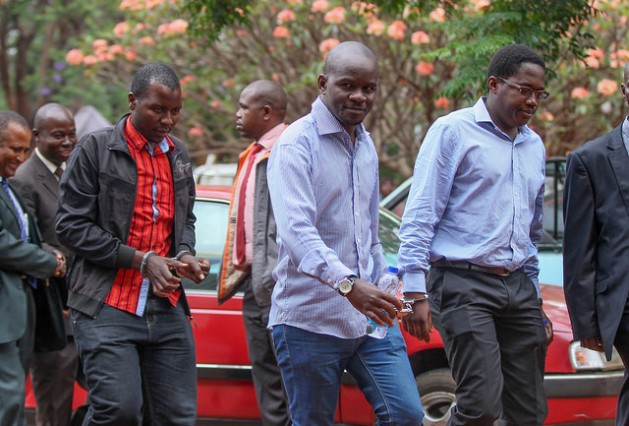 Journalists from the weekly Sunday Mail as they were arrested on Nov. 4, 2015 on charges of reporting falsehoods. Pictured from left to right in handcuffs are the journalists, who included the Sunday Mail reporter Tinashe Farawo, the paper's investigations editor Brian Chitemba and The Sunday Mail editor Mabasa Sasa. Credit: Jeffrey Moyo/IPS

Garnering over 400,000 followers on Facebook, Jukwa pierced the veil over freedom of expression in a conservative Zimbabwe. The enigmatic character, thought to be a mole within ZANU PF, remains unknown and has never been caught.

"The government is afraid the social media might be used the same manner it was used during the Arab Spring revolutions.” -- Njabulo Ncube, chair of the Zimbabwe National Editors Forum

Now the government – with a history of intolerance to dissent – is not taking chances with social media ‘dissidents’ in the ilk of Baba Jukwa. It is crafting a bill to clamp down on cybercrime and terrorism, but journalists fear the bill will trample the fragile freedoms of the press and expression in the country.

Should it become law, the Computer and Cyber Crime Bill will ensure that ‘abusers of social media’ are stopped dead in their tracks if statements by the government, the police and the army are anything to go by.

Commander of the Zimbabwe National Army, Lieutenant General Valerio Sibanda, recently told the government-run Herald newspaper that the army was training its officers to deal with “cyber warfare where weapons – not necessarily guns but basic information and communication technology – are being used to mobilise people to do wrong things.”

The country’s Information Media and Broadcasting Services Minister, Chris Mushowe, has dismissed fears that the Computer and Cyber Crime Bill will be a death knell for press freedom, but his threats reflect the opposite.

“This Bill is not intended to kill freedom of expression, it is not intended to silence people…If anything, this is intended to ensure we join other nations in fighting the threat of terrorism,” Mushowe told the local media following a briefing with the British Ambassador to Zimbabwe Catriona Laing in August. “We do not want information to be transited through Zimbabwe or information here that threatens the national security of other countries.”

Despite guaranteeing freedoms of expression and of the press under its new Constitution, Zimbabwe is not the most conducive of places for journalists to do their jobs freely, especially those working for the independent press.

The Washington-based media advocacy organisation Freedom House named Zimbabwe, alongside Bangladesh, Turkey, Burundi, France, Serbia, Yemen, Egypt and Macedonia, as countries which suffered the largest declines in press freedom in 2015 in its Freedom of the Press report for 2016.

Already burdened by a raft of laws that restrict access to information, journalists have reason to worry. The Computer and Cyber Crime Bill could be the biggest and meanest strategic weapon the government has yet unleashed on free expression and press freedom.

Information has become the political currency for self-expression. Social media, especially Facebook and WhatsApp, has given Zimbabweans an affordable platform to gather and share information, vent about their daily grind and even organise public actions against a deteriorating economic and political situation at home.
Crippled by a severe drought, Zimbabwe has made a global appeal for 1.6 billion dollars for food and other humanitarian aid as more than four million people will need food until the next harvest season in March 2017. Fears abound about a worsening economic situation when government introduces its own bond notes later this month as a measure to ease the current shortage of cash since dumping the Zimbabwe dollar and introducing a multi-currency regime in September 2009.

“The Zimbabwe government, which has a history of stifling political and civil liberties, particularly media freedom, must do the same,” Muleya told IPS. “The current Computer and Cyber Crime Bill must thus not be used as tool to snoop on citizens unduly and reinforce Zimbabwe’s image as a police state, but mainly protect people’s rights.”

Making a joke about President Mugabe, who is now 92, is no laughing matter in Zimbabwe and can land you in court or jail. Zimbabwe Lawyers for Human Rights has represented more than 150 defendants since 2010 charged with insulting President Mugabe. In most cases the charges were dropped. Videos pocking fun at President Mugabe have gone viral, prompting the government to denounce ‘the gutter journalism’ on social media it says should not be allowed in the mainstream media.

“Government is aware of activists in the country collaborating with the diaspora cyber terrorists. They must be warned that the long arm of the law is encircling them,” Mushowe told the Zimbabwean press.

Acting chairman Zimbabwe National Editors Forum and past Chairman of the Media Institute for Southern Africa- Zimbabwe Njabulo Ncube describes the Computer and Cyber Crime Bill as a nullification of press freedom.

“The future looks bleak with the seemingly proliferation of harsh media laws that seek to criminalise the practice of the journalism profession in Zimbabwe,” Ncube told IPS. “The government is afraid the social media might be used the same manner it was used during the Arab Spring revolutions.”

Ncube believes government has muddied the waters by creating the impression that cyber terrorism is the production of subversive, inflammatory and inciting messages shared through the social media, which was in fact misconduct online or abuse of social media in breach of the country’s contentious laws such as the Criminal Law (Codification and Reform Act), the Interception of Communications Act and Postal and Telecommunications Act (PTA).

“This continuous misleading of the citizenry on what constitutes cyber terrorism is aimed at instilling fear and self-censorship among citizens when exercising their rights to free expression, access to information and freedom of conscience,” Ncube said.

Despite government underplaying its effectiveness, social media has given Zimbabweans a loud voice to amplify their struggles. The crackdown on the social media is meant to deal with activists calling for reforms within the government, Executive Director of the Voluntary Media Council of Zimbabwe and Secretary-General of the World Association of Press Councils, Loughty Dube, argued.

“If the government intends to use the law to curb internet crimes there should be a clear demarcation that should show that there are no sinister intentions by the state to snoop on citizen communications and to criminalise those that are using internet platforms to seek reforms and expose government excesses.”

Last August and two months after the online campaign led by Pastor Evans Mawawire using the #This Flag successfully mobilized Zimbabweans to stay away from work, Zimbabwe passed the National Information Communication Technology (ICT) policy. The policy which allows government to snoop on its citizens and control cyberspace by putting all internet gateways and infrastructure under a single company it controls.

It is the cohesive power of social media that the Zimbabwe government seeks to weaken through a carte blanche law to snoop on and even shut down social media. While it may raise the cost of accessing social media, block its operation and resort to threats, government cannot control social media, argues, lawyer and political strategist, Alex Magaisa.

“In physical spaces, the state can always deploy anti-riot police and use physical force to drive away demonstrators expressing their view,” Magaisa wrote on his blog, The Big Saturday Read. “However, on social media, the state is not well equipped to handle users…Social media presents a new terrain over which the state has no control.

Magaisa said the Computer Crime and Cybercrime Bill would create very wide, vague and indeterminate offences in respect of social media activity, while giving police extensive search and seizure powers. Measured against the Constitution, which protects freedoms of communication and the right to privacy, Magaisa said the Bill falls woefully short and a number of its provisions in the present form could be stuck down by the Constitutional Court if challenged.

“While some of the purported reasons for introducing the Bill, such as protecting children, preventing racial and ethnic hatred sound noble, most critics believe the real motive which has promoted the rapid response is political. This is the cause of the citizen’s mistrust, suspicion and resistance in respect of the Bill,” wrote Magaisa.