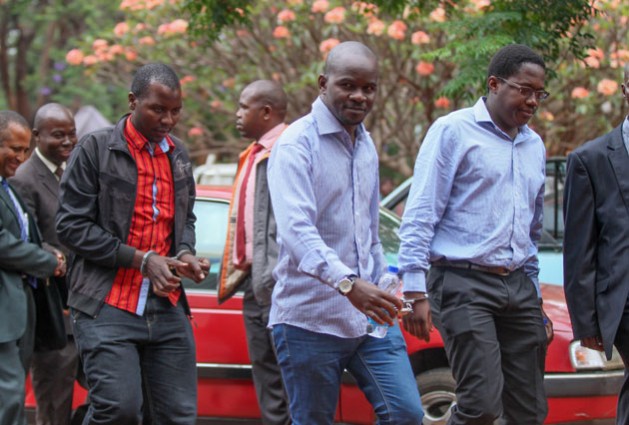 Press freedom has been shaken in Zimbabwe following the recent arrest of state journalists from the weekly Sunday Mail facing allegations of reporting falsehoods. Pictured from left to right in handcuffs, are the journalists, who include the Sunday Mail reporter, Tinashe Farawo, the paper's investigations editor, Brian Chitemba and The Sunday Mail editor, Mabasa Sasa. Credit: Jeffrey Moyo/IPS

HARARE, Zimbabwe, Nov 8 2015 (IPS) - Press freedom in this Southern African nation has been shaken abruptly, this time surprisingly, with members of the police force heavily descending on journalists working for state-owned media

But even then, the police crackdown on news reporters had already spiralled out of control here, raising the ire of rights and media freedom lobby groups.

The siege on journalists here apparently gathered momentum on March 9 this year at the disappearance of one renowned reporter who doubled as a human rights defender, Itai Dzamara, after he led protests calling for the immediate resignation of the Zimbabwean President Robert Mugabe for shattering this country’s economy.

Dzamara’s whereabouts are still unknown to this day.

Editor, Mabasa Sasa, his investigations editor, Brian Chitemba, and journalist Tinashe Farawo were arrested on November 2 facing charges of publishing falsehoods after implicating some senior police officers as part of a syndicate behind elephant poaching in the country’s Hwange National Park.

“This sends a clear message that the state is ready to embark on a blitz to any journalist who threatens the interests of the status quo. Again journalists in the private media should brace for the unthinkable as they are the real shooter box,” Terry Mutsvanga, an award winning Human Rights defender, told IPS.

“The sad development of the arrests of state journalists here is just a tip of the iceberg that as independent journalists we are set to be heavily monitored and controlled by state security agents,” freelance journalist, Tafadzwa Muranganwa, told IPS.

The three journalists were charged under Section 31 of the Criminal Law (Codification and Reform) Act.

The journalists’ ordeal is despite this country’s 2013 constitution enshrining the “freedom of expression and freedom of the media.”

Ironically, the recent arrest of Zimbabwe’s state journalists fell on the International Day to End Impunity for Crimes Against Journalists, as proclaimed by a United Nations General Assembly Resolution adopted at its 68th session in 2013.

Through the resolution, the UN’s member states were urged to promote a safe and enabling environment for journalists to perform their work independently and without undue interference, to ensure accountability, and to bring to justice perpetrators of crimes against the media.

Despite this call and the adoption of a Day against Impunity, the harassment of journalists in this Southern African nation continues unchecked.

Earlier in June this year, another Zimbabwean journalist, Patrick Chitongo was also arrested and sentenced to one year imprisonment for publishing an unregistered newspaper, the Southern Mirror.

Chitongo stood accused of violating Zimbabwe’s Section 72 (1) of the Access to Information and Protection of Privacy Act (AIPPA), although he was later released on 200 dollars bail.

“It’s the return to the old order of media repression meant to induce fear and self-censorship within the media. State institutions that include the police are increasingly showing disregard for the rule of law, more so very clearly pronounced constitutional guarantees on press freedom,” independent political analyst Rashwit Mkundu told IPS.

“We are very shaken indeed. In the past, the trend has been to harass journalists from the private media. We have received a rude awakening when journalists from the government-controlled media, which all along has been portrayed as sacred cows, are arrested. We have to be afraid, very afraid,” Foster Dongozi, Secretary General of the Zimbabwe Union of Journalists, told IPS.

Amnesty International, a day after the arrest of the Sunday Mail journalists, condemned their arrest, calling the move a shocking attempt to threaten press freedom.

“Arresting journalists on the basis of ‘publishing falsehoods’ has a chilling effect that may restrict the ability of the media to expose alleged criminal activities by the authorities,” Amnesty International’s Deputy Director for Southern Africa, Muleya Mwananyanda, said in a released press statement.

The arrests came hard on the heels of Zimbabwean President Mugabe’s spokesperson George Charamba’s remarks that the law was set to catch up with independent journalists whom he accused of behaving as political commissars of opposition political parties.

Whether or not the recent crackdown on state journalists will boil down to independent scribes remains to be seen.

Political analysts, however, believe it will.

“If government can intimidate state journalists, it means it is capable of doing the worst to independent journalists,” Mlondolozi Ndlovu, an independent political analyst, told IPS.

Ndlovu also said factionalism in the country’s ruling Zanu-PF party may have fuelled the persecution of journalists as politicians scramble to assert their powers at every iota of the Southern African nation.

True to Ndlovu’s word, President Mugabe last month moved to attack the country’s press freedom when he berated private newspapers for reporting on factionalism that is threatening to rip his ruling Zanu-PF party.

Even Charamba went on record upping the private media onslaught, accusing local independent newspapers of being “appendages of the opposition wishing ill on the ruling party.”

But the attack on press freedom is not alien to Zimbabwe. Eight years ago, freelance journalist Edward Chikombo, who until 2002 worked as a cameraman for the Zimbabwe Broadcasting Corporation (ZBC), was murdered by unknown assailants for allegedly smuggling video footage of a badly-beaten Movement for Democratic Change (MDC) leader, Morgan Tsvangirai.

Chikombo was also believed to have sent to foreign media images of police brutality against supporters of the opposition MDC.

The fear gripping journalists here has cascaded down to civilians, who dread they may also be the defenceless target amid the mounting intimidations of media practitioners here.

“If state security agents can arrest journalists who drive the information in the country, it merely means even our freedoms to express ourselves on matters affecting us as ordinary people are not guaranteed and police may also pounce on us,” Lina Chikosha, a resident from Kuwadzana Extension high density suburb in Harare, the Zimbabwean capital, told IPS.