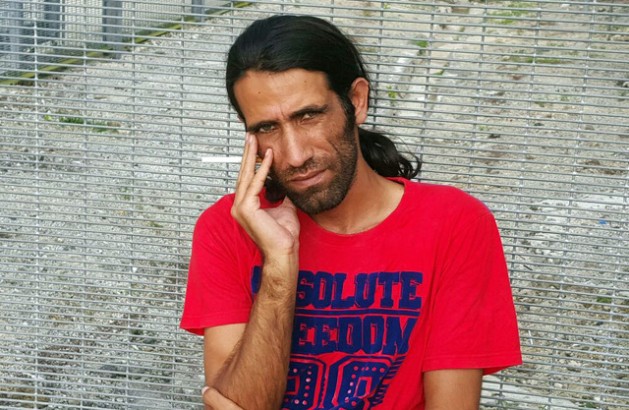 Journalism is the reason Boochani was forced to flee his home country of Iran, and – like the other 900 men detained indefinitely on Manus Island – seek refuge in Australia.

“When the Australian government exiled me to Manus Island I found out that they are basing their policy on secrecy and dishonesty,” Boochani told IPS.

“In my first days here I started to work to send out the voice of people in Manus. Why did I start? Because the Australian government’s policy of indefinite detention is against my principles and values, and against global human values.”

“I know that I am a refugee but I'm a journalist and writer too. I have been denied my identity as a journalist because of this refugee concept and most of the media don't care about that." -- Behrouz Boochani

Boochani worked as a freelance writer in Iran and founded the magazine Werya, devoted to exploring Kurdish politics, culture and history. In February 2013 the offices of Werya were raided by the paramilitary agency the Islamic Revolutionary Guard Corps, also known as Sepah, classified by the US government as a terrorist organisation.

Boochani was in a different city when 11 of his colleagues were arrested. The story he wrote about the raid on the website Iranian Reporters quickly went global and put him in the government’s sights and he fled.

Boochani spent his first two years in detention writing and publishing articles under a fake name, for fear of losing the mobile phone that has been his lifeline since arriving on Manus Island.

“We were not allowed to have phones until April this year,” he explains. “The guards twice searched my room looking for my phone. After two years of sending out my work in this way I felt that I had become part of Australian society and with the support of (international organisations) PEN International and Reporters Without Borders, I started to use my real name. I would never say that I’m not scared, but I say that fear is not powerful enough to stop me or prevent me from working on my mission. It’s my duty to document all of what happens here.”

What has been happening on Manus Island has attracted global condemnation. In May the UN Human Rights Council condemned the detention centre and Papua New Guinea affirmed that it would be shut down. Since then, the Australian government have declared the centre ‘open’, meaning that inmates can come and go freely though they cannot leave the island. Boochani and other detainees have spoken of being encouraged to accept residency in Papua New Guinea, despite attacks on detainees from both local residents and police forces. Returning to Iran, Boochani says, is not an option.

“PEN International and a coalition of human rights groups launched an international campaign on behalf of Mr Boochani in September 2015. The campaign called for Mr Boochani’s request for asylum to be processed by Australian immigration officials as soon as possible and urged the Australian government to abide by their obligations to the principle of non-refoulement—as defined by Article 33 of the United Nations Convention relating to the Status of Refugees. Despite numerous approaches to the Australian government and relevant ministers and departments, by the campaign coalition and its supporters, there has been no response from senior government officials.”
– PEN International letter to Australian Minister of Immigration Hon. Peter Dutton MP, November 3, 2016

“The political situation in Iran does not change especially for Kurdish people. There are about 20 journalists still in prison there. In November, the United Nations General Assembly adopted a resolution against the Iranian regime for violating human rights. Last year they hanged more than 1,000 people. How can I go back?”

Since arriving in Manus Island, Boochani has written for Australian and international newspapers and radio programs and co-directed the feature length documentary about life on Manus Island Chauka, Please Tell Us the Time. He has continued to write articles about Kurdish culture and politics for Kurdish media, published poetry and essays, contributed to two forthcoming books and completed his first novel, due in mid-2017.

One of the greatest challenges facing Boochani is what he calls “the refugee concept”, the willingness of Australian and international media to use his insight and words but to cast him as a “broken man” or a refugee.

“This is a big form of censorship,” he says. “I know that I am a refugee but I’m a journalist and writer too. I have been denied my identity as a journalist because of this refugee concept and most of the media don’t care about that. When I have found a subject for a story and provided information and documents to other journalists sometimes they have ignored me, or other times they published a story on the basis of my information but denied my identity by referring to me only as a refugee. I’m doing the same job as other journalists in Australia or anywhere else, but I am always called a refugee.”

Overcoming the international concept of Australia as a peaceful, law-abiding nation with a relaxed attitude to life also presents a difficulty to Boochani as a journalist. “We are being tortured by a western country and the media and human rights organisations find it hard to believe that a country like Australia is implementing policies that are the same in many ways as Iran or Saudi Arabia,” he says. “I am a prisoner like the others here. It’s hard to work in this situation. I have to endure prison and torture and at the same time work as a journalist or human rights defender.”

The Manus Island detention centre holds around 900 men, most of whom are refugees intercepted en route to Australia having fled conflicts in countries such as Sudan or Syria, or persecution as is the case with Rohingyas from Myanmar.

The detention centre is a key part of a multi-billion-dollar bilateral agreement between the Papua New Guinean and Australian governments. Condemnation of Australia’s offshore detention of asylum seekers has come from several branches of the United Nations including the High Commissioner for Human Rights, the Committee Against Torture, the High Commissioner for Refugees, the Special Rapporteur on torture and the Special Rapporteur on the human rights of migrants.

While identifying as a journalist and writer, Boochani is not motivated by profit.

“If I do work for money, I will lose my way. The important thing is to send out a voice from Manus and let people know the reality.”

“I am a journalist, I am a writer, I am a prisoner. The history of this prison is written in my hand … I am here with only a phone and my tongue and say:  I am more than you know. The Australian government made a mistake exiling a journalist to this prison and keeping him as hostage.  Writing is my mission, my work, it is me.”

Correction: An earlier version of this article said that the UN Human Rights Council had declared Manus Island Detention Centre illegal. The council condemned the centre, and in response the PNG government declared it illegal.