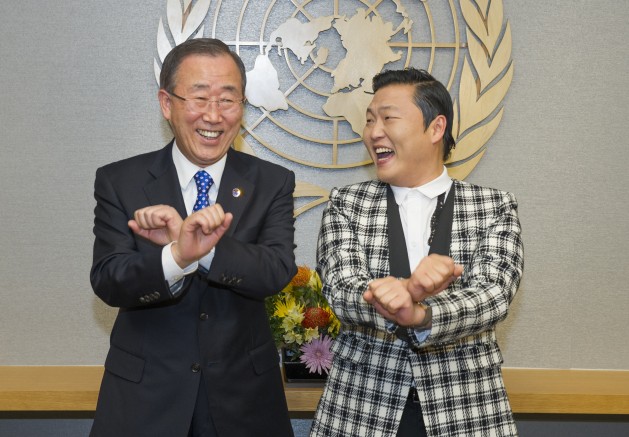 “I’ll be in Times Square for the ball drop. Millions of people will watch me lose my job.” Ban wrote beforehand on Twitter, hinting at possible relief that years of ribbon-cutting, handshaking and selfie-taking were finally over.

Ban – a former foreign minister of South Korea and career diplomat – seemed to embrace these ceremonial duties tirelessly during his two terms as Secretary-General.

However, when it came to some of the bigger responsibilities of the role, some critics argue he could have done more.

UN Secretaries-General have to tread a delicate path of diplomacy and bureaucracy. They are servants to the UN’s 193 member states, but they also have a responsibility to be a “true voice” of the UN Charter, Stephen Lewis, co-founder of international advocacy organisation AIDS-Free World, told IPS.

“Ban is a traditional diplomat to his bone marrow. He always felt that offending big powers was a taboo,” -- Richard Gowan.

“With the world in the state it now is in, we need a Secretary-General who speaks truth to power, who speaks his mind, who takes strong positions, and that has not been characteristic of the last several year of Ban Ki-Moon’s tenure,” said Lewis, who is also a former Deputy Executive Director of UNICEF and a former Canadian Ambassador to the UN.

Lewis said that Ban could have done more to follow in the footsteps of former Secretaries-General such as Kofi Annan of Ghana or Dag Hammarskjold of Sweden, two Secretaries-General admired for their ability to stand up to UN member states when needed.

“It’s the difference between someone who’ll use the middle ground to try and satisfy everyone and someone who says, my job is to lead this world in a principled way, upholding the charter and telling the member states when they’re wrong and when their human rights are being violated,” said Lewis.

The charter is the founding document of the United Nations which was established in 1945 in the wake of the Second World War.

UN expert at the European Council on Foreign Relations Richard Gowan agreed that Ban chose to be diplomatic rather than disagree with UN member states.

“Ban is a traditional diplomat to his bone marrow.  He always felt that offending big powers was a taboo,” said Gowan.

However Gowan – who has followed Ban’s tenure closely – noted that over time Ban began to take stronger positions.

“I do think Ban got better over time. After the 2009 Sri Lanka crisis he felt compelled to highlight serious human rights abuses. He is a moral man.”

However overall, Gowan said that Ban was considered too cautious in the face of major crises facing the UN. These include ongoing conflicts in Syria and South Sudan.

“The constant refrain I have heard from UN officials over the last decade has been that Ban has been too cautious and too concerned about protecting his own position in the face of major crises,” said Gowan.

However while Ban may have only had limited influence over the UN member states’ responses to the world’s protracted disasters he did have responsibility for how the UN responded to them.

This includes oversight for UN peacekeepers – whose numbers swelled to over 100,000 during Ban’s tenure.

UN peacekeepers have faced scandals, including allegations of sexual abuse, however it is the UN’s tepid response under Ban’s leadership to problems within peacekeeping that has attracted the most criticism.

Gowan argues that the UN’s responses under Ban seemed in part to reflect his lack of understanding of the operational intricacies of the UN.

“Secretaries-General are not magicians.  The UN bureaucracy is hard to manage, and peace operations are especially difficult to control,” said Gowan. “But Ban never seemed to have a detailed operational sense of what the UN has been doing on the ground on his watch.”

“When a big crisis hit a UN mission, or a sexual abuse scandal blew up, he always seemed to be on the back foot. I credit him with trying to do the right thing over cholera in Haiti, but he was slow.”

UN peacekeepers from Nepal responding to the 2010 earthquake bought cholera to Haiti in part because untreated sewage from a UN base ran into local water sources.

At the beginning of December 2016, soon before ending his time as Secretary-General, Ban apologised for cholera outbreak, but stopped short of accepting the UN’s role in bringing cholera to Haiti.

“His apology was very much characteristic of the middle ground that satisfied only part of his role,” said Lewis. “He never accepted the responsibility for the UN bringing cholera to Haiti. He only ever apologised for the consequences of the cholera. In other words he stopped short of embracing an important matter of principle.”

This may have been because a full apology could potentially open the UN and its member states to paying reparations to the people of Haiti, thousands of whom have already died due to the cholera outbreak.

Nevertheless, many saw Ban’s apology as an attempt to make amends for one of the darkest aspects of his ten years as Secretary-General.

His tenure did see progress made in other areas, for example Ban was considered to have progressed LGBTI rights within the UN by openly showing his support.

Ban’s successor Antonio Guterres, the former Prime Minister of Portugal, took office on 1 January, beginning his five year term with a message of peace to the world.

“We’re hoping that Guterres will be a Hammarskjold,” said Lewis, referring to the Swedish Secretary-General who is admired by many UN aficionados for his dedication to the UN charter.

Ban is widely considered to be vying for the Presidency of South Korea.