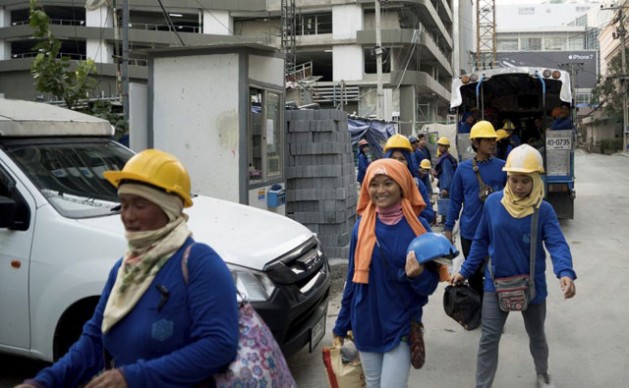 But, the need of the hour is a rights-based comprehensive approach placing the human rights of migrants at the center of the discussion to halt and roll back overall deterioration of treatment of migrant workers, worldwide, in particular, women migrant workers and children.

Evidence suggests that the world is on the eve of far greater international mobility largely due to work force decline and population ageing, coupled with low birth rates in many industrialized countries. Migrants will be even more essential to address labour market needs and the sustainability of economic development in many countries.

But as we all know, migrants move due to a number of reasons. Migration is not only due to economic factors, but man-made disasters and conflicts can drive them in large number as we observe now.

As underscored by many Human Rights defenders, human rights abuses play a crucial role in decisions to migrate, in particular by women.

Out of more than 244 million migrants throughout the world, half are women, and an estimated 20 percent are in an irregular situation. In some countries like Sri Lanka and the Philippines, female migrant workers leaving for work abroad are much more than half of those leaving.

And in overall, international migration is becoming increasingly feminized as more women are migrating on their own volition, seeking economic and social opportunities and empowerment through migration.

Most women contribute more than men in destination countries in professions, such as care-givers while contributing even more to the well-being of their families in their countries of origin. But, women migrant workers are particularly at risk of discrimination, abuse and exploitations.

They receive wages that are under the minimum baseline, and are victims of fraudulent practices, excessive working hours and even illegal confinement by their employers. Sexual harassment, threats and intimidation against them are rampant.

Meanwhile, number of women migrant workers committing suicide is on the increase. Abuses of women migrant workers are more intensified when their immigration status is irregular. They are often denied the most basic labour protections, personal security, due process guarantees, health care and, education for their children. They often face abuse and harassment at international borders based on race, identity and age. And often they risk being trafficked, enslaved or sexually assaulted.

Domestic female migrant workers are a most vulnerable group. According to the ILO, 53 million women and girls around the world are employed as domestic workers in private households. They clean, cook, care for children, look after elderly family members, and perform other care giving essential tasks for their employers.

Despite their important role, they are among the most exploited and abused workers in the world. They often work 14 to 18 hours a day, seven days a week, for wages far below the minimum wage. And their work is often not recognized as work under national labour codes.

Their work is not quantified in financial terms and therefore not adequately compensated. They may be locked within their workplace and subject to physical and sexual violence for lack of means for seeking formal protection normally available for other women in formal sectors of employment.

Therefore, policymakers and other stakeholders in every country must adopt a gender-sensitive and rights based approach in developing labour migration laws and policies in line with the core human rights treaties, and in particular CEDAW and CMW, as well as relevant ILO labour standards.

These human rights instruments relevant to migrants seek to achieve gender equality and protection for women and girls irrespective of age, sexuality, race, disability, migration status and other identity markers.

National and local laws and policies should be evolved to guarantee that human rights, including labour rights, are enjoyed equally by men and women migrant workers and that migration legislation, policies and programmes must promote equality of opportunity and treatment in respect of employment and occupations with a view to eliminating any discrimination based on sex.

The Convention sets out the best strategy to prevent abuses and address challenges faced by female migrant workers. It provides guidance for elaborating of national migration policies for international co-operation based on respect for human rights and the rule of law.

In addition to setting minimum obligations for the protection of migrant workers and members of their families, the Convention is a helpful tool for governance of migration. The Convention explicitly provides a framework for human-rights based policy-making on migration, including irregular migration and female migrant workers.

The treaty body of the convention, the “Committee on Migrant Workers” (CMW) seeks to encourage its State parties and all stakeholders to work towards reaching standard enunciated in this convention and other relevant international instruments. And CMW in its general comments have elaborated guidance as to how States can implement their obligation with respect to migrant domestic workers, in particular, females.

CMW regularly advises States to ensure that they develop effective pre-departure and awareness-raising programmes for female workers who have made the decision to migrate, with briefings on their rights under the relevant human rights treaties in force, including CMW, as well as the conditions of their admission and employment and their rights and obligations under the law and practice of the receiving States.

Among other measures, CMW encourage countries of origin to enter into agreements with States of destination for the establishment of standard, unified and binding employment contracts with fair, full and clear conditions and labour standards that are enforceable by systems of law in countries of origin and employment; and to ensure that consular offices are trained to assist female migrant workers, and to provide counselling and guidance for submitting complaints; and encourage States to regulate and monitor recruitment agencies to ensure that they respect the human and labour rights of women migrant workers.

CMW also advises States to repeal sex-specific bans and discriminatory restrictions on women’s migration on the basis of age, marital status, pregnancy or maternity status, including restrictions that require women to get permission from their spouse or male guardian to obtain a passport or to travel or bans on women migrant workers.

The issue of detention of female migrant workers is yet another punitive measure that is often abused by authorities in many countries. The convention attempts to make migration for work as a positive and empowering experience for individuals and their societies, contributing to economic progress and human development both at home and in destination countries.

Today’s dramatic migration crisis underscores the urgent need to begin a more honest discussion about the obstacles to ratification of the Migrant Workers Convention. The Convention at present has only 50 State parties, and most are States of origin of migrant workers, and destination countries by not ratifying the Convention are conspicuously avoiding the human rights standards of the Convention.

A clear vision of the need for migrant labour in destination countries, with more channels for regular migration, as well as for family reunification, would assist greatly in preventing the exploitation and other dangers faced by female migrant workers and to enable them to live a life in dignity.